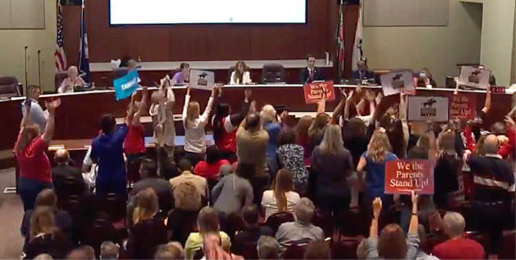 Stop reading for a moment. Go get some popcorn, and then sit back and enjoy two rousing videos of heroes pointing their sharpened spear tips right at the rhythmically contracting cardiac tissue of two government re-education camps (so much better to spear the pulsating cardiac organ of leftist schools than that of humans in their mothers’ wombs).

For those who prefer reading, here is some of what former Pennsbury School Board member Simon Campbell said:

This is my comment, not your comment. I’m quoting to you now from the United States Supreme Court, 1964 case, New York Times versus Sullivan. This is constitutional case law in this country. … The judges wrote that this nation is founded on the “profound national commitment to the principle that debate on public issues shall be uninhibited, robust and wide open, and that it may well include vehement, caustic, and sometimes unpleasantly sharp attacks on government and public officials.” That’s constitutional case law in this nation. I don’t have to be nice to you. Nobody behind me has to be nice to you. If you don’t like living in the United States of America, then you can all move to Russia, Cuba, or China. This is the First Amendment. …

There are emails, public record emails, in which the director of equity is lobbying and advocating for public comment to be censored in this school district. … We’ve got the school board president saying she’ll do better at hitting the mute button in blatant violation of the constitution for her lobbying and her advocacy of unconstitutional censorship. I want you, the school board, to terminate the employment of (director of equity] Dr. Cherrissa Gibson with immediate effect. And after you’ve terminated her employment, I want all of you to tender your resignations for hating on this country. We have a God-given constitutional right to critique you, and we can speak in any lawful tone that we see fit.

I recently wrote about the growing resistance to the usurpation of public schools for leftist ideological purposes. The resistance movement is spreading and growing in both intensity and numbers. For decades there have been spear-wielding soldiers fighting the good fight, but, shamefully, the troops that should have been marshalling behind those on the frontlines did nothing. They didn’t back the courageous men and women on the frontlines. They sat home fearful and semi-embarrassed of their conservative brethren, rationalizing their cowardice as the ideological malignancies metastasized in schools.

I have learned the sorry lesson over the past 20 years that adults are as fearful of ostracism and needy for peer approval as the neediest teen, and as a result, many conservative Americans do not treat their conservative beliefs as if they believe they’re true. Many conservatives fear the stink-eye of the cool crowd more than the all-seeing eye of the creator of the universe who has the power to destroy body and soul.

Here’s the deal, people are not only cowed by the madding crowd. They can also be inspired by boldness and fearlessness. The willingness to endure the slings and arrows of the cool crowd sets an example for others to emulate. Leaders inspire and galvanize others to walk the hard path.

Career military officer, Purple Heart recipient, attorney, and former Virginia State Senator Dick Black recognizes the evil being done to children, and at a recent Loudon County School Board meeting, Black properly—that is, passionately—expressed what all decent people should be expressing at school board meetings all across the country:

You retaliated against (P.E. teacher) Tanner Cross for addressing a public hearing of this board. The judge ordered you to reinstate Mr. Cross, because if his comments were not protected speech, then free speech does not exist at all. It’s absurd and immoral for teachers to call boys girls and girls boys. You’re making teachers lie to students, and even kids know that it’s wrong. This board has a dark history of suppressing free speech. They caught you red-handed with an enemies list to punish opponents of Critical Race Theory. You’re teaching children to hate others because of their skin color. And you’re forcing them to lie about other kids’ gender. I am disgusted by your bigotry and your depravity.

Immediately after Mr. Black’s comments, the school board shut down public comments and walked out, leaving scores of people unable to make their comments.

Who needs Netflix, when you’ve got warriors with spears poking leftist school board members and backed up by troops who have finally reported for active duty?

Wall Street Journal reporter Abigail Shrier, who wrote the critically important book Irreparable Damage on the staggering explosion in the number of adolescent girls joining the “trans’-cult, recently wrote an article expressing her frustration with the passivity of people who know how damaging “trans”-cultic beliefs and practices are to children and yet say nothing:

[I]f you read my inbox, you’d think I was popular, awash as I am in secret fan mail and “silent supporter” notes. …

Child and adult psychologists and psychiatrists write to say they have witnessed a surge in transgender identification among teen girls who seem to be acting under peer and social media influence. Teachers write to say they believe that the phenomenon is plainly an example of social contagion within their classrooms. Surgeons and pediatricians and endocrinologists write to wonder aloud at what has happened to their profession.

There are lawyers who posit that lawsuits are on the way—brought by others, presumably. Professors who have come to hate their jobs—you can’t discuss your own research without trampling on a young generation’s vast neural network of sensitivities. Journalists at our most storied newspapers, TV networks, and literary magazines, even at NPR, write to tell me they liked my book, they agree with it, and to tut-tut the abuse directed at me. They assure me that the horrible accusations—from child predation to white supremacy and transphobia—accusations that will forever live on the internet, blackening my name, are things no one really believes. …

And so, for over a year, I responded to those silent supporters with thanks and reassurance. You don’t have to speak out, just send me your documents — I will expose it for you. No need to stand up for me publicly, just tell me what you know. For a while, this seemed a decent bargain. …

[I]t is easy to justify our silence. We tell ourselves that we are protecting our families by remaining quiet and in the short-term, and we may be. But we are also handing our children over to a culture in which freedom of conscience and expression are drowned out. We are teaching our children that truth shouldn’t be our primary concern—or at least, that truth is negotiable or subordinate to being agreeable. They are learning that it is more important to remain acceptable to the powerful than to be truly free. …

[T]he inescapable reality is that defeating this ideology will take courage. And courage is not something that can happen in private. Courage requires each one of us to speak up, publicly, for what we believe in. Even when—especially when—it carries costs.

Christians are expected by God to take up our crosses daily, even when doing so carries costs.

The only regret I have when watching these school board meetings during which arrogant and morally vacuous board members are feeling the righteous wrath of community members is that the guiltier parties are getting off scot-free. Faculty activists have been scurrying around like unseen roaches, seeding their false, destructive, and evil ideas in the minds and hearts of other people’s children using taxpayer money to do their dirty work.

And it is dirty.

So, I respond by saying that I will credit their claims if they can show evidence of the following: that in leading their lives today they have stood up for the rights of unpopular victims of injustice whose very humanity is denied, and where they have done so knowing: 1) that it would make them unpopular with their peers, (2) that they would be loathed and ridiculed by powerful, influential individuals and institutions in our society; (3) that they would be abandoned by many of their friends, (4) that they would be called nasty names, and that they would risk being denied valuable professional opportunities as a result of their moral witness. In short, my challenge is to show where they have at risk to themselves and their futures stood up for a cause that is unpopular in elite sectors of our culture today.

Can you, kind reader, show evidence that you stand up for culturally unpopular causes at great personal cost?