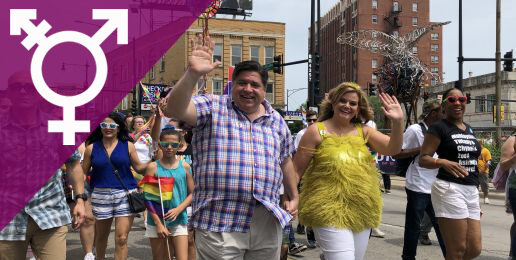 In June 2019, Governor J.B. Pritzker issued an executive order that should have been the proverbial straw that broke the backs of already oppressed conservative families with children remaining in our broken school indoctrination centers. The order had two parts.

The first part mandated the establishment of a “trans” task force whose members “have experience or expertise related to supporting transgender, nonbinary, and gender nonconforming students in schools,” and who would concoct the many and diverse ways that government schools must participate in the “trans”-cultic fiction.

The second part mandated that the Illinois State Board of Education “develop and make publicly available a model policy or procedures” that does the same thing as the “trans” task force was charged with doing.

Take note of the unstated assumptions embedded in the words “related to supporting” sexually confused minors in the executive order. In the Upside Down, where Pritzker and his collaborators live, “supporting” does not mean helping minors accept their immutable biological sex and scientific reality. Oh no, “supporting” means affirming their sexual confusion and their rejection of objective reality.

The recommendations were posted in Jan. 2020 and are as destructive as all “trans”-cultic beliefs are.

They include the following:

The task force recommendations also include this remarkable statement about student privacy:

Under state and federal law, the discomfort or privacy concerns of students, teachers, or parents are not valid reasons to deny or limit the equal use of facilities by transgender, nonbinary, and gender nonconforming students. Rather, the interest of any student seeking more privacy should be addressed by providing that student a more private option upon their request. “The prejudices of others are part of what the [Human Rights Act] was meant to prevent.” …  “[T]here is no right that insulates a student from coming in contact with others who are different than them or a Bathroom Privacy Act, unless the behavior violates a school policy or is criminal.” … The presence of a transgender student in a locker room simply does not “implicate the constitutional privacy rights of others with whom such facilities are shared.”

Note the obfuscation: Boys in girls’ locker rooms are described as merely “different.” By not specifically identifying the nature of this difference, the “trans” task force avoids discussion of whether sex differences have any meaning relative to undressing.

Who—you may be wondering—concocted these God-forsaken policies? Serving on this ideologically non-diverse task force of 27 people were 3 recent high school graduates and 2 then-current high school students. So, five leftist students were involved in setting policy for all Illinoisans but not one conservative adult was involved.

One of the propagandists was A. J. Jennings an early childhood education teacher at the University of Chicago Lab Schools, who wrote about her goal of using her classroom to indoctrinate other people’s children with her sexuality ideology:

As an educator (and a person), I value conversation as a way to build understanding and transform perspectives. It is an incredible curricular tool for addressing issues of identity (e.g., race, class, size, gender, sexuality, ability, religion). It can be especially meaningful when our students initiate the conversations. So I work to create a classroom environment where differing points of view can be addressed and explored. My goal is for the children to feel confident about articulating their point of view and safe enough to consider other perspectives. As teachers. … we can model nonjudgmental behavior and challenge binary thinking.

This is especially significant in early childhood education. As young children develop their understanding of the world, they tend to rely heavily on binaries. If we understand the binaries a child is working within, we can encourage that child to think of counterexamples or introduce counterexamples ourselves into the conversation. These provide useful stumbling blocks that encourage them to expand their thinking.

Jennings also provided an illustration from her own class of 4-year-olds on exactly how she leads little ones, baby step-by-baby step, into her dark world of ignorance while they are yet too young to understand sexuality issues in their moral, ontological, and epistemic complexity:

One day, Rory approached me during playtime, visibly shaken. “Those kids are telling me that girls can’t marry girls and they can!”

“Well, let’s go and talk with them about it,” I responded. When we reached the two girls, I told them that Rory was worried about the conversation they were having and asked what they were talking about. I learned that, just as Rory reported, the two girls had been discussing marriage and how girls couldn’t marry girls. Rory had been insisting they could. He was certain of it. His mom had told him. The other two were skeptical. They all looked to me to clarify this point of contention. …

I was delighted to be a part of the conversation. …  I generally feel that when talking about marriage, most children mean adults loving one another, so I went that route.

“Two girls can be in love with each other,” I responded.

“Yeah!” agreed Rory, vindicated by his teacher’s affirmation of this point.

“Like my mom and dad love each other,” one of them answered.

“Right,” I said. The kids continued their conversation of marriage and were no longer looking for my input. I listened for a few more minutes as they tossed around the idea that love might not be constrained to a mom loving a dad. Rory mentioned that he had a friend who had two moms who were married. The other two children were willing to accept this and incorporate the new information into their understanding of the boundaries of love and marriage.

There you have it. Binaries successfully challenged. Perspectives changed. Love is love, man. And no need to introduce the confounding ideas of different types of love. This “teacher” is one of the people setting policy for all Illinois public schools.

Here are a few more members of Pritzker’s Posse Propagandus:

Jax Wokas is a girl who pretends to be a boy and is committed to “intersectional activism.”

Jordon Eason is a girl who pretends to be a boy. She testified on behalf of a male student who pretends to be female—“Nova” Maday—in Maday’s  lawsuit against District 211 and conservative community group Students and Parents for Privacy. Maday was suing for the legal “right” to have unrestricted access to girls’ private spaces.

Benton Goff is a girl from Marion, Illinois who pretends to be a boy and is also a “trans”-activist.

Tre Graham is a cross-dressing boy from Marion, Illinois who identifies as “genderqueer.” Here’s a Dec. 2020 tweet from Graham:

Yes, this is the kind of young person Pritzker thinks should set policy for all Illinois schools.

Graham and Benton Hoff have been friends for years, so, the “trans” Posse Propagandus is not even finding a diverse cross-section of current students/recent grads. Of the five students on the Posse, all are activists and two are from the same social group.

Myles Brady Davis is a Chicago woman who pretends to be a man who is married to a man who pretends to be a woman. So, they are a heterosexual couple deeply involved in cosplay. Davis like many cross-sex narcissists manages to get herself in the press—a lot—most recently for the perfectly natural thing for women to do. She gave birth. The Chicago press refers to Davis and her husband as a “trans” power couple.

Jamie Gliksberg is a senior attorney with Lambda Legal, a law firm that self-identifies as a “civil rights” organization and is dedicated to the proposition that all sexually deviant men and women are more equal than the rest of society.

Channyn Lynne Parker is a man who pretends to be a woman and identifies as a “human rights advocate” even as he works like the devil to deny women and men the right to be free of opposite-sex persons in private spaces. He also works for the “LGBT”-affirming Howard Brown “Health” Center.

Jordee Yanez is a young woman and former CPS student who pretends to be a man.

Veronica Noland: Her name should be familiar to regular IFI readers. She’s the Illinois School District U-46 board member who referred to parents who oppose co-ed locker rooms as “narrow-minded fear mongers.”

Mika Yamamoto is the mother of a 10-year-old boy who pretends to be a girl. His parents, mother Yamamoto and father Brian Freireich, have renamed their son. His new name is “Admiral Ocean Freireich.” The family moved from Chicago to Oak Park, which jumped aboard the “trans” train long ago.

We cannot expect culture to improve if we keep placing our children under the tutelage of activists who teach children that body- and soul-destroying sexual deviance is good. Remember, these “trans” recommendations are in addition to the Illinois law requiring that all children in grades K-12  be taught positively about homosexuality and “trans”-cultism.

Parents, the fix is in. Get out now.