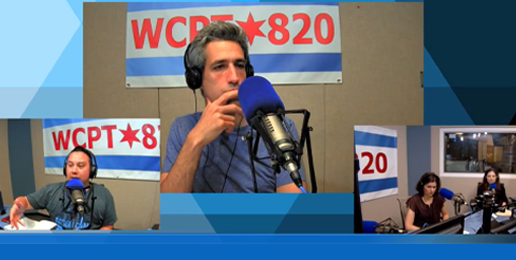 Former Illinois state senator Daniel Biss recently guest-hosted a culturally regressive radio program titled “Live, Local & Progressive” in which he sought to draw attention to yet another God-forsaken executive order (2019-11) from Illinois’ morally bankrupt governor, J.B. Pritzker, which was signed “shortly before the Pride parade.” The executive order establishes a 25-member “Affirming and Inclusive Task Force,” essentially to use government schools to advance the ideology and goals of the “trans” cult.

Lest anyone think the task force will be ideologically balanced between those who believe biological sex matters when it comes to, for example, private spaces and athletics and those who believe it doesn’t matter, here’s what Pritzker’s order dictates:

The Task Force shall consist of at least one representative from the Office of the Governor and no more than twenty-five (25) members, selected by the Governor, who have experience or expertise related to supporting transgender, nonbinary, and gender nonconforming students in schools including, but not limited to, students, parents or guardians, teachers, school administrators, lawyers, medical professionals, and representatives from community-based organizations.

Note that members must have “experience or expertise” related to “supporting” students who embrace “trans”-cultism. The word “supporting” has nothing to do with assisting students in ways that move them toward accepting their immutable biological sex. It means facilitating their reality-denying feelings, their invasion of the privacy of their peers, their tyrannical linguistic demands of others, and the hijacking of hard-won girls’ athletic opportunities by objectively male students.

Any guesses which community-based organizations Pritzker will include? Could it be the Illinois Safe Schools Alliance? Equality Illinois? The Center on Halsted?

Biss’ guests were the following:

Nat Duran, a young woman who pretends to be a man and works for the  “LGBTQ”-indoctrinating organization the Illinois Safe Schools Alliance.

Nicki Bazer, an attorney “who represents school districts in her day job, and also does pro bono work on behalf of transgender youth.”

Juliet Berger-White, Deputy General Counsel in the Office of the Governor and another activist for all things “trans”—particularly school issues—who helped craft Pritzker’s executive order.

Nat Duran exposed the lie that “gender identity” is fixed and immutable—a lie that some “trans” ideologues have tried to pass off to a gullible public:

[W]hen folks often think of trans and gender expansive young folks in school systems, they immediately go to restroom and locker room usage, right? Anyone who’s been in a public space and used these facilities know that they are really gendered, and so how do we make sure that students who maybe are exploring different aspects of their identity are able to use these spaces in a way that feels safe and supportive to them…. [E]specially as you think of younger grades, I think especially around middle school, students who are really just figuring out a lot of things about their lives, like allowing room for fluidity as well. I think sometimes… even if a school in the best of intentions enforces a really supportive practice, is it so rigid that it doesn’t allow for a student who’s like, “Well, I think I might be trans, or maybe I’m non binary, but I’m still figuring it out, and so I don’t know what restroom feels best to me right now.

And if, as “trans”-cultists assert, it’s impossible to know the authentic “gender identity” of a person by their clothing, hairstyles, or anatomy, “trans”-identifying students can’t possibly know whether their same-sex peers are male or female. Therefore, they shouldn’t care where they change their clothes or shower. Imagine a boy who identifies as a girl filing an expensive lawsuit to access the girls’ locker room only to discover all the girls identify as boys.

Oh, what a tangled web we weave when first we practise to deceive—particularly when we do it based on an incoherent ideology.

Duran’s discussion of identity exploration and fluidity points to the end goal of the “trans” revolution. The end goal is the eradication of public recognition of sex differences everywhere. Identity exploration, gender expansiveness, and gender fluidity preclude the existence of anything other than the wholesale sexual integration of every space, activity, and context. No more sex-segregated anything for anyone. Even school practices that are “really supportive” of opposite-sex-identifying students is insufficient. Duran and most other “trans” activists seek locker room and restroom free-for-alls—literally, restrooms and locker rooms Free. For. All.

It is critically important to understand that if society is legally prohibited from “discriminating” based on both sex and “gender identity,” there remains no legal way to prohibit what leftists call “cisgender” persons (i.e., persons who accept their sex) from using opposite sex private spaces. If a public school allows biological male Bob who pretends to be Mary to use the girls’ locker room, there would be no way to prevent biological male Tom who accepts his sex from using it. The school couldn’t prevent him from using it based on his sex because they’ve already allowed another male access to it. And they couldn’t prevent Tom from using it based on his “cisgender” identity, because they can’t discriminate based on “gender identity.” Abracadabra, all private spaces become co-ed.

Duran’s discussion also reveals how young the children are whom cultural regressives seek to inculcate with the “trans” ideology.

Duran also longs for government schools to be complicit in concealing information from parents about their own children:

[H]ow do we think through parental communications? If I’m calling home to talk to a parent, [is the student] out, or safe and supported, at home? Am I going to be using a different name or set of pronouns when I do that?”

In the view of “trans” dogmatists, those parents who reject the unproven, arguable, doctrinaire assumptions of the “trans” cult are unsafe and unsupportive and, therefore, deserve to lose parental rights.

[T]he rights of transgender, gender expansive, non-binary students are already protected in Illinois…. [U]nder the Illinois school code, all students have a right to equal opportunity to all educational programs and services. And under the regulations that the state board of education has issued, they have defined that, and made clear that you cannot discriminate or exclude or segregate students based on their gender identity. [T]hat applies to all schools within Illinois that are public schools. The Illinois human rights act also touches all non-sectarian K12 schools, or pre-K12 schools, and that also prohibits discrimination in all schools on the basis of sex and sexual orientation. And under the Illinois Human Rights Act, sexual orientation, sex, is defined as including gender identity.

Interestingly, Bazer did not share these relevant words from the Illinois Human Rights Act, which is state law:

The Act permits schools to maintain single-sex facilities that are distinctly private in nature, e.g., restrooms and locker rooms.

Nor did she share this from the 2016 Transgender Students in School  guidelines posted by the Illinois Association of School Boards:

[F]ederal courts in non-school cases have recognized a fundamental right to privacy or acknowledged the legitimacy of safety concerns in cases involving individuals undressing, using the restroom, or showering in an area to which a member of the opposite birth sex has access. Moreover, a federal district court recently asked the question whether a university engages in unlawful discrimination in violation of Title IX or the Constitution when it prohibits a transgender male student from using restrooms and locker rooms designated for men on campus. The court concluded: “The simple answer is no.”

The goal of the executive order is to ensure that we are bringing together a crucial group of stakeholders who have great experience on the ground…. These stakeholders have been doing this work on an ongoing basis, but the benefit of doing it from the perspective of a governor-appointed task force is that it can help these private stakeholders collaborate with the government, and the Illinois State Board of Education, to figure out what next steps should be, and what that looks like.”

In other words, outside “progressive” activists are going to collude with the government to advance their sexuality dogma. Who are these “crucial stakeholders”? Are any lesbians who object to the sexual integration of women’s private spaces included? Will the task force include members of the professional mental health and medical communities who in increasing numbers are concerned about “adolescent-onset gender dysphoria,” the effects of puberty blockers like Lupron, and how social “transitioning” at young ages may effect brain development? What about Muslims, Orthodox Jews, or theologically orthodox Christians who are taxpayers and have children in public schools? Are parents and students who object to the sexual integration of private spaces and athletics crucial stakeholders?

The name Berger-White may sound familiar to long-time IFI readers. Her husband, Jeff Berger-White, is a former colleague of mine from the years I worked full-time in Deerfield High School’s writing center on Chicago’s North Shore. He was at the center of a huge community controversy over his decision to teach the egregiously obscene play Angels in America: A Gay Fantasia on National Themes.

The play revolves around two couples: married Mormon couple Harper and Joe whose marriage is disintegrating in large measure due to Joe’s repressed homosexuality, which he eventually acts upon; and a homosexual couple, Louis and Prior. Louis leaves Prior when he finds out Prior has AIDS, and then has a month-long affair with Harper’s husband Joe.

In the heat of the controversy, Mr. Berger-White sent a letter to our local press asserting that it is the responsibility of English teachers to “challenge the emotions and morals” of their students—a belief clearly shared by his wife. His assertion raises some questions:

In the Biss interview, Juliet Berger-White asserted that “the law sets the floor,” but that when it comes to government schools affirming “trans” dogma, “there’s no ceiling.” Echoing her husband’s sentiments, she acknowledges the moral implications of promoting the “trans” ideology and policies in government schools, arguing that taxpayer-funded schools should abandon respect for biological sex “not just because we’re legally obligated to do so, but because we’re morally obligated to do so.”

The presumptuous Berger-Whites are using their taxpayer-funded jobs to indoctrinate other people’s children with their sexuality ideology. Their views are premised on arguable assumptions that are rarely addressed and never proved. Neither compassion nor “inclusivity” requires the affirmation of arguable assumptions that deny reality or that deem subjective feelings of greater importance than biological reality, especially if those assumptions result in the sexual integration of private spaces and speech mandates.

Conservatives, teach your children well, which can’t be done in places where foolish adults don’t respect physical embodiment as male or female or by cowardly adults who passively acquiesce because they care more about themselves than the children who have been entrusted to them.