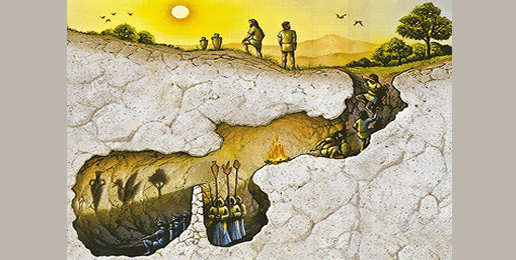 Inclusive Curriculum Bill and the Church of Secularism
Written By   |   04.02.18
PRINT

I object to two legislative attempts to impose the Secular Religion upon citizens of Illinois: SB 3249 and HB 5596.  They are wholly unnecessary as LGBTQ icons and their works are already present in government schools.

My objections concern the establishment of secularism as our national religion, the valorization of LGBTQ icons more for their sexuality than their gifts and accomplishments, and using the legislature of Illinois as a social engineering lab.

In this my 65th year, our society is nuts.  Rather than being led forth into light and away from ignorance, children are being herded by teachers (and politicians) into Plato’s cave, where the darkness of identity politics, victimhood, and androgyny flicker on the walls.

What was called religion is now marginalized and silenced, and the new dogmatists have a Great Awakening going on.  Secular religion is being established, and SB 3249 and HB 5596 will further that end.

In scholar Mary Eberstadt‘s meaty essay “The Zealous Faith of Secularism,” secular religion has all but replaced the faith that once filled the now nearly-empty church pews. This new religion is a faith free of certainties—a religion that allows one to have his cake and eat his neighbors’ too. Eberstadt writes that “This substitute religion pantomimes Christianity itself in fascinating ways. It offers a hagiography of secular saints, all patrons of the sexual revolution.”

Is that not who faithful Secularists want enshrined in public schools through the “Inclusive Curriculum” bill?

People of faith tend to hunker down under a continual bombardment of political sociology experiments and the attendant media assaults on objections to legislation like Illinois SB 3249 and HB 5596, which demands an “Inclusive Curriculum” that “requires that all social studies and history classes in grades k-12 include the “role and contributions of… lesbian, gay, bisexual, and transgender Americans.” School children should be taught that all people bring gifts that delight, inform, and/or provide positive paths to citizenship, and Walt Whitman, Carson McCullers and James Baldwin do that very well in our curriculum already. Explicit identification of their sexual proclivities does nothing other than advance the sexuality doctrine of the Church of Secularism. Object to this sacred dogma and be damned by the later day Lollards of secular religion.

Tell me, who will your children be after 13 years in the Church of Secularism?