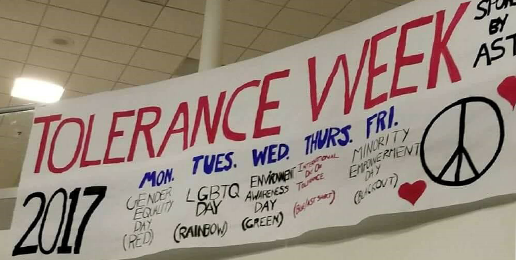 Solecism: a grammatical mistake in speech or writing

On March 9, 2017, the Illinois Association of School Boards issued an update to a 2016 guide titled “Transgender Students in Schools Frequently Asked Questions for Public School Boards and Staff,” which is a publication of the National Association of School Boards (NASB). Since so much of what goes in our government schools is barely visible through the noxious bureaucratic fog that envelops them, conservative parents and teachers should peruse this document to get a clearer picture of where the “trans” cult and its sycophants are shoving us.

Let’s take a quick look at just three of the questions, all dealing with pronoun mandates:

Question: If a school administrator has advised school staff that a transgender student wants to be addressed by that student’s preferred name or pronoun, can a school staff member refuse to do so?

Under most circumstances, a school staff member should abide by the parent’s/student’s wishes as to how to address the transgender student. In accepting employment with a school district, administrators and school staff agree to abide by, uphold, and enforce all of their school board’s policies and procedures, as well as federal and state laws, including a wide variety of non-discrimination, harassment, and bullying policies and procedures. Complying with the school administrator’s directive and abiding by the school district’s anti-discrimination policies and procedures likely will not interfere with an employee’s personally held beliefs. Moreover, consistent with the school board’s mission, an employee’s religious or other sincerely held beliefs should not prevent that employee from treating all students with respect and dignity.

To be clear, according to the NSBA (and IASB) all staff members should use incorrect pronouns or newly invented words when referring to  students who masquerade as the opposite sex, or those who “identify” as both male and female (e.g., “pangender,” “bigender,” or “genderfluid”), or those who claim to be “genderless” (e.g., “agender”). Maybe the NSBA will next direct teachers to ask  daily how their “gender fluid” students wish to be addressed.

There are no laws in Illinois that require teachers to use incorrect pronouns for students who have decided that pronouns have no connection to their sex. There are no federal laws that require such a bizarre practice. And yet, school administrators are issuing pronoun diktats to their staff without notifying the public and despite never having created policy mandating the use of solecisms.

How can the NASB possibly know that mandating lying does not “interfere with,” for example, a theologically orthodox Christian “employee’s personally held beliefs”? And what does a willingness to lie say about staff members? What does a teacher’s willingness to lie about biological sex teach students?

“Progressives” seem to believe they have a unilateral right to control language. They establish Orwellian language rules, changing grammar and redefining terms like “safety,” “hate,” and “tolerance.” And now they’re trying to circumscribe what respect and dignity entail. Don’t be bullied. No one has an obligation to defer to Leftist Newspeak. For many people of faith, treating others with respect and dignity includes respect for the truth and meaning of their physical embodiment as male or female. To deny the truth that they are created in the image of God—male or female—is to disrespect them. To facilitate, affirm, or appear to affirm a lie as true is an act of profound disrespect.

Question: Can an employee be disciplined for insubordination for failure to comply with an administrator’s directives, or the student’s or parent’s expressed name and pronoun preferences?

A school district could pursue disciplinary action against the offending employee for insubordination for failing to comply with the administrator’s directives and/or the student’s/ parent’s wishes…. Where the employee has refused to comply based on her genuine belief that the directive is contrary to her religious convictions, she may claim that the district has violated her First Amendment rights by disciplining her. Whether that claim would be successful in federal court is unclear…. If the employee not only refuses to comply with the directive, but also allows other students to disregard the student’s name and pronoun preference, which creates a harassing or hostile environment for the transgender student, the school board also could pursue disciplinary action against the offending employee for allowing student-on-student harassment.

Pronouns denote and correspond to objective biological sex. Referring to objectively male students by female pronouns is a lie and disrespects something real and profoundly meaningful about them: their physical embodiment. To the government, a refusal to lie is an act of insubordination for which an employee could be disciplined.

Worse still, it appears that administrators may order teachers to require their students to lie as well. How can any serious Christ-follower be part of such malfeasance and ontological treachery?

Question: How should schools handle objections by non-transgender students or families to sharing locker rooms or restrooms?

Ensure that your schools are places where all students are made to feel welcome, respected, and protected. While remaining sensitive to the rights of all students, a practical way of addressing these concerns is to make spaces available for any student who does not want to share locker rooms or restrooms with other students. Such options can include privacy curtains in locker rooms and separate restrooms. Keep in mind, however, that OCR takes a strong stance on this issue. In at least one recent case, OCR indicated the use of such separate facilities must be voluntary, and contrary policies could result in enforcement action.

To the relief of many conservatives, on February 22, 2017, the Department of Education’s Office for Civil Rights (OCR) sent a “Dear Colleague” letter to all public schools informing them that the OCR has “decided to withdraw and rescind” the “policy and guidance” issued by the OCR under President Obama, which commanded schools to sexually integrate restrooms, locker rooms, and even hotel accommodations for school-sponsored overnight events. The relief of conservatives may have been premature because on June 6, 2017, the OCR sent out further clarifications that included this:

OCR may assert subject matter jurisdiction over and open for investigation the following allegations…:

There are several reasons why the incoherent, deceitful, anti-science “trans” ideology is transforming the country at breakneck speed, two of which  are the ignorance and cowardice of conservatives. Conservatives need to learn about this ideology and resolutely resist the efforts of “trans” cultists to control language and sexually integrate private spaces. Church leaders need to teach about the “trans” ideology. Church leaders need to help their congregations understand the biblical view of maleness and femaleness, and they need to help them understand the fallacious propositions that comprise the “trans” ideology. Conservatives need to expect far more knowledge, wisdom and courage from political and school leaders. And finally, conservatives should think deeply about whether it’s wise and good to have their children trained up by those who don’t understand that the body and soul constitute an inseparable unity.