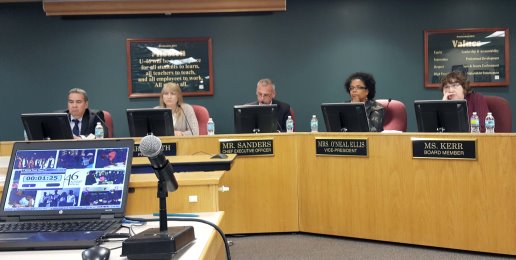 A second article was needed to address adequately the problems exposed in Monday’s school board meeting in Illinois School District U-46 in which the decision to allow a middle school gender-dysphoric student to use an opposite-sex locker room and the decision of school CEO Tony Sanders’ to conceal that information from parents were debated.

It is important for taxpayers in every community to pay close attention to what is being done and said by leaders in U-46, because the serious issues regarding modesty, privacy, the meaning of biological sex, parental rights, and gender dysphoria will confront every community. And the arrogance, ignorance, and hypocrisy of “progressives” who are driving this destructive assault on truth and reality will need to be identified and boldly confronted.

Board member Traci O’Neal Ellis inadvertently let the cat out of the bag “progressives” furtively carry about and use to humiliate conservatives into silence and submission. But first some background is in order.

Any conservative who opposes the inclusion of “sexual orientation” (code word for homosexuality) or “gender identity” in anti-discrimination policies is routinely called hateful and falsely accused of either not caring about the bullying of homosexual and gender-dysphoric students or of actively supporting such bullying. School board member Jeanette Ward has been on the receiving end of such malignant and false accusations.

It is not a desire to harm students that leads conservatives to oppose the inclusion of conditions constituted by subjective feelings and volitional acts (as opposed to objective, non-behavioral conditions like race, sex, and national origin) in anti-discrimination policies. All decent people—and yes, the vast majority of conservative people are decent—oppose bullying of any person for any reason.

Rather, the reasons conservatives oppose the inclusion of these conditions in anti-discrimination policies are these:

1.)  It opens the door for other conditions similarly constituted to be added to anti-discrimination policies.

2.)  It inevitably leads to the erosion of religious liberty, as we are currently witnessing.

3.)  Such policies are later exploited for purposes perhaps intended but never mentioned. In other words, “progressives” use the old bait and switch stratagem, knowing that gullible or gutless conservatives will fall for it.

So, back to Ellis’ revelatory comments.

She referred to the district’s “existing anti-discrimination policy,” that she said “has not changed.” Well, she means it hasn’t changed since 2013 when it changed.

Ellis implied without stating that the non-changing, existing policy mandates that gender-dysphoric boys be allowed in girls’ locker rooms and vice versa. Is that how the addition of the term “gender identity” to school anti-discrimination policies is ever explained, promoted, or justified to community members?

In 2013 U-46’s School Board—which had exactly zero conservative representation—added “gender identity” to its anti-discrimination policy at the recommendation of school attorney Miguel Rodriguez. I can’t find in board minutes an account of the discussion that took place prior to the vote, so I wonder what arguments were put forth to defend the addition. Did school board members inform parents that this policy change was needed in order to ensure that gender-dysphoric boys would be allowed in the girls’ restrooms and locker rooms? Or was it promoted as an effective tool for curbing bullying? Did community members assume the policy change was made in order to prevent harassment and abuse only to see it now used to justify co-ed locker rooms?

Ironically, the footnotes in the board documents recommending the change—a change that Ellis now suggests  requires sex-integrated locker rooms—cites the Illinois Human Rights Act which states the exact opposite: “The Act permits schools to maintain single-sex facilities that are distinctly private in nature, e.g., restrooms and locker rooms.”

It’s important to note that the policy that was changed applies only to “educational and extracurricular opportunities”—not to bathroom and locker room usage. In addition, Title IX of the Education Amendments of 1972 specifically states that schools may maintain sex-separated locker rooms and restrooms.

Ellis, the school board member who suggested that those who oppose co-ed locker rooms are exercising “authority without wisdom” and are “bruising” children, is the same board member who referred to the Republican National Convention as the “Klanvention” on her Facebook page.  Enquiring minds want to know if such a slur might erode the trust conservative community members have in her ability to honor her oath to “represent all school district constituents honestly and equally”?

Ellis concluded her school board statement Monday night with these hollow words:

And to our students, I offer this to you. If you are straight, bisexual, gay, lesbian, transgender, gender non-conforming, queer, questioning, white, black, Latino, Asian, Native American, bi-racial, or any other racial, ethnic or national origin…if you score a perfect score on the SAT and are headed to Harvard, or you graduate dead last in your class, if you are able-bodied, or disabled, if you are low income or the child of the most affluent family in this district; if you have one, two, or no parents, if you are Christian, Jewish, Muslim, Scientologist, atheist, agnostic or of any other belief…however you show up in U-46, when you cross the threshold of a U-46 school, I welcome you. You are not “less than”. And because you are welcome here, that means that as a district, we have to work to meet your unique needs and well-being, while balancing others’ needs and well-being. In other words, we must exercise our authority with wisdom, in order to polish, not bruise you.

I wonder if Republican students who may have Republican parents believe those words.

Although Bartlett High School English teacher Gary Lorber’s macro-aggressive conduct at the board meeting may have been unusual conduct for a teacher, his views are widely held by “progressive” teachers in government schools who self-righteously view themselves as “agents of change” and have assigned themselves the duty of shaping the moral and political views of other people’s children. In my experience, this kind of arrogant teacher is over-represented in English departments. They, like many on the U-46 school board, want government schools to have no conservative representation in leadership or teaching positions. One conservative member on a board of seven is one too many for the disciples of diversity.

Lorber’s intemperate treatment of Mrs. Ward, especially his maudlin concluding insult was both unprofessional and cruel. I hope you can find three minutes to watch this video of Lorber’s performance, but in case you can’t, here’s a bit of what he said to his board member, Mrs. Ward:

I have never seen a teacher so brazenly and perniciously attack his own school board member. If a conservative had said anything approaching this, he or she would be vilified as a hateful bully. No child of mine would ever sit in a classroom under the tutelage of a teacher so devoid of tolerance, respect, decorum, civility, and humility.

U-46 board policies state the following: “All District employees are expected to maintain high standards in their school relationships, to demonstrate integrity and honesty, to be considerate and cooperative and to maintain professional relationships.” When the board and administration review Mr. Lorber’s statement, do they hear the voice of a considerate, cooperative, and professional staff member?

Two speakers at Monday’s meeting alluded to Mrs. Ward’s support coming from a hate group. Rich Jacobs, “husband” of homosexual activist and Kane County judge John Dalton, referred to “fringe political groups known for hate and divisiveness,” and board member Veronica Noland referred to a group labeled a “hate group” by the (ethically dubious) Southern Poverty Law Center. Because of my keen powers of deduction, I suspect the allusions were to the Illinois Family Institute, and, therefore, some context is warranted. And I know from assertions made by multiple board members that the board takes pride in listening and learning from diverse voices (after which some members hurl epithets).

Since the Left loves them some yum yum southern impoverished law center putrescent potage, below are five articles about the SPLC. The first three detail my experiences with the infamous Mark Potok and his laughably named “Intelligence Report.” They reveal how deceitful and hapless Potok is and how bogus is his “hate groups” list:

“When Will the Southern Poverty Law Center Stop Bullying?”

“The Morality Police at the Southern Poverty Law Center”

“The Church of Morris Dees” (originally published at Harper’s)

Most people are fully capable of deeply loving those who hold different beliefs and act in accordance with those beliefs. Most of us in this wildly diverse world do it every day. I wonder if these board and faculty members hurl the same ugly epithets at Muslim and Orthodox Jewish students and their parents who likely hold conservative views regarding co-ed restrooms and locker rooms?

Finally, I would argue that it is “progressives” who act and speak in destructive ways that foment hatred by relentlessly telling children and teens that those who believe that biological sex is profoundly meaningful hate those who reject their biological sex. That is a pernicious lie that undermines the possibility of dialogue with and relationships between people who hold different beliefs. Such a lie works against the purported goal of school boards everywhere to create and sustain diverse communities. By its nature, a diverse community will include those who hold diverse views, including on matters sexual. What “progressives” seek is a “diverse” community (and a “diverse” school board) in which everyone thinks just like them.

Treating unreality as reality harms the entire U-46 community and undermines the very essence of education.