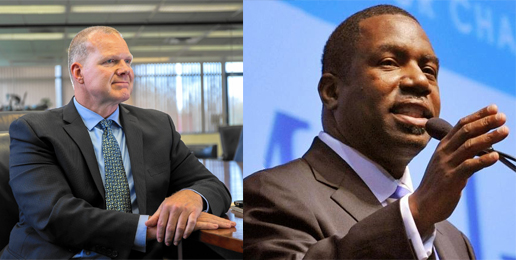 At the DNC Convention, Michelle Obama made this presumptuous statement:

[T]his election and every election is about who will have the power to shape our children for the next four or eight years of their lives.

Her husband’s non-legal attempt to do just that—to exploit his power to shape the lives of other people’s children—is no more evident than in his command to every government school to allow boys in girls’ locker rooms and restrooms and vice versa. His order, delivered via the Department of Education’s Office for (un)Civil Rights, commands schools to allow students who reject their sex to use opposite-sex restrooms and locker rooms and to do so based on nothing more than their claim that they feel like the opposite sex—or both sexes.

In order to attempt to undergird this diktat with a patina of legal authority, the Office for (un)Civil Rights falsely claims that when Title IX of the Education Amendments of 1972 prohibits discrimination based on “sex,” the word “sex” includes “gender identity.” If this redefinition of the word “sex” by unelected government bureaucrats prevails, schools will be prohibited from discriminating based on either sex or “gender identity” (i.e., subjective feelings about one’s objective, immutable sex) in even school facilities in which intimate, personal activities take place.

So, what will this mean? It means that eventually all restrooms, locker rooms, and showers will be co-ed. There will remain no way for schools to prevent non-“trans” students (i.e., normal students) from using opposite-sex locker rooms or showers. Schools will not be able to prohibit boys who accept their sex (i.e., normal boys) from using girls’ locker rooms based on the fact that they are objectively male because schools will have already have allowed other objectively male persons in girls’ locker rooms. And schools will not be able to prohibit normal boys (aka “cisgender” boys) from using girls’ locker rooms, showers, or restrooms because they are not “trans,” because that would constitute discrimination based on “gender identity.” The end game is the obliteration of all public recognition and accommodation of sex differences even in private areas.

If Obama’s pernicious goal is realized, people of faith will no longer be able to justify keeping their children in public schools. Parents cannot ethically place their children under the tutelage of teachers, administrators, and school board members so foolish that they don’t understand the meaning of biological sex and who will not protect the physical privacy of children and teens.

In the service of preventing this abuse of power and the destruction of respect for sex differences in our taxpayer-funded schools, IFI has sent this letter of warning, written by attorney Jason Craddock, to the Illinois State Board of Education Superintendent Dr. Tony Smith and Board Chairman Rev. James Meeks. 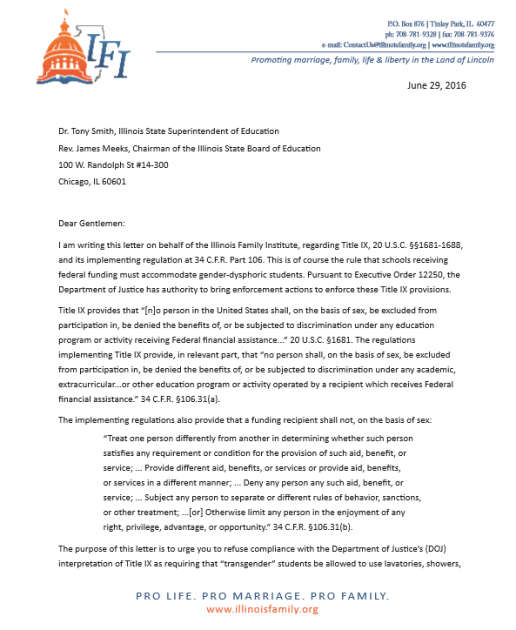 Take ACTION: Click HERE to send  Superintendent Smith and Board Chairman Meeks an email or fax asking them to please prohibit school administrators from implementing a policy that would permit gender-dysphoric students to use opposite-sex restrooms and/or locker rooms.

Let these school officials know that under no circumstance will your child be permitted to share a restroom or locker room with students of the opposite sex. Let them know that as a taxpayer, you are concerned about the modesty, privacy, and safety of students and about the liability of school districts for failing to protect students.