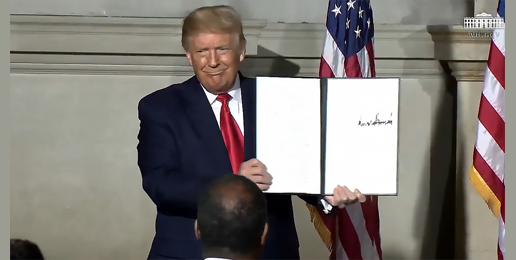 The 1776 Commission and the executive order signed by the president of the United States are the last things being discussed right now, and understandably so.  However, the 1776 Commission is more than what meets the eye.  The executive order is committed to restoring an education about the founding of our nation to the frontline of the information war: our nation’s schools.

The 1776 Commission is dedicated to increasing an accurate teaching and an emphasis on this teaching in America’s K–12 schools and throughout formal instruction.  The executive order also emphasis this education regarding the current statues and historical landmarks that currently exist, thereby providing protection of these monuments and statues that have previously been attacked and vandalized or taken down by radicals and politicians throughout America.  This has been a historic tactic by Marxists to remove America’s history in an effort to destroy the truth, while replacing this history with their own propagandized interpretation.

The 1776 Commission is also a full rebuke and a knockout punch to The 1619 Project and its mission to rewrite America’s history based on the lie that America is founded on racism, bigotry, and discrimination.  A simple reading of Thomas Jefferson’s own writings would clearly show that he, too, was interested in abolishing slavery, even as a young congressman in Virginia before the revolution.  In fact, it was placed to a vote because of his hard work on this issue.  The vote failed due to countless congressmen in Virginia being beholden to England.  It’s this accurate history that the 1619 Project sought to ignore while replacing it with their own false interpretation.  The 1776 Commission takes the 1619 Project head on, while also emphasizing the need to fully remove Common Core, which has been known to be the vector of such indoctrination and propaganda.

The Commission is to be made up of approximately no more that 20 people, including members of the president’s own Cabinet and non-administrative civilian members who are content experts and experts in the field of education.  These individuals are given two years to organize and report growth in the areas of education and exposure to America’s youths and protection of landmarks and state parks, veterans’ memorials, and other historic sites that are critical to the education of our youth to instill an accurate understanding of our nation’s history and the founding of America.  The 1776 Commission is also committed to grant funding for groups and educational institutions who show an increased interest in education America’s youths about the founding of American, its founders, its history, and the Revolutionary War and those who fought for our independence and allow us to be free.

The Commission has two years to produce results, and those results and accomplishments are to be reported by the secretary of education.  The Commission can continue beyond two years, based on a presidential order or recommendation.  However, this is where the bullet hits the bone.  If Common Core digs in, as it has in the past, by simply moving into and hiding within corporatized curricula that are commonly sold to and accepted by K–12 school districts, the propaganda and indoctrination will not go away.  The Commission cannot recommend that those who are in positions of influence (i.e., administrators, elementary teachers, history teachers, civics teachers, etc.) be replaced, as these decisions reside with the school districts themselves.

Effective educators have already been teaching an accurate history of our nation’s founding and the Revolutionary War, along with our founders.  So the 1776 Commission cannot remove destructive ideologies that exist within individuals who are hell-bent on indoctrinating America’s youths.  What the 1776 Commission does do, however, is stop groups and organizations such as the 1619 Project from entering government-funded K–12 schools, along with government-funded higher education institutions.  This is a good thing.  In fact, those institutions that allow these groups to enter and plant their seeds of propaganda will most likely be defunded by the federal government, but it will take a vigilant citizenry to pay attention and report any occurrences of infiltration.

The final part, and perhaps a more hidden positive aspect of the 1776 Commission and the signed executive order, is that it may give educators the right to refuse any professional development that seeks to disparage our nation’s history or indoctrinate or humiliate educators based on their race or ethnicity.  If educators are knowledgeable of these actions and movements in a positive direction, they could easily reference the 1776 Commission and the executive order as a possible defense as to why they are filing a complaint regarding unprofessional or insulting training that seeks to disparage their heritage or race.  However, this too is a slippery slope, and it’s up to the discretion of the individual educator to make such a decision because the executive order clearly states that the removal of an educator is up to the local district, not the federal government.

The 1776 Commission is a step in the right direction.  It stops radical Marxist organizations from infiltrating our schools in an organized fashion.  It incentivizes educators and K–12 school districts to teaching and seeking out a further education for America’s youths regarding our nation’s founding and those who fought for and worked toward our nation’s independence.  The 1776 Commission also seeks to halt the removal of historic sites, monuments, and statues that advance an accurate history of our nation’s founding and our nations conflicts, while preventing their removal or destruction, as these sites and monuments are deemed national educational sites to be referenced and learned from.

The 1776 Commission could stem the tide of the infiltration of Marxist ideologies that seek to disparage our nation’s founding and those who fought and died for our freedom.  Time will tell.

Dr. Sean M. Brooks is the author of six books, and the host of American Education FM Podcast. This article was originally published at Townhall.com.

Larry Burkett Was Right–About A Lot of Things