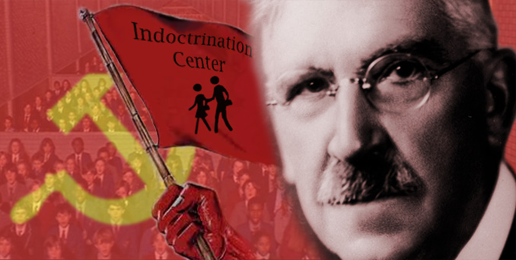 When humanist John Dewey and his disciples took over the emerging government-education system created decades earlier to advance collectivism, the fledgling system was still in its infancy.

By the time he died in 1952, though, it was a well-oiled collectivist machine that would obliterate America’s religious, intellectual, and political heritage more effectively than any force previously imaginable.

Dewey is often lauded as the founding father of the “progressive” education that now has more than 85 percent of American children in its grip. Although he wasn’t alone—he stood on the shoulders of fellow collectivists Robert Owen and Horace Mann—Dewey certainly deserves much of the credit, or blame, for unleashing it on the United States and humanity.

Like Mann and Owen before him, Dewey had ulterior motives when he dedicated himself with missionary zeal to the cause of “education reform.” Fortunately for future generations and historians, he was a prolific writer who cranked out a seemingly never-ending stream of essays, papers, manifestos, and articles. His views and objectives, then, are hardly a mystery.

Dewey wanted to fundamentally transform the United States. He wanted it to look more like the Soviet Union, in fact. To do that, he believed a total transformation of education and society was required—literally “changing the conception of what constitutes education,” as he wrote in “The Relation of Theory to Practice in Education” in 1904.

Education must bring about a “new social order,” he argued.

As was the case with virtually all of the key figures involved in the government takeover of education, Dewey rejected Christianity and even the very existence of God. More on his religion later. He also rejected the individualism and liberty that defined America up to that point, with its strong protections for God-given rights, private property, and free markets.

Instead, Dewey worked fiendishly to continue the severing of American and Western education’s Christian roots. The process was launched by Owen, the Welsh communist whose commune in Indiana failed. It formally took root under Mann in Massachusetts, when he imported the Owen-inspired Prussian model of education. But that was all to be just the beginning.

By the time Dewey and his disciples worked their magic, the scheme would culminate in a nation in which the overwhelming majority of high-school seniors violently reject the biblical worldview, and in which most young people describe themselves as socialist.

On top of that, the system would produce a nation in which less than a third of those same seniors would even be considered “proficient” in reading and math, according to federal data gathered from the National Assessment of Educational Progress.

Replacing Freedom With Collectivism via Education

Interestingly, Dewey was from Burlington, Vermont—socialist Bernie Sanders’s stomping grounds. And like Sanders, Dewey styled himself a “democratic” socialist. But many decades before Sanders visited the Soviet Union on his honeymoon while it was slaughtering and torturing dissidents, Dewey made a pilgrimage to Moscow under Bolshevik rule.

Of course, Karl Marx called for government control of education in “The Communist Manifesto,” and so the Soviets complied. Decades earlier, Owen, another communist, did the same. Dewey picked up where they left off, fervently advocating total control of all education by the state with even more passion than Sanders does today.

Writing in the far-left magazine New Republic, Dewey provided glowing reports about the communist system being imposed upon the people of the Soviet Union. He was especially pleased with its so-called education system, celebrating the way it was instilling a “collectivistic mentality” in Soviet children in his “Impressions of Soviet Russia and the Revolutionary World” published in 1929.

Despite his fondness for Soviet totalitarianism and the communist “ideology” behind it, Dewey would publicly criticize Stalin and Stalinism later in life. His model for a communist United States, by contrast, was outlined in Edward Bellamy’s 1888 book “Looking Backward,” a fantasy about a wonderful collectivist America in the year 2000 where all private property would be nationalized by government.

Dewey’s socialist views were hardly a secret. In “Liberalism and Social Action,” he wrote that the “only form of enduring social organization that is now possible is one in which the new forces of productivity are cooperatively controlled.” “Organized social planning,” he continued in his well-known 1935 work, “is now the sole method of social action by which liberalism can realize its professed aims.”

In common with virtually all the totalitarians of the 20th century, Dewey understood that the education of children would be fundamental to achieving his Utopian vision of collectivism. “Education is a regulation of the process of coming to share in the social consciousness,” he claimed. “The adjustment of individual activity on the basis of this social consciousness is the only sure method of social reconstruction.”

Out With 3 Rs, in With Collectivism

In his important 1898 essay “The Primary Education Fetich [sic],” Dewey argued strongly against the then-heavy emphasis on reading, writing, and arithmetic in the younger years. It produced highly literate, independent-minded individualists with faith in God and freedom. That was not conducive to a collectivist Utopia, obviously.

Instead, Dewey thought the main focus of education during those precious early years should be socialization and emphasizing collectivism. In particular, the reformer wanted to ditch reading and writing in the primary grades to concentrate on giving children “the habits of thought and action” that he believed were “required for effective participation in community life.”

An astute operator, Dewey recognized that the liberty-minded and overwhelmingly Christian teachers, taxpayers, and parents of America of that era would never knowingly support his radical educational and political ambitions if they understood them. “Change must come gradually,” he explained in that same essay. “To force it unduly would compromise its final success by favoring a violent reaction.”

So instead of going to the American people, Dewey went to the Rockefeller oil dynasty, which was giving away unfathomable amounts of money for “educational reform” through the “General Education Board.” The “philanthropic” outfit gave Dewey millions of dollars to create an experimental school to try out his ideas—a school that successfully cranked out reading-disabled collectivists.

In his crucial 1916 work “Democracy and Education,” Dewey argued that the education regime he envisioned would be “the process through which the needed transformation may be accomplished.” And so, he set about taking control of the education system.

Having failed as a primary- and secondary-school educator, Dewey’s effort to seize control of the school system began with a leadership position in education at the Rockefeller-funded University of Chicago. Later, he went to Columbia University’s Teachers College.

From his ivory-tower perch, Dewey would train up legions of teachers and disciples to unleash on an unsuspecting United States and carry forward his vision. It worked. Dewey became the founding father of America’s “progressive” public education system, and his ideology went mainstream.

Another Dewey “achievement” while in academia was resurrecting quack methods for teaching reading that had been discredited in the 1840s under Mann in Boston. That incredible saga—the root cause of America’s current illiteracy crisis—will be the subject of a future piece in this series.

Perhaps even more important and far-reaching than being able to advance his views on education and politics was Dewey’s influence on the religious views of Americans. Dewey was a self-proclaimed humanist, with his public declarations on religion fusing atheism with socialism and communism. His success on this front is unquestionable and will be the subject of an upcoming piece in this series as well.

In fairness to Dewey, Owen, Mann, and the lesser-known characters behind the government takeover of education, they didn’t have the 20th century in the rearview mirror. It might be said, in their defense, that they did not know the ideology of collectivism, when implemented, would lead to the untimely deaths and mass slaughter of hundreds of millions of people. Now, we should know better.