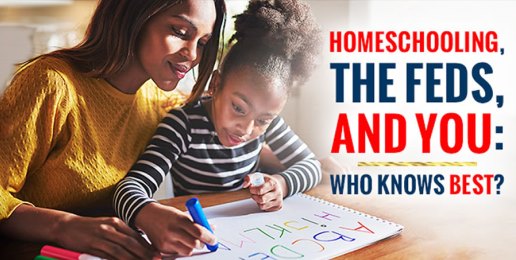 Recently, U.S. Secretary of Education John King, while speaking at a press conference, remarked that although some homeschool situations are just fine, in general, “Students who are homeschooled are not getting kind of the rapid instructional experience they would get in school.”

King also said that part of the school experience is learning how to deal with and build relationships with peers and teachers—implying that homeschoolers don’t get this kind of experience.

Now, before I go on, in the interest of full disclosure, I’ll tell you that my wife and I homeschool our three daughters. To be specific, we’re part of a community of homeschooling families with a hybrid model that shares resources and that journeys together. We think our daughters are receiving a first-rate education. I say that not just so you know I’ve got a horse in the race, but because my wife and I have personal experience. We know this world. We live in it.

But back to the Secretary’s comments. It’s not clear what he meant by “rapid instructional experience,” but that can mean a sort of checklist approach—plowing through the material, cramming for standardized tests, and hitting every mandated topic. In that sense, he’s right. Many homeschoolers don’t get “rapid instruction” of this sort, but that’s not really education in the first place.

But what has me most concerned about the Secretary’s remarks is the classic “we know better than you” attitude so endemic among governmental elites—whether it’s telling us what kind of healthcare we need, or how to teach our young ones about the most intimate of human relations.

Let me be clear: The federal government’s ever-growing reach into our children’s education is a bi-partisan effort. The Department of Education was established by Jimmy Carter. George W. Bush signed the disastrous “No Child Left Behind” initiative into law. And Common Core, which many argue will leave kids unprepared for college, has both Republican and Democratic support.

But if the federal government really does know best, how is it, as Lindsey Burke of The Daily Signal notes, that “just one-third of all eighth-graders in public schools can read proficiently”? How is it that “Roughly two out of 10 students don’t graduate high school at all, [and]the United States ranks in the middle of the pack on international assessments?”

And while we’re at it, can we address this idea that homeschooled children don’t socialize well? That’s just nonsense. Some struggle, of course, but so do some public schoolers. And what does it mean for a child to be normally socialized anyway? If it’s activities, homeschooling author Joe Kelly observed recently that “Many home-schoolers play on athletic teams…” And “they’re also interactive with students of different ages… [having] more opportunity to get out into the world and engage with adults and teens alike.”

Now, I’m not trying to hammer public education. I grew up in Northern Virginia, home of some of the finest public school systems in the country that turn out highly educated, well prepared young people. And Colorado Springs, where I live now, is full of great teachers, and innovative charter schools.

But none of that changes the statistics. According to the National Home Education Research Institute, homeschoolers typically “score 15 to 30 percentile points above public-school students on standardized academic achievement tests.” And they “score above average on achievement tests regardless of their parents’ level of formal education or their family’s household income.”

Homeschoolers are, according to U.S. News “ripe for college.” They receive an education tailored to their needs. And you know what? They’re well-socialized, too

Now am I saying you should homeschool your kids? Not necessarily. What I am saying is that you—not the Secretary of Education, the federal government, or anyone else—know what’s best for your children and your family.

We live in a nation where we are free to tailor our children’s education to their specific needs, whether that involves public, private, charter, or home schooling. Let’s be proactive in protecting and championing that freedom. For more information on homeschooling statistics, check out the links below.