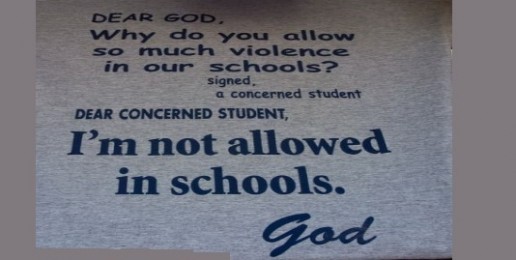 “God has become THE four-letter word in most public schools in the United States,” says Whitehead, founder of The Rutherford Institute. And he explains in a commentary why that has come to pass: “An elite segment of society that views God as irrelevant has come to predominate.” (View video commentary)

Whitehead gained his legal insights into the phenomenon through the many cases of religious discrimination that have crossed his desk.

“What’s happened is [that] the elitists — the people who run American society, from the public education system to certain governmental institutions and figures — have basically decided that God is irrelevant to public discussion,” says Whitehead during an interview with OneNewsNow.

“…This ignores the 120 million-plus people in America who take their religion seriously, [who] practice it, and who pay taxes to support institutions like the public schools.”

And what that does, adds Whitehead, is force those people — along with their religious rights and their free-speech rights — into “utter subservience” to all other beliefs.

The issue, according to the attorney, is not separation of church and state — an argument frequently cited by those who assume the secular viewpoint. “The issue in such instances is the religious believer versus the secular state,” he writes. “It is also a denial of everything this country stands for in terms of the freedoms of speech, religion, and a respect for moral tradition.”

Whitehead believes that what exists now in America is akin to the old Soviet Union and China, where it is religious believers fending off the state.