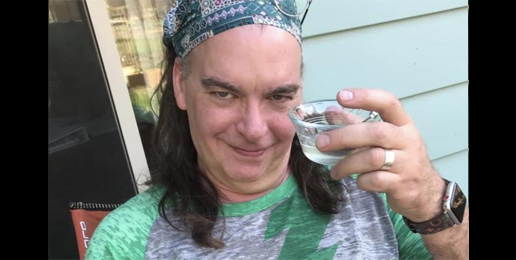 Mark Vincent Busenbark, a middle-aged man with a cross-dressing alter ego he calls Vica Steel, has been creating intellectual and moral havoc in Frank Allis Elementary School in Madison, Wisconsin for a year. Last school year, Busenbark, a science teacher, created a creepy video about his creepy predilection for cross-dressing and pretending to be sometimes a man and sometimes a woman. Then, with the permission of his administration, he presumptuously showed his creepy “coming out” video to all K-5 students without their parents’ knowledge or consent.

In this video, he describes in biased language his disordered and delusional view of his sex, asks to be referred to as Mx. Steel, asks that students refer to him by absurdly by the pronouns “they,” “them,” and  “theirs” (presumably to accommodate his imaginary alter ego), and then reads a picture book about a little girl who identifies as both female and male, which he tells the students is “just like” his story.

In this book, those who reject the “trans” ideology are depicted as an undifferentiated mass of specters with evil eyes who refuse to use the false pronouns of the little girl who grows up to be a “nonbinary” teacher.

Here’s part of what the cunning propagandist Busenbark, doing his best Mr. Rogers impersonation, said to all the K-5 students:

Hello. Let me introduce myself. You’ve known me as Mr. Busenbark or Mr. B. … There is one truth that I’ve hidden from you, [and] until about a month ago from my fellow teachers, from friends, [and] from family. I am transgender. Maybe you know what that means. Maybe you don’t. Maybe you’ve only heard those words through the filter of those who hate and fear. … When I was a child, I was named a boy, but that never felt right or true. … Can I tell you how terrifying it is coming out, being honest about a truth I’ve hidden for decades? The only words I knew for people like me when I was growing up were words of hate and words of fear. And those words are still out there. … I know that you will love and honor me as we move forward. And now let me introduce myself anew. … I am going to take my wife, Stella Steel’s, last name. And I am going to use—not Mr. and not Ms.—but Mx. So, you can call me Mx. Steel. … And for my pronouns, I’m using “they,” “them,” and “their.”

Busenbark is cunning in that, to other people’s young children, he suggests that at birth, children’s “identity” is “named,” whereas, in reality, their sex is acknowledged.

He’s cunning in that, to other people’s young children, he suggests without stating outright that those who reject the “trans” ideology and the cultural and interpersonal demands of “trans” cultists are hateful and fearful.

He’s cunning in that, to other people’s young children, he suggests that his feelings, desires, and beliefs constitute “truth.”

He’s cunning in that, to other people’s young children, he suggests that to love and honor him require that they affirm his disordered beliefs about biological sex and wicked efforts to masquerade as the sex he is not.

And he’s cunning and manipulative in that he tries to engender sympathy by telling other people’s young children that he is terrified to tell them he’s “trans.”

The complaints of angry parents who confronted the administration for its failure to notify parents or obtain permission for their children to view Busenbark’s “trans” propaganda fell on morally deaf ears, which evidently emboldened the already bold Busenbark further: This January, he started using the girls’ restrooms—again with no parental notification.

And again, parents found out and justifiably objected to a grown man sharing a restroom with little girls. The school then found itself embroiled in a public relations nightmare, so they did what “progressive” districts do when entangled in an imbroglio of their own making. They tried to spin the story by saying the problem was allowing an adult to share restrooms with children.

Anyone who works in a public school knows that teachers commonly share single-sex multi-occupancy restrooms with students because there are far more student restrooms than staff restrooms.

The problem in the Madison, Wisconsin elementary school is not that teachers are using the same restrooms as students. The problem is that a man was using a girls’ restroom.

Busenbark doesn’t belong in women’s staff restrooms either. Are adult women too spineless to say that? Are male faculty members and administrators too lacking in testosterone to defend the assaults on the honor and dignity of their colleagues by a cross-dressing man? Sheesh.

In an open letter published in an “LGBT” magazine in Madison, an unhinged Busenbark went off on his own district for trying to find a way to keep him out of little girls’ restrooms by making all staff stay out of all student restrooms. The district is trying to keep the “trans” cult off their backs by camouflaging the fact that they want the cross-dressing man out of the girls’ restrooms. Here’s part of what the mixed up, muddled up, shook up “Mx. Steel” wrote:

In the 23 years that I’ve been in the district, students and staff have always used the same multi-stall bathrooms in our schools. Does that shock you? Women using the same bathrooms as girls? Can I ask you to name any public space that segregates bathroom use by age? … In the 23 years I’ve been in the district, there has never been a complaint about women using the same bathrooms as their students. … Women have used that bathroom for decades. No complaints. I used it. I am an open and out transgender woman. I fought decades with the trauma that our society laid on me. But I stood up and I came out, and yes, I used the bathroom because, seriously, can you just let us pee! Within days a transphobic parent complained to the district and our leadership. … I, alone, of all our female staff, I was to change the bathroom I used.

Busenbark is right on one point and in addressing it, he has exposed the deceit of his district administrators. They don’t really care if adults share restrooms with students. That’s a smokescreen to stave off the wrath of the tolerant “trans” cult when they find out that a female-impersonating man is being excluded from the girls’ restrooms.

But on his central point, Busenbark is wrong. He is not a member of the female staff.

This foolish, mawkish, juvenile, and tendentious letter from the principal of the Frank Ellis Elementary School  illuminates just how lost today’s government school leaders are and why parents must find educational alternatives for their  children:

Public schools have the responsibility to teach students how to become caring, inclusive, welcoming members of our communities. … [W]e believe that teaching about gender diversity is essential to creating gender-inclusive schools free of bias and bullying.

We reject the exclusion of anyone’s known identity, as this is an act of discrimination. We will continue to support and affirm Vica’s identity. …

We believe every person should feel connected and respected for who they are and Vica is not excluded from this principle. Vica aka Mx Steel came out as their true self. Their courage has resulted in the strengthening of our community. We are all more beautiful because of Vica Steel’s inclusion in it.

Well, at least Cutler is semi-honest when she refers to “teaching” about “gender diversity,” which is euphemistic language for using government schools to impose a leftist sexuality ideology.

Neither love, acceptance, justice, honor, care, inclusivity, welcome, support, nor respect require humans to affirm every feeling, desire, belief, or act that other humans choose to place at the center of their identities.

Enquiring minds want to know, when Busenbark intrudes into the private spaces of girls who, along with their parents, believe it’s wrong for girls to share private spaces with persons of the opposite sex, is he showing them love? Is he honoring them?