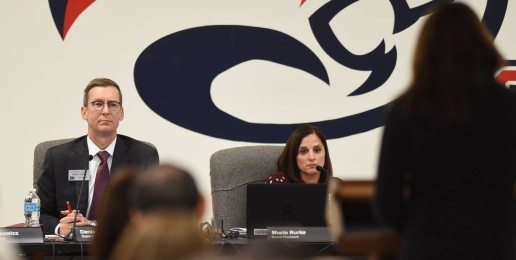 Perhaps I owe an apology to District 211.

While District 211 is guilty of egregiously poor judgment in allowing gender-dysphoric students to use opposite-sex restrooms and in agreeing to allow a gender-dysphoric boy into the girls’ locker room to use private changing areas, perhaps the district was neither incompetent nor dishonest with regard to the statements they made about the agreement with the Office for Civil Rights (OCR). Perhaps it is the ACLU and the OCR that are incompetent, dishonest, or both. Untangling who’s inept or lying may require Solomonic discernment. All that’s certain at this point is that there’s a tempest raging between District 211 and the devilish OCR.

Superintendent Daniel Cates has issued an angry statement in which he accuses the OCR of negotiating in bad faith and of inaccurately portraying the requirements of the agreement. Further, he demanded a full public retraction, which the OCR has thus far refused to issue. Therefore, Cates has called for an emergency board meeting on Monday night to decide whether the district will pull out of the proposed agreement.

We also remain disturbed by the inaccurate, misleading and fundamentally troubling language used by the District, even as they adopt this agreement. For example, the District said last night that transgender students who are provided access to locker rooms consistent with their gender identity “will utilize a private changing station when changing clothes or showering” and will not be allowed unrestricted access to the locker room. This is not what the agreement with OCR provides. The agreement specifically says that “based on Student A’s representation that she will change in private changing stations in the girls’ locker rooms, the District agrees to provide Student A access to locker room facilities designated for female students at school.” Nowhere does the agreement require Student A to use a private area to dress and such a requirement would be blatantly discriminatory. [emphasis added]

Superintendent Cates issued this blistering response on the district website:

On the heels of what was an appropriate and balanced approach to resolving an important issue of access to our locker rooms by one transgender student, we are outraged by the mischaracterizations in the press by Catherine Lhamon of the Office for Civil Rights (OCR), and her blatant disregard for the facts of the negotiated agreement.

The OCR appears to be stating to the media what they wish was in the agreement, rather than what was actually agreed upon by both OCR and the District 211 Board of Education – and this, after countless hours of listening, reviewing and careful consideration.

It is wrong, it is an act of bad faith, and our school district will not let it stand.

To be clear, what was agreed upon between District 211 and the OCR struck a critical balance for safeguarding the privacy of all students, recognizing the dignity of all students, and allowing all students to participate fully in our education programs.

The resolution agreement’s provisions on locker room access, approved by our School Board just 36 hours ago, apply ONLY to the student who lodged the complaint. It does not apply district-wide, nor set precedent for other school districts in the country. It gives this student access to the gender-identified locker room with this student’s stated assurance that privacy curtains will be used. And, if this student doesn’t comply, access will no longer be allowed. The agreement also removes the threat of the loss of federal funds and states that no violation of Title IX or discrimination by the District has occurred.

We communicated to the OCR that we expected a full retraction of their inaccurate portrayal of the agreement in the media. They refused. Failing that, we will convene an emergency board meeting to discuss taking action, including retraction of the agreement because the OCR acted in bad faith. Citizens have a right to expect more from a federal agency than smoke and mirrors.

The date, time, and location for the emergency Board of Education meeting will be posted on the District 211 website once it is established.

It is farcical to claim that allowing a boy in the girls’ locker room even to change in “private changing areas” is “appropriate” or “balanced,” but we have to give credit where credit is due: Steadfastly refusing to allow an objectively male student unfettered access to the girls’ locker room is a very good decision on the part of District 211.

All concerned community members should make it a priority to attend the Monday school board meeting and express their view that no students should be permitted access to opposite-sex restrooms or locker rooms. Restrooms and locker rooms should correspond to objective, scientifically-verifiable sex—not subjective feelings about sex.