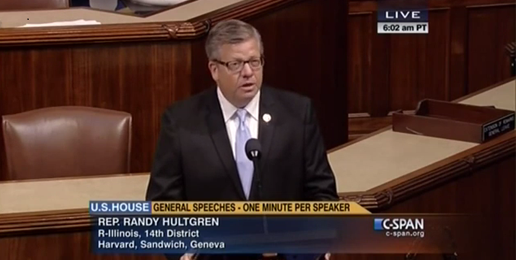 Have you ever heard of the “Values Action Team,” which is a subgroup of the U.S. House GOP Republican Study Committee? Somehow in all my years of paying attention (including working a stint on Capitol Hill for a member of Congress), it escaped my notice.

Here is how the subgroup has been described:

According to the RSC document describing its Values Action Team, “The goal of this group was to unite conservative Members with pro-family coalitions by establishing legislative goals, identifying key tasks for Members and coalitions to perform, and executing action items that would lead to conservative victories.”

Here’s the opening paragraph of a new press release:

Washington, DC — U.S. Representative Randy Hultgren (R-IL-14), Co-Chairman of the Values Action Team, today introduced the Parental Rights Amendment, H.J.Res. 121, to protect the rights of parents to raise, care for and guide their children without undue government interference unless there is proof of abuse or neglect.

It is difficult to image a better first impression made by a Congressional “subgroup” than the introduction of the Parental Rights Amendment.

For too long, local school districts thought they owned America’s children. It is past time for that to end. “Owned?” Yes, a family moves inside the boundaries of a district and the children are now subjected to the supervision of that governmental unit.

For decades, parents have had to check in with the government if they were planning to send their children to a private school or homeschool their children. Imagine what the Founding Fathers would say to that.

And it’s not just public education, but the government’s role in overseeing health care for minors.

“The freedom for parents to direct the upbringing, education and care of their children is an American tradition once established beyond debate,” said Rep. Hultgren. “Yet every day, families are broken apart by state actors who presume they are able to make a better decision for a child than a parent can. With recent state laws and court decisions threatening this American value, it is time parental rights are enshrined as fundamental rights and therefore protected under the Constitution.”

Here is the “Background” section in the news release:

Parental rights are not explicitly granted in the Constitution, which has resulted in an ever-growing number of conflicts with local, state and federal governments, and courts, seeking to intervene in parental decisions without a substantive justification or semblance of a showing of harm. That debate was reopened in 2000 when a Washington state law provided the authority for a third party to override a good parent’s decision regarding their children if it would be in the “best” interest of the children to do so.

Today numerous lower federal courts refuse to treat parental rights as deserving of protection as a fundamental right, and 35 states include disability as grounds for termination of parental rights.

And they provide a few examples:

Here is what the Parental Rights Amendment does:

It is revealing that a Constitutional Amendment is called for. As with so many other moral issues, earlier generations operated by common sense. As common sense and common law became over-shadowed by countless statutes, big government was able to advance its agenda of making Americans its subjects, rather than their master.

On this topic, I would recommend a brilliant article by professor Anthony Esolen titled “Peonage for the Twenty-First Century.” That is peonage as in peon, little people dwarfed by the big people running the government. Excerpts of the article can be found here.