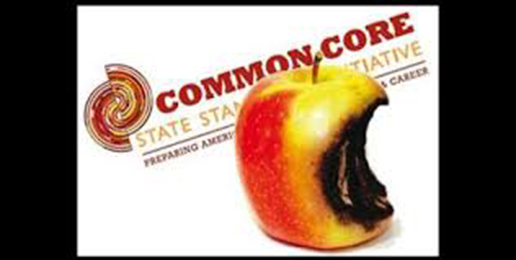 Education in America was originally the province of parents and churches. “Homeschooling” was the norm from colonial times through the mid-1800’s, and a classic education was the model.

Classical education consisted of the three stages of learning:

As noted at Classical Conversations: “This is the classical model of education that was used by the great thinkers and leaders of the past, including Aristotle, Plato, C.S. Lewis, and Thomas Jefferson.”

What is stunning is to consider that America’s founders and early settlers often had superior knowledge of the world, languages, and sciences without computers or a Department of Education!

Until approximately 1940, the schools in America adhered to the classic education model, preparing students for college with “classical curriculum [which] included Latin, possibly Greek, often French or German, English, history, mathematics, and some science.”

People may scoff at someone such as my grandmother who only had an eighth grade education. Yet Grandma had had Latin, Algebra, extensive English grammar, and even some Calculus in those eight years. She had a work ethic and, with the help of her husband, my Grandpa Ole, bought and managed businesses and real estate and achieved, to a modest degree, “the American Dream.”

Following 1940, and after World War II, there was a demand for more workers in trades, and fewer students had the money or ability to go on to college. So American education took a turn away from solely classical education, to also providing vocational education, allowing young people to learn a trade, enter apprenticeship programs, and join the ranks of tradesmen and factory production.

But somewhere along the way, the Progressive (think socialist) principles of John Dewey, germinating since the 1920’s, began to take hold. Dewey, like President Wilson, and like modern day Progressives, believed that, rather than giving students facts and the eventual ability to reason and argue, that people should be led by experts. That young people should be molded in such a way that they would acquiesce to suggestions and mandates by the enlightened elitists.

Faith and the Bible had been a foundation of education in America. Noah Webster wrote often on the subject and claimed:

Unfortunately, the Left has continued a quiet, but relentless war on that foundation, often aided by SCOTUS opinions and rulings. The U.S. Supreme Court ruled in Abington Township School District v. Schempp — decided on June 17, 1963 — “prohibiting school officials from organizing or leading prayers and devotional Bible reading in public schools.”

Though Schempp did not outlaw prayer and Bible reading in schools, but prohibited teachers from leading Bible study or prayer, the 60’s radicals (the latest permutation of Dewey and Wilson’s Progressives) took advantage and schools took a left turn. Gone was the classical education and in its place came a host of programs — sex ed, new math, whole language learning, and revisionist history.

What was the subtle, though potent, effect of all this “new curriculum?” Students were weaned from a reliance on parents and faith standards, from facts and reasoning, and pointed toward reliance on the “enlightened experts.” A new generation of students were raised up to question authority (at least their parents’ and grandparents’ authority) and blindly follow their teachers and profs.

Also, during this time the Federal government began to be more involved in education:

By 1965, the federal government, through the Elementary and Secondary Education Act (ESEA), expanded its involvement beyond areas with explicit defense connections. Importantly, the government did not mention increased federal control over education; rather, funding was the primary justification for this expansion

In 1979, the Department of Education was created, largely at the behest at the National Education Association (NEA). The NEA was, at this point, a new teacher’s union (albeit a very large teacher’s union). When Jimmy Carter was elected President, power over education became further concentrated in Washington.

Jump ahead to 2009, with Obama promising to fundamentally transform America. And one area of transformation was education. The Obama administration proposed criteria to evaluate every state’s education system, and the only way to standardize the education was through Common Core.

What in the world is “Common Core?”

That’s hard to pin down because it can be a different set of standards in different states. Some of the standards are terrible, some not so much.

But the REAL, issue with Common Core? Federalization of education. As written at Heritage:

Why is Common Core problematic? As evidence from both inside and outside the United States makes clear, centralization and control do not work; rather, freedom is the force that sparks educational improvement. Freedom unleashes competition, which, in turn, drives innovation and leads to specialization. The idea that there should be one monolithic set of standards and that everybody should move at the same rate makes no sense, as anyone who has met more than one child can readily attest.

Moreover, real accountability, immediate accountability, comes from freedom, choice, the ability to leave a provider that is not giving you what you want and take your business elsewhere. That is why there are a lot of recommendations for what to do when states get rid of Common Core.

Ultimately, the solution to America’s education problems is not more centralization. Instead, the answer is to create school choice for everyone.

Common Core appeals to Dewey disciples, to Progressives, because finally the masses of unenlightened Americans can be molded and coerced into a proper worldview and leave antiquated ideas and values behind.

But Common Core is nothing more than a Trojan Horse, enslaving towns and local communities to the mandates of Washington, and thereby the Progressive-driven NEA.

This country was birthed by people seeking freedom to live and worship, freedom to raise their offspring with a certain knowledge of God and the world He created. Common Core in the hands of über Progressives would seek to supplant the wisdom and role of parents with the mantra of secular and socialist ideals.

Common sense and real wisdom should warn us away from the centralized control of Common Core, and back to the time-tested truths of our forebears. 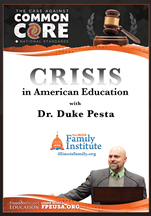 IFI video recorded an event we had earlier this year with Dr. Duke Pesta, a nationally renown expert on the dangers of Common Core.  This DVD is available with any donation of $20 or more.

If you are a taxpayer, have young children, grandchildren, nephews, nieces, are an educator, are a therapist, are a religious leader, are an elected official of any party, or care about very young children getting an excellent education in grades K-12, it would be worth your time to learn more about the federal takeover of education.  Watch it yourself or with a group!