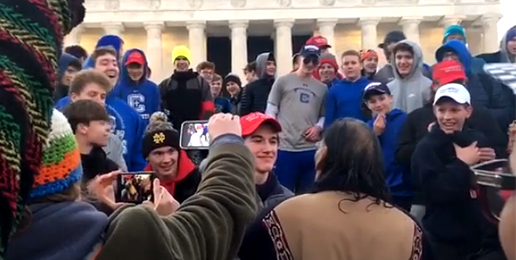 Michelle Grissom, a social studies teacher at Mountain Ridge Middle School in Douglas County, Colorado, has been put on leave following her horrendous tweets about a Covington Catholic High School student. In her vindictive and indefensible quest to harm a student by “doxing” him, she mistakenly doxed the wrong student. “Doxing” refers to “searching for and publishing private or identifying information about (a particular individual) on the Internet, typically with malicious intent.”

She attempted to publicly smear Nick Sandmann, the teenage boy whom Native American drummer Nathan Phillips tried to intimidate, but she instead identified Covington student Jay Jackson—who wasn’t on the trip to Washington D.C. She tweeted these words:

“His name is Jay Jackson. His twitter account is closed to non followers so we won’t interfere with his training #HitlerYouth.”

I assure you this is not Jay Jackson…he played in a varsity basketball game last night in Park Hills, Kentucky and another game today in Middletown, Ohio the person has been identified please remove this post and apologize for accusing someone without evidence

With galling arrogance and lack of empathy for what she had done to Jay Jackson, she responded to his father:

Listen, I’m happy to retract his name if that’s not him. Though according to his school’s schedule, he didn’t play today unless he’s playing for another team. His name is all over twitter, so you’ll want to convince more than me.

Dr. Jackson sent proof. Finally convinced of her egregious and dangerous error and with a insufferable hostility and a stunning absence of humility, she tweeted,

I officially retract using Jay Jackson from Covington Catholic High School’s name as the racist and disrespectful student who mocked Native American, Nathan Phillips. I apologize to Jay Jackson and his family.

No evident remorse for the harm she did and the danger she put this boy and his family in. No tweets about the inappropriate, disrespectful, confrontational actions and subsequent deceit of Phillips—aka Nathan Stanard. No tweets about the “Black Hebrew Israelite” hate group hurling all manner of anti-homosexual, anti-Native American, and anti-white epithets.

Her tweets reveal not only her arrogance, hatred, ideological bias, lack of compassion, and poor judgment but also her unfitness for teaching in a public school. Her tweets violated school policy on the use of social media by district employees which states the following:

Whenever you use social media, use good judgment…. Avoid using statements, photographs, video or audio that reasonably could be viewed as malicious [or] unprofessional.

While not all government teachers would engage in behavior so reckless and destructive, you better believe countless “change-agents” feel this way about conservatives and seek to socially construct such views in other people’s children using public funds.  Their goal is to transform other people’s children into ideological clones of themselves—on the public dime, of course.

Grissom has been put on leave. Let’s hope the district administration and school board have the good sense to fire her.

On Saturday, March 16, 2019, the Illinois Family Institute will be hosting our annual Worldview Conference. This year’s conference will focus on the “transgender” revolution. We already have commitments from Dr. Michelle Cretella, President of the American College of Pediatricians; Walt Heyer, former “transgender” and contributor to Public Discourse; Denise Schick, Founder and Director of Help 4 Families, and daughter of a man who “identified” as a woman; and Doug Wilson, who is a Senior Fellow of Theology at New Saint Andrews College in Moscow, Idaho, and pastor at Christ Church in Moscow, Idaho .

The Transgender Ideology:
What Is It? Where Will It Lead? What is the Church’s Role?
Click here for more information!