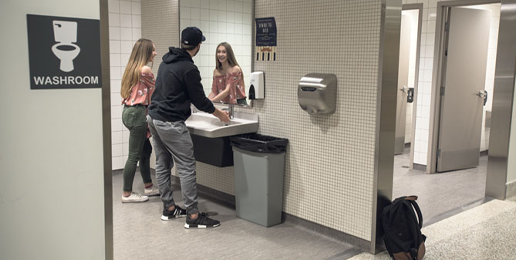 As the school year begins, public elementary, middle, and high schools across the country are being asked by parents of “trans”-identifying children to sexually integrate restrooms and locker rooms. These parents are making the presumptuous request for all children to be forced to share private spaces with opposite-sex peers. School boards and administrations are acquiescing, some because they’ve embraced “trans”-cultic assumptions and others out of fear of litigious leftists. All suffer from indefensible ignorance on an issue of urgency and critical importance.

Here are just a few of the things about which most school board members and administrators remain ignorant:

In on-line forums, parents have been reporting that their children are experiencing what is described here as “rapid-onset gender dysphoria,” appearing for the first time during puberty or even after its completion. The onset of gender dysphoria seemed to occur in the context of belonging to a peer group where one, multiple, or even all of the friends have become gender dysphoric and transgender-identified during the same timeframe. Parents also report that their children exhibited an increase in social media/internet use prior to disclosure of a transgender identity.

The worsening of mental well-being and parent-child relationships and behaviors that isolate [adolescent and young adult children] from their parents, families, non-transgender friends and mainstream sources of information are particularly concerning. More research is needed to better understand this phenomenon, its implications and scope.

Ignorance and cowardice are on full display in a Kansas City, Missouri school district that has installed co-ed restrooms in two new elementary schools and retrofitted two middle schools and one high school with sexually-integrated restrooms. The walls and doors in stalls are floor-to-ceiling, and there are common areas with shared sink troughs, so boys and girls can wash up together.

Executive director of organizational development, Rochel Daniels, suggests that co-ed restrooms were necessary because of the district’s “policy about non-discrimination.” Hmmm, that’s weird because Title IX of the Educational Amendments of 1972 says that “A recipient [of federal funds] may provide separate toilet, locker room, and shower facilities on the basis of sex.”

Of course, the signs on the spanking new restrooms don’t say “co-ed.” That would expose too much. The signs say “gender-neutral.” That term is silly because the “trans” cult asserts with sacrilegious fervor that “gender” refers to the socially-constructed roles, conventions, and behaviors arbitrarily associated with males or females. It makes no sense to designate restrooms “role-neutral.” No one has ever cared what roles restroom-users assume or conventions they adopt as they live and move and have their being before and after excreting. All that has mattered when it comes to restroom-usage is their biological sex. The signs, however, inadvertently admit the co-ed nature of the restrooms: They also include the symbols for the two only two sexes that exist.

What these silly signs are likely alluding to is not “gender” but “gender identity,” which “trans” cultists define as the subjective, internal, felt sense of being male or female. If “trans” cultists are to be believed—which they shouldn’t be—there are scores of existing “gender identities.” If “trans” cultists win the day, signage should say something like “all gender identities,” and those pesky male/female symbols erased. As with “gender,” when it comes to restroom-usage, no one has ever cared about the subjective, internal, felt sense of the maleness or femaleness of restroom-users. Why should they? What do I care if the woman in the stall next to me wishes she were a man?

In addition to the aspects of the “trans” debate listed above of which school administrators and board members are largely ignorant, there’s another relevant matter never discussed or likely even contemplated by our fearless leaders: epistemology. That’s a big word for the study of knowledge. What do we know and how do we arrive at knowledge? Can we rely on the truth of our beliefs? The Stanford Encyclopedia of Philosophy explains that epistemology is,

School administrators and board members are making revolutionary changes in restroom and locker room practices and policies based on assumptions and information. What are those assumptions? Are they sound? What criteria do they use to evaluate the soundness of these assumptions? If they base their decisions on information, what criteria do they apply to the research cited or the organizations that publish the research? Do they seek out and evaluate dissenting views applying the same standards to all research? So many necessary questions completely ignored.

The request by children or teens to have all others refer to them by incorrect pronouns or to force opposite-sex peers to share private spaces with them is what the “trans” cult and its collaborators refer to as “social transitioning.” The word “social” implies society, which in turn assumes the notion of the common good. How do we know whether its good for children to access opposite-sex spaces? Is it good for all children? It’s arguable that it’s good for gender-dysphoric children; it’s even more arguable that it’s good for all children. How is “good” defined?

Schools are discussing whether co-ed restrooms equipped with toileting closets and shared sinks undermine modesty. Will these types of restrooms serve as an incremental step in desensitizing students at young ages to engaging in private bodily functions with opposite-sex peers? Will these types of facilities thereby cultivate or undermine the virtue of modesty? Will these types of facilities reinforce the belief that objective, immutable biological sex per se is profoundly meaningful or will they reinforce the “trans”-cultic belief that biological sex per se has no intrinsic meaning?

So many necessary questions completely ignored.