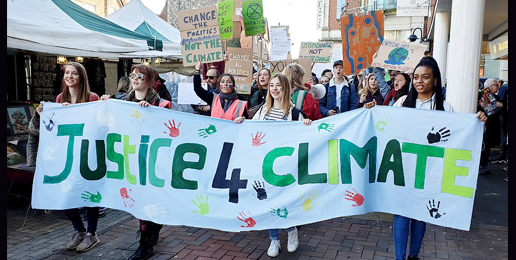 The children we spoke to, all of whom admitted to being “taught” about the importance of alleged man-made global warming and activism in their schools, knew very little about the science, the enormous cost of the “solutions,” or even who paid for them to fly in from around the world.

But they were all sure that time was running out for governments and the UN to supposedly save the world from the gas exhaled by every living person. Human emissions carbon dioxide, known as the “gas of life” to serious scientists, is said by the UN’s scientists to be responsible for everything from warming and hurricanes to droughts and floods.

The children we spoke to, regurgitating discredited talking points given to them by adults seeking to exploit them for the “cause,” were fully onboard. But ironically, the UN-backed propaganda machine spreading climate disinformation ran into major trouble when its previous celebrity child propagandist, Greta Thunberg, turned against the summit.

Blasting the UN summit as a scam so “people in power” could engage in “greenwashing, lying and cheating,” the Swedish girl exploited for years by the UN and the world media refused to even attend. She also lambasted the UN for hosting its event “in a tourist paradise” in “a country that violates many basic human rights.”

The children and youth area, one of the largest in its section of the summit, featured coloring books, free coffee, and white European handlers shuffling African children in front of media cameras to parrot their climate lines. It was a grotesque spectacle of child exploitation for dangerous political goals—goals that the children were too young to truly understand. Some children were younger than 12.

“They may be small, but their voices have been some of the loudest in the climate action movement,” the Reuters propagandist wrote, highlighting the story of an 11-year old who chased a British politician around demanding the release of some jailed climate activists.

The “children and youth” component of the UN climate summit, which has been widely touted by governments and the UN itself, was only made possible by the sort of public-school indoctrination covered in The Newman Report last week. Instead of brainwashing children with global warming propaganda, children should be taught to think for themselves. The future is literally at stake.

This article was originally published by Freedom Project Media.