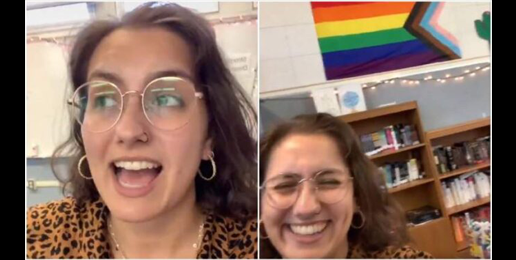 Remember when homosexuals lied through their teeth saying all they wanted was to be free to do what they wanted in the privacy of their bedrooms? Those were the days, my friend, the gullible thought they’d never end. But they did end, and now we pay the salaries of ditzy leftist propagandists to brazenly do what they do best.

The latest example of classroom indoctrination comes from Kristin Pitzen, English teacher in the Newport-Mesa Unified School District in Orange County, California who wants her students to pledge allegiance to the “LGBTQ” flag. If parents in that district are lucky, she will be a former teacher shortly.

What’s remarkable is that none of Pitzen’s students needed to covertly record her classroom propaganda, because Pitzen proudly posted her efforts to use her publicly subsidized job to inculcate other people’s children with her distaste for America and fondness for “LGBTQ” dogma: 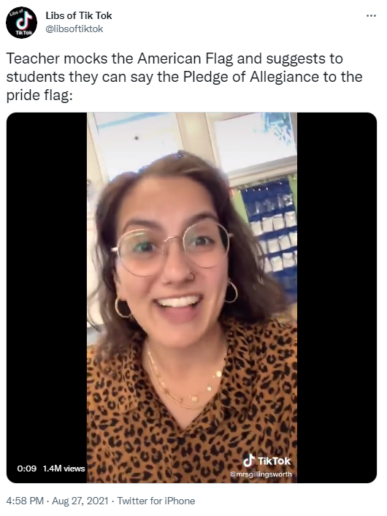 Someone ought to tell the giggly, America-hating Pitzen that her belief that cross-sex impersonation or homoerotic acts and relationships are worthy of allegiance, affirmation, and celebration is a non-neutral, subjective, arguable moral claim—not an inarguable, objective fact. No government school employee has the ethical or pedagogical right to use public resources to promote as true their arguable moral beliefs.

This wasn’t the only video the prideful Pitzen posted on TikTok to proclaim her allegiance to sexual perversion. She posted this during “pride” month: 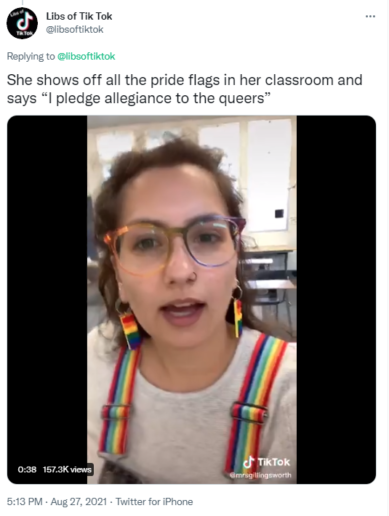 Now that Pitzen’s videos have gone viral, her district is catching flak and Pitzen the public servant has gone underground, taking all her social media accounts with her.

Pitzen is a leftist English teacher, and leftist English teachers are known for their professed love of diversity and literature, which makes Pitzen’s book reviews on the well-known book review site Goodreads so odd. Out of the 240 books she has reviewed between September 2018 to August 2021, a surprising number of them deal with sexual perversion—specifically, homosexuality and cross-sex impersonation. I stopped counting at 50, which means over 20 percent of her reading list is about sexual deviance, and few of the titles will likely stand the test of time. Not much diversity in her “literary” choices.

What isn’t surprising is that the change agents we pay to corrupt our children have corrupt minds. Garbage in, garbage out.

Surely her administration knew her room was dripping with “LGBTQ” paraphernalia before this controversy blew up. While conservative teachers are getting fired for refusing to use incorrect pronouns or for saying a prayer on a football field, outrageous acts are committed by progressives” like Pitzen every day and rarely are there consequences.

Now that conservatives are beginning to retrieve those dusty spines from the attic, there is some hope that this kind of ideological abuse of taxpayer-funded schools will stop.

It would be better still if Christians would think more deeply about how God wants them to train up their children. No teacher who affirms family structures with two moms or two dads, who celebrates homoeroticism, or who believes cross-sex impersonation constitutes an authentic and good identity is capable of training up children in the way they should go. Sure, they might be able to teach children multiplication tables, but they cannot train them up in the way they should go.

Social justice warriors devoid of a Christian worldview do not address homoeroticism and cross-sex impersonation relentlessly in order to end bullying. Pitzen just told us why they do it. They hope to foster allegiance to leftist/pagan sexual dogma—dogma that is destroying the family, the church, culture, and the temporal and eternal lives of children. Pitzen and her ilk hope to destroy theologically orthodox worldviews and fill the vacuum with evil ideas, which they in their spiritual blindness mistake for good.

If Pitzen and her many ideological collaborators—which includes any teacher who endorses ideas derived from critical race theory—are right on sexuality, then the church has been wrong for 2,000 years. Do Christians really think the entire history of the church until the latter half of the latter half of the 2oth Century was wrong on sexuality? Do they think today’s leftist scholars are wiser? Do they think the movement to normalize cross-dressing, homoeroticism, same-sex faux-marriage, and motherless families is driven by sound scholarship or by sinful desire, politics, and cowardice?

The leftist ideological colonization of America, facilitated by de facto censorship; laws; military, government, and corporate re-education; public school mal-education; and threats of loss of employment and/or fines, is celebrated by all the cool people. Well, I say it’s time to decolonize our bookshelves, our bloated government bureaucracy, the military, and our classrooms.