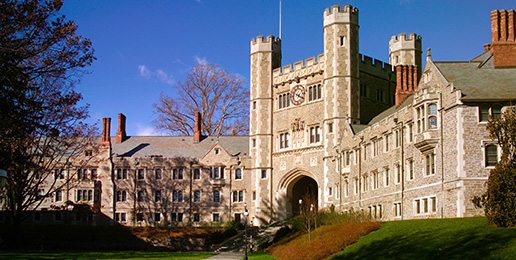 Be Thankful for Some Princeton Students
Written By Laurie Higgins   |   11.26.15
PRINT

In light of the self-indulgent, self-referential, and oppressive efforts of both students and faculty to impose their ideological views and circumscribe speech on college campuses, it is refreshing and inspiring to see that not all students can be intimidated. A student group has formed at Princeton University that seeks to restore the mission of Princeton to pursue truth through a critical examination of all ideas. They seek to prevent university-sponsored separatism and de facto censorship, arguing that not even “identity-forming values” should be immune from criticism.

Read this letter to the president of Princeton University from the ten Princeton students who formed the Princeton Open Campus Coalition, and be thankful for their wisdom and courage. Then have your children read it, especially if they’re in high school or college:

We write on behalf of the Princeton Open Campus Coalition to request a meeting with you so that we may present our perspectives on the events of recent weeks. We are concerned mainly with the importance of preserving an intellectual culture in which all members of the Princeton community feel free to engage in civil discussion and to express their convictions without fear of being subjected to intimidation or abuse. Thanks to recent polls, surveys, and petitions, we have reason to believe that our concerns are shared by a majority of our fellow Princeton undergraduates.

Academic discourse consists of reasoned arguments. We simply wish to present our own reasoned arguments and engage you and other senior administrators in dialogue. We will not occupy your office, and, though we respectfully request a minimum of an hour of your time, we will only stay for as long as you wish. We will conduct ourselves in the civil manner that it is our hope to maintain and reinforce as the norm at Princeton.

This dialogue is necessary because many students have shared with us that they are afraid to state publicly their opinions on recent events for fear of being vilified, slandered, and subjected to hatred, either by fellow students or faculty. Many who questioned the protest were labeled racist, and black students who expressed disagreement with the protesters were called “white sympathizers” and were told they were “not black.” We, the Princeton Open Campus Coalition, refuse to let our peers be intimidated or bullied into silence on these–or any–important matters.

First, we wish to discuss with you the methods employed by protesters. Across the ideological spectrum on campus, many people found the invasion of your office and refusal to leave to be troubling. Admittedly, civil disobedience (and even law-breaking) can sometimes be justified. However, they cannot be justified when channels of advocacy, through fair procedures of decision-making, are fully open, as they are at our University. To adopt these tactics while such procedures for debate and reform are in place is to come dangerously close to the line dividing demonstration from intimidation. It is also a way of seeking an unfair advantage over people with different viewpoints who refuse to resort to such tactics for fear of damaging this institution that they love.

Second, we welcome a fair debate about the specific demands that have been made.

We oppose efforts to purge (and literally paint over) recognitions of Woodrow Wilson’s achievements, including Wilson College, the Woodrow Wilson School of Public and International Affairs, and his mural in Wilcox Dining Hall. As you have noted, Wilson, like all other historical figures, has a mixed legacy. It is not for his contemptible racism, but for his contributions as president of both Princeton and the United States that we honor Wilson. Moreover, if we cease honoring flawed individuals, there will be no names adorning our buildings, no statues decorating our courtyards, and no biographies capable of inspiring future generations.

We worry that the proposed distribution requirement will contribute to the politicization of the University and facilitate groupthink. However, we, too, are concerned about diversity in the classroom and offer our own solution to this problem. While we do not wish to impose additional distribution requirements on students for fear of stifling academic exploration, we believe that all students should be encouraged to take courses taught by professors who will challenge their preconceived mindsets. To this end, the University should make every effort to attract outstanding faculty representing a wider range of viewpoints–even controversial viewpoints–across all departments. Princeton needs more Peter Singers, more Cornel Wests, and more Robert Georges.

Similarly, we believe that requiring cultural competency training for faculty threatens to impose orthodoxies on issues about which people of good faith often disagree. As Professor Sergiu Klainerman has observed, it reeks of the reeducation programs to which people in his native Romania were subjected under communist rule.

We firmly believe that there should be no space at a university in which any member of the community, student or faculty, is “safe” from having his or her most cherished and even identity-forming values challenged. It is the very mission of the university to seek truth by subjecting all beliefs to critical, rational scrutiny. While students with a shared interest in studying certain cultures are certainly welcome to live together, we reject University-sponsored separatism in housing. We are all members of the Princeton community. We denounce the notion that our basic interactions with each other should be defined by demographic traits.

We hope that you will agree to meet with us. We will be happy to make ourselves available to meet in your office at your earliest convenience. We are also requesting a meeting with the Board of Trustees. For reasons you have articulated in your recent message to the community, there is no time to waste in having these discussions.

Unlike their counterparts at other universities, Princeton undergraduates opposed to the curtailment of academic freedom refuse to remain silent out of fear of being slandered. We will not stop fighting for what we believe in.

Thank you very much for your consideration. We look forward to your reply.

Before spending thousands of dollars on their children’s college education, parents should critically examine how fully the colleges and universities their children are considering are committed to intellectual diversity. And when selecting a college, perhaps a consideration of how likely the institution is to foster wisdom and a love of truth should take precedence over the prestigious reputation of  the school.

If you think our work is worthy, would you please consider an end of the year tax deductible gift to support the work of the Illinois Family Institute?

Your support is directly helping us establish a strong and consistent presence in the public square — representing your voice, and your values — proudly pro-life, pro-marriage and pro-family.