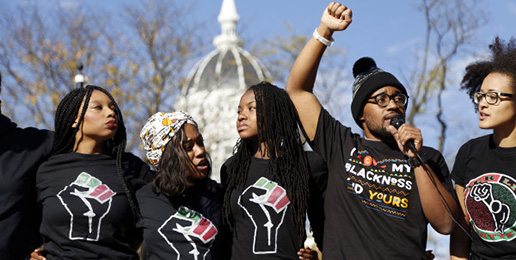 Concerned Student 1950, led by University of Missouri graduate student Jonathan Butler, second from right, speaks following the announcement that University of Missouri System President Tim Wolfe would resign Monday, Nov. 9, 2015, in Columbia, Mo. Wolfe resigned Monday with the football team and others on campus in open revolt over his handling of racial tensions at the school. (Sarah Bell/Missourian via AP) MANDATORY CREDIT
Are Liberals Finally Ready to Tame the Political Correctness Monster?
Written By Eric Metaxas   |   12.02.15
PRINT

Political correctness, which has gone after Christians for years, has finally turned on its progressive creators.

For decades, PC culture has dominated many of America’s college campuses, a fact highlighted in Allan Bloom‘s ground-breaking 1987 book “The Closing of the American Mind.” PC culture tries to shame and silence those of us with traditional beliefs as though we’re bigots or rubes.

I know about PC culture first hand, having graduated from Yale University in the 1980s. Recent events at my alma mater and on other campuses reveal that this PC monster is starting to eat its own, and the progressives, I’m happy to say, are finally getting concerned.

We’ve talked about the whole idea of “The Coddling of the American Mind,” of universities dealing with emotionally fragile young people as if they were children. As part of PC culture, a surprising number of schools, including Yale, now annually give advice to students on what kind of Halloween attire is appropriate, to avoid offending anyone.

Well, a couple of professors had the temerity to question whether such coddling is appropriate in a university setting.

One wrote in an e-mail to students, “Is there no room anymore for a child or young person to be a little bit obnoxious … a little bit inappropriate or provocative or, yes, offensive?”

The professor continued: “if you don’t like a costume someone is wearing, look away, or tell them you are offended. Talk to each other.”

This advice was too much for one Yalie, who launched a profanity-laced tirade at a professor and demanded more coddling: “It is not about creating an intellectual space,” she screamed. “It is not! Do you understand that? It is about creating a home here!”

Then, of course, there are the goings-on at the University of Missouri, where anti-racism protesters blocked and shoved a student photographer who tried to cover their demonstration.

The students chanted, “Hey, hey, ho, ho, journalists have got to go.”

Even a Missouri communications professor supporting the rally joined the mob and was caught on film saying, “Help me get this reporter out of here. I need some muscle.”

Writing in the New Yorker magazine, Jonathan Chait, who is no conservative, notes, “The upsurge of political correctness is not just greasy-kid stuff, and it’s not just a bunch of weird, unfortunate events that somehow keep happening over and over. It’s the expression of a political culture with consistent norms, and philosophical premises that happen to be incompatible with liberalism.”

It’s a culture that brooks no opposition and will use force when it can. Chait says it’s time for progressives to get serious about the PC monster and stand up for pluralism — before it’s too late.

So while we can celebrate the fact that the secular media are finally becoming indignant over the political correctness monster that they themselves in many cases have fed and pampered for lo these many years, maybe we should pause and ask this question: What is our role? How should followers of Christ respond?

It’s easy to laugh at the contradictions and confusions of political correctness, to fold our arms and watch the chickens come home to roost. But perhaps we ought rather to engage. Yes, we’ll take our lumps when we do. But this is no time for “I told you so’s”. It’s time to set an example of civility — by more consistently speaking the truth in love, whether the issue is race, gender, human sexuality, religion, or poverty.

As our old friend Chuck Colson once said, “… in a democracy, civility is not an option, it’s a precondition that makes our system possible … Without civility, political discourse becomes hostile and polarized. In the resulting chaos we become vulnerable to tyranny.”

It’s good that political correctness on campus is being exposed for what it is: tyranny. To begin putting the PC monster back in its cage, a renewed commitment to civil discourse is in order. Let’s lead the way.