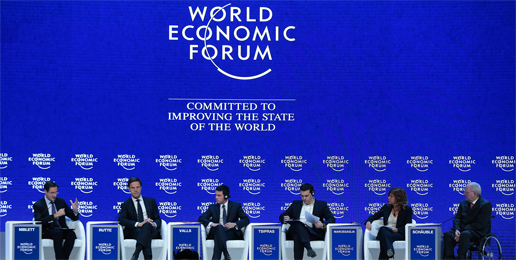 The Connections Between the Global Elites, the World Economic Forum, and the Social-Emotional Learning Movement
04.23.22
PRINT

Is social-emotional learning (SEL) being deliberately used in our public schools to promote the World Economic Forum (WEF) agenda? The Collaborative for Academic, Social, and Emotional Learning (CASEL) was instrumental in initiating the SEL movement that has quickly spread across the globe. The connections of CASEL’s founders and those associated with the WEF are astounding. Some of CASEL’s creators, founding organizations, and board members are connected to the Rockefellers, the Klaus Schwab Family, and the Club of Rome/WEF.

The transition to SEL places more of an emphasis on emotional rather than academic development. This new style of education is heavily entrenched in the public schools and is the main method of promoting equity-based education. As with many of the policies affecting this generation of children, CASEL embraces activism on their website by “promoting justice-oriented school and civic engagement.” The SEL movement also acquaints children with the idea that collective rights usurp their individual rights. CASEL says little about helping an individual child reach their individual potential. The framework of self-management, responsible decision making, relationship skills, social awareness, and self-awareness creates a particular political mold and lens through which children are taught to view the world. Individual creative/out-of-box thinking has been integral to the success of the United States. What effect the SEL movement will have on this type of innovative thinking and how it will hamper the ability of children to grow and develop their individual strengths remains to be seen.

“Educators of today and tomorrow will be in a better position to discover the immensity and the nobility of their task: to lead the way to an evolution of the mind and behavior and thus to give birth to the new—one and manifold—civilization.”

“But that which is cerebral and intellectual in him cannot approach so mysterious a truth as reality unless it equally resorts to the apparently irrational, the intuitive and the emotional, which are, to a great extent, the foundation of human relationships.”

On their website, the Club of Rome claims their “goal is to actively advocate for paradigm and systems shifts which will enable society to emerge from our current crises, by promoting a new way of being human, within a more resilient biosphere.”

The Club of Rome has interest in youth programs which seek to transform children. Michael Dorsey, member of the Club of Rome, is a founder of the Sunrise Movement, a program that creates radical child activists who proclaim on their website that they, “are the climate revolution.” Similarly, on their website, the Club of Rome discusses a youth “Psychological Mastery Training Program” in order to “build emotional self-awareness” in future “community leaders” so that they will be able to deal with “the distress of climate trauma and vicarious trauma exposure.”

Likewise, CASEL engages in initiatives that seek to transform, categorizing these initiatives on their website as Transformative SEL. They state that this type of SEL helps students “critically examine root causes of inequity,” “[redistribute] power,” and “emphasizes development of identity…within the CASEL framework.”

According to Edutopia.org, Social and Emotional Learning: A Short History, CASEL originated at a meeting at the Fetzer Institute in 1994. It was created as a result of the Comer Project, which, according to Encylcopedia.com, began in 1968 in the New Haven, CT schools. The Comer Project achieved success by focusing on student’s “social skills and self-esteem.” In 1990, the project received $15 million from the Rockefeller Foundation “to [introduce] the program in schools throughout the United States.” David Rockefeller’s daughter, Eileen Rockefeller Growald, NY Times author and Fetzer Institute fellow, Daniel Goleman, and the son of Sargent Shriver and Eunice Kennedy Shriver, Tim Shriver, were among some of the original creators.

In 1995, Goleman, published the best-selling book Emotional Intelligence. It proposed that emotional skills should be incorporated into school curriculum based on the premise that emotional skills are as important as IQ for success. Techniques such as mindfulness were integrated into the public schools. This led to a shift in education, converting it to a holistic or “whole child” style of education. Through these programs, teachers transitioned from educators into child developers. Developmental psychology began to be used throughout the school day often without the parent’s awareness or inclusion. Goleman has links to the World Economic Forum. He spoke at the WEF Annual Meeting in 2011, and he is listed on the WEF agenda webpage.

Current Board Chair, Tim Shriver, was a founder of CASEL. He is a member of the David Rockefeller connected Council on Foreign Relations. He is also “a regular participant in the World Economic Forum,” stated in the WPP.com article, titled WPP Appoints Timothy Shriver, Chairman of Special Olympics, as non-exec director. According to their 2019 tax filings, Shriver received $400,671 from Rockefeller Philanthropy Advisors. In 2012, he wrote an article for the HuffPost titled, Reflections from Davos. He wrote another article for the HuffPost in 2017 titled,  What Davos Taught Us: Moving from Information to Inspiration. In the article, he declares,

“we will be on our way to that ‘new collective and moral consciousness’ the world so desperately needs and which so many of us want to choose.” In 2018, he was the Association for Supervision and Curriculum Development (ASCD) Leadership Institute for Legislative Advocacy (LILA) Keynote Speaker. Although context was not given for his presentation, the bottom of one slide in his presentation says to educators “you are trying to lead a cultural revolution.”

Another slide in the presentation lists the WEF skills that “involve social and emotional intelligence,” which include people management, judgement and decision making, and negotiation.

The 2022 Wisdom 2.0 Conference is a global mindfulness summit sponsored in part by a CASEL founding organization and supporter, the Fetzer Institute. Another board member of CASEL, Marc Brackett, lists Wisdom 2.0 as one of his consultation projects on his website. Furthermore, Brackett has a company, Oji Life Lab to help improve emotional intelligence and decision skills. A top investor in his company was Bo Shao of Matrix Partner China. Shao is a WEF Young Global Leader and founder of Evolve Ventures. He will be a speaker at the 2022 Wisdom 2.0 Conference. Dr. Richard Davidson, founder of the Center for Healthy Minds, was a past speaker at the Wisdom 2.0 Conference. The Wisdom Leadership 2.0 webpage says that he has “[led] conversations on well-being on international stages such as the World Economic Forum.” Davidson has a WEF page and is a member of the World Economic Forum’s Global Agenda Council on Mental Health. He also co-authored a book with CASEL co-founder Daniel Goleman titled Altered Traits: Science Reveals How Meditation Changes Your Mind, Brain, and Body.

An Esalen.org article titled Wellbeing Project Reveals Changemakers’ Need for Personal Support informs that the Fetzer Institute is in a joint project along with the Esalen Institute called the Wellbeing Project. As indicated on their website, The Tavistock Institute, the World Economic Forum Cultural Leaders, the Schwab Foundation (Klaus Schwab Family), and the Center for Healthy Minds are also involved with this project. They describe the Wellbeing Project impact as “[serving] the needs for social changemakers.” A subset of the Wellbeing Project is aimed at teachers and caregivers. In the  Inaugural Teacher Wellbeing Research Report Launch Video, Marc Brackett is listed as a resource.

Increasingly, many are waking up to realize the impact that the WEF has on our everyday lives. The connections of the WEF and those involved with the origination of the SEL movement run deep. The Rockefellers, the Schwab Family, the Club of Rome, and the WEF are all connected to the elites and organizations involved with the formation of CASEL. They created an educational movement that focuses on the emotional and social over the logical and rational. CASEL’s framework, which utilizes the categories of self-management, responsible decision making, relationship skills, social awareness, and self-awareness, is subjective. Who gets to decide what is and what is not being socially aware? Because that person or group of people has a tremendous amount of power in our schools today.

King Alexander, Schneider Bertrand. The First Global Revolution: A Report by the Council of the Club of Rome, New York, NY: Pantheon Books; 1991.

Schmelzer, Matthias. Born in the corridors of the OECD: the forgotten origins of the Club of Rome, transnational networks, and the 1970s in global history, Journal of Global History. March 2017:34.

This article was originally published by The Liberty Sentinel.