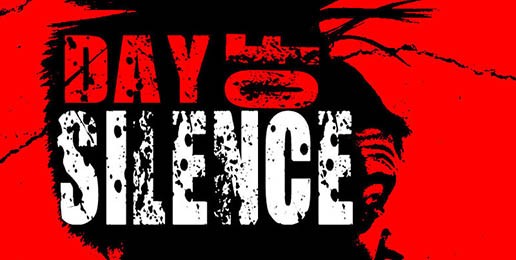 On a day when the truth is suppressed and sin exalted, why let our children participate?

A broad coalition of pro-family groups recommends that students stay away from school on Friday, April 17, 2015 the national “Day of Silence,” if the school is officially recognizing and/or encouraging students to observe this event during instructional time by a silent protest. High schools and even some middle schools are now the focus of this event.

The Day of Silence goal is not, as I am told frequently by outraged emails from misinformed students, to “help end all bullying.” The real goal is to exploit the tender sympathies of kids to promote homosexuality and gender confusion. The agenda is everything, Judeo-Christian morality is the enemy—and sadly, kids are the tools.

GLSEN teaches students that homosexuals and gender confused people are “silenced” and under persecution by those who object to this behavior, and that traditional moral concerns cause bullying. No hard, objective data exists to support this contention, and the event itself causes hostility, confusion, and division.

Here are ten reasons I believe Christian students in particular and possibly even teachers and staff should refuse to honor this event by school attendance:

1. A silent protest in support of immoral, God-dishonoring behavior is in itself profoundly deceptive. All sexual behavior outside man/woman marriage is sinful in God’s eyes. Why should Christian students and teachers be in the position of accommodating this flagrant violation of their principles?

2. Any explicit or implicit message encouraging teens and even younger students to experiment freely with homosexual behavior is not “social justice” or “tolerance,“ but actually, child corruption.

3. Allowing classroom silence to honor the Day of Silence unleashes tremendous peer pressure for students and even teachers to endorse sexual immorality, or be considered “enemies” of those peers and teachers proudly involved in homosexuality. This puts people of faith in the position of violating Christian doctrine through tacit approval ( Romans 16:17-18; Ephesians 5:11). They are also intimidated into self-censoring their First Amendment rights.

4. The Day of Silence encourages students to nurture prejudiced, hostile and bigoted attitudes against Christians and others with traditional moral beliefs, and to spread inaccurate and harmful information.

5. Using legitimate concerns about bullying and teen suicide to advance the promotion of homosexuality in schools is educational malpractice. It’s totally unnecessary to stop bullying and prevent harm to students, and Christians should not be a party to this gross distortion of a genuine problem. No one needs to embrace homosexuality or gender confusion in order to prevent bullying, but GLSEN routinely takes this deceitful position.

6. Teachers know harassment when they see it. They can simply say, “Cut it out!” But GLSEN and the Day of Silence pressures teachers to amend this to, “Cut it out, because you are only permitted to say good things about homosexuality!” When did we all sign up to become public relations agents for the good reputation of homosexuality? This viewpoint discrimination forces an untruthful and ungodly agenda on staff members, when stopping verbal harassment can be accomplished without becoming champions of “gay” behavior.

7. There are legitimate lessons students should learn about prejudice and bias. But Day of Silence promoters deceptively link moral objections about homosexuality to racial discrimination or anti-Semitism in an attempt to legitimize the pro-homosexual agenda and portray homosexuals as perennial victims, while disguising the harmfulness and risk.

8. Teachers have used the DOS to inappropriately become classroom advocates and models of this deviant behavior. In one Ohio school, a teacher used a Power Point to tell students about her “gay” support and even disclosed to students that she was a lesbian, without prior notice to parents or permission from her principal.

9. The health and lifestyle risks of homosexuality are virtually never shared on the Day of Silence. Instead, students are given the deceitful impression that homosexuality is just as safe and worthy an identity as heterosexual dating and marriage.

10. The DOS message inhibits Christians from witnessing to their peers caught up in homosexuality or gender confusion. There is salvation through Jesus Christ and the hope of leaving this sin behind. Calling homosexuality a sin on the Day of Silence would be considered “hateful,” when it is actually God-honoring and respectful to the hearer. It may lead them to an eternal home with God. But that won’t happen if the truth is suppressed, which it always is on the Day of Silence. Stay home that day, and choose to witness on another, where perhaps you will have a fair chance of being heard.

For more information about the DOS Walkout, go HERE.