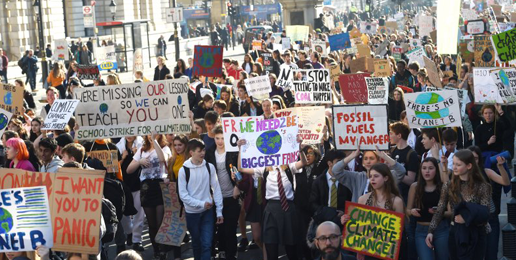 In the face of escalating indoctrination and fear-mongering about alleged man-made global warming in government schools around the world, more than seven in 10 children now say they are afraid of “climate change” and environmental issues. Climate alarmists said the results showed the need for even more climate propaganda in schools — yes, seriously.

The controversial survey of 1,000 children, commissioned by a British “eco-grocery” company known for reusing milk bottles, found that the impact “climate change” would have on animal was the top concern among one fourth of children polled. Other concerns among the brainwashed youngsters included “plastic pollution” and “rising temperatures.”

More than one third of the children said their schools or teachers were their primary inspiration, according to an outfit called “Generation Alpha” cited in news reports about the survey. Almost half, though, looked to population-control fanatic David Attenborough with the British government’s propaganda machine, BBC, as their inspiration and educator. Families took the spot for less than one fourth.

The company that commissioned the survey said it proves more brainwashing is needed. “The results show that environmental challenges are having a prominent effect on the children of today, proving that it’s never been more important to educate communities on the actions they can take to protect our planet,” said Simon Mellin, founder and CEO of the “eco-grocery” outfit behind the poll.

While that survey focused on children on the other side of the Atlantic, it is just as bad in the United States, if not worse. “Climate change” is a key component of the “Next Generation Science Standards” developed by the same quacks behind Common Core — pseudo-science standards that never once mention the scientific method. Six years ago, the National Center for Science Education revealed that about 3 in 4 “science” teachers in American government schools teach “climate change,” too.

The new survey results confirm other studies showing that children are suffering from being bombarded with doom and gloom prophecies about global warming. In fact, they are experiencing something researchers dubbed “eco-anxiety.” It is characterized by “negative” emotions such as “anger, sadness, guilt, and hopelessness,” according to a peer-reviewed study from this summer calling for more research on the trend.

The growing terror surrounding alleged man-made global warming comes as government schools also terrorize children about the supposed risks of everything from COVID to school shootings. This endless barrage of fearmongering has produced a generation of American youngsters who are losing their minds, literally, with the CDC finding that 44 per cent of teenagers say they feel “persistent feelings of sadness or hopelessness.”

The use of fear to accomplish political objectives has long been understood by tyrants. In fact, former National Socialist leader Hermann Goering — Adolf Hitler’s right-hand man — famously explained after the war that it is easy to make a population do the bidding of leaders: “All you have to do is tell them they are being attacked and denounce the pacifists for lack of patriotism and exposing the country to danger.”

Just replace “being attacked” with “having their climate destroyed by climate deniers, Americans, and capitalists,” and replace pacifists for “climate deniers,” and presto! Dealing with the people and things “exposing the country to danger” now requires all sorts of extreme “solutions” including giving up individual rights, limiting national sovereignty, and crushing prosperity. There is a reason former NASA senior climate scientist Dr. Roy Spencer refers to vicious alarmists as “global warming Nazis.”

As schools terrorize children with climate propaganda, they are then stepping in and using tactics such as “mindfulness” — a religious and spiritual practice tied to Buddhism — to supposedly help them cope. Social-Emotional Learning, or SEL, is also a big part of what passes for education today, with children propagandized to adopt New Age spirituality and far-left political views under the guise of teaching regulation and control of emotions.

Children should be playing and learning. They should not be subjected to an endless barrage of cultish propaganda paid by taxpayers aimed at transforming society under the guise of stopping the climate from changing — something that has happened since the Earth was created and presumably will continue as long as it exists. This child abuse must end. Only parents can make it stop.

This article was originally published at FreedomProject.com.

Why Do Some Climate Alarmists Want Us All Dead?
b
a
x
r