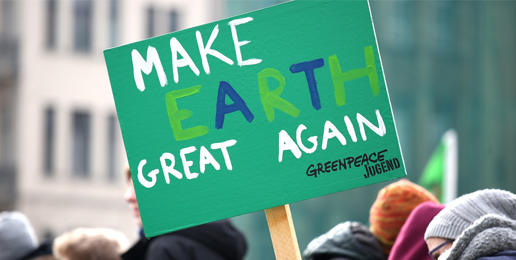 I struggle to even make the effort to outline my opposition to the so-called “Green New Deal” because it seems flatly absurd that anyone could take it serious enough to justify my time spent.  Retrofitting every building in America, spending almost $100 trillion (an amount four times more than the current astronomical national debt), providing a job for every person that wants one and paying for those who don’t – these are the kinds of juvenile ideas that get laughed out of high school government classes.

But we live in unserious times and are led by unserious politicians in every corner.

I’m opposed to the Green New Deal economically – it isn’t feasible, and would go much further than merely crippling the American economy.  It would destroy it.

I’m opposed to the Green New Deal philosophically – the history of mankind demonstrates that progress is best achieved through man’s creativeness and ingenuity, rarely if ever through central planning and demands of a taskmaster (in this case, government).

But most significantly and seriously, I’m opposed to the Green New Deal morally.  The lawmakers who have proposed these policies, and the media who champion it are intentionally favoring the wealthy over the poor, the elite over the undistinguished, the powerful over the plain.

The immediate impacts of its implementation would be higher energy costs for every American household – costs that the wealthy can afford, but the poor can not endure.  This winter alone saw far too many low-income minorities living in the Northeast had to choose between heating their homes and buying groceries.  This isn’t because of scarcity.  It’s because lack of pipeline infrastructure has prevented ample natural gas – a resource that burns much cleaner than other fossil fuels – from being utilized in communities where it is most desperately needed.

Those truly concerned about the plight of the poor would act immediately to alleviate this energy poverty.  Instead, we see the introduction of the Green New Deal that would actually escalate such poverty dramatically.  It is morally offensive to ignore the pain that would be experienced by our country’s needy if the onerous and energy-depriving demands of this backwards policy were implemented.

As Sam Thernstrom of the Energy Innovation Reform Project points out, renewables get all the love, but they are simply incapable of meeting the energy demands of our whole economy. It’s not that the sun goes down at night and the wind doesn’t always blow. It’s that in some regions, the sun gets weak and the wind stops blowing for months at a time. Batteries are improving, but not fast enough to make an all-renewables power grid practical for some time.

Meanwhile, basic humanity should require us to think about the consequences of our actions outside our own borders.  It is the height of privilege and conceit to forbid policies that would lead to the industrialization of the third world.  That is precisely what the Green New Deal would accomplish.  By shuttering fossil fuel companies and strangling their expansion, Green New Dealers effectively lock the earth’s impoverished in squalor as they jet around the world in climate-controlled luxury vehicles to brag about their contributions to the environment.  Pretending they are solving an unrealized catastrophe, they callously perpetuate the one visited upon the third-world every day.

It is the grotesque exploitation of the neediest people of our world that should be first in our minds when rejecting this latest policy proposal of those who seek to expand their own power at the expense of the powerless.