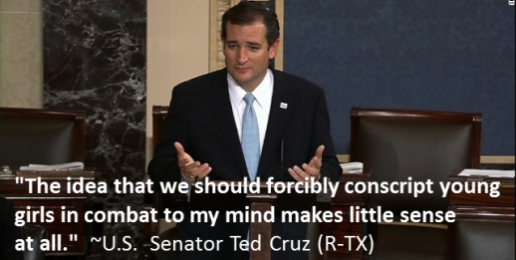 According to an Associated Press report, the U.S. Senate voted to approve a $602 billion defense bill which also mandates that our daughters register for Selective Service and a possible future draft.  This gender blind, biologically indifferent proposal was sponsored by U.S. Senator John McCain (R-AZ), who also happens to chair the U.S. Senate Armed Services Committee.

Both Illinois U.S. Senators, Dick Durbin and Mark Kirk, voted in favor of this irresponsible legislation.  The over all vote was 85 in favor, just 13 opposed.  U.S. Senate Majority Leader Mitch McConnell (R-KY) also voted for this atrocity.

U.S. Senator Ted Cruz (R-TX) spoke out in opposition to the measure, saying in an official statement that this political correct bill “is being used as a vehicle to further agendas that have nothing to do with actually defending America. Despite the many laudable objectives in this bill, I could not in good conscience vote to draft our daughters into the military, sending them off to war and forcing them into combat.”

The National Defense Authorization Act for Fiscal Year 2017 (S. 2943), if passed by the U.S. House and signed into law by President Barack Obama, would require:

The bill now heads over to the U.S. House.

Take ACTION:  Please, for the sake of our daughters and granddaughters, click HERE to send an email or fax to your local U.S. Representative.  Politely insist that they STOP the federal government from drafting our daughters for military service.