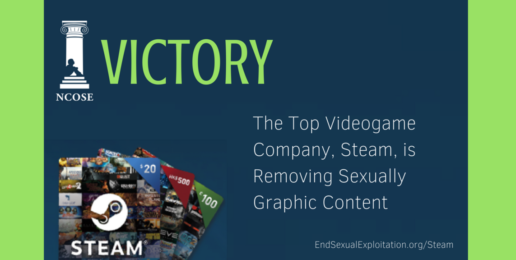 According to Gadgets 360, Steam, one of the largest distributors of online games, has contacted several videogame developers asking them to remove sexually graphic content in their games on Steam or face delisting.

This sudden action by Steam, owned by Valve, comes after a two year campaign by the National Center on Sexual Exploitation which included naming the company was named to the Dirty Dozen List, and most recently a heightened week-long grassroots campaign, which began on May 10th, where individuals from around the country requested Steam to remove sexually exploitive content.

“We are grateful to Steam® for taking a socially responsible stand against sexually exploitive videogames,” said Dawn Hawkins, Executive Director at the National Center on Sexual Exploitation. “Steam hosts approximately 35 million users who are children and teenagers, yet it also has hosted videogames that promote themes of sexual violence, exhibitionism, and rape, often depicting child-like characters in sexual scenes. It’s about time that the videogame community is responding to this #MeToo moment, and is distancing itself from gamified sexual violence.”

“Some game developers are claiming that Valve is ‘censoring’ them, but Valve is a private company that can—and should—make decisions based on creating a safe and user-friendly environment for its users,” Hawkins continued.

“When videogames include sexually graphic and degrading themes the user is not only a voyeur but an active participant in staging the scene. As our society suffers from the consequences of campus sexual assault, military sexual assault, and rising child-on-child sexual abuse, we see that normalizing the sexual use (and often abuse) of others in videogames is irresponsible on the corporate and social level.”

“We thank Steam for its decision, and encourage other gaming sites and stores to follow their lead.”