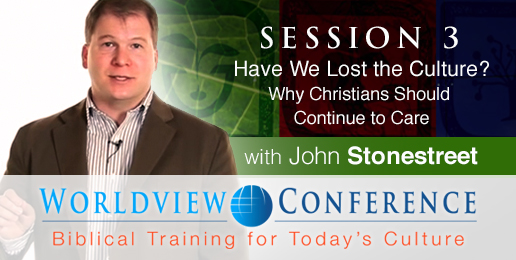 Stonestreet: Have We Lost the Culture? Why Christians Should Continue to Care
Written By David E. Smith   |   08.12.19
PRINT

What is culture? For many Christians, “culture” simply means “all the bad stuff that happens in the world,” but according to John Stonestreet, it’s far more than that. The problem is not with culture, for culture is neither good nor bad; the problem is our understanding of it.

From a working definition of culture as “what humans make of the world,” Stonestreet addresses the way we ought to participate in culture. After all, he says, one of the things God created us to do is to make culture. By asking the right questions, we can come to a right understanding of culture, and from there, we can rightly see our place in it as Christians, for we were placed in this world in this time and place for a reason, not merely to be saved as a means of escape.

This is the third of John Stonestreet’s lectures delivered at the 2019 Illinois Family Institute Worldview Conference. You can find the link to it here, and the previous lectures here. We hope and pray that you will intentionally use these free videos to further your own understanding and pass on a traditional Christian worldview to your children, grandchildren, friends and neighbors.

You can watch this presentation on the IFI YouTube channel, and find the other worldview sessions here.

John Stonestreet serves as president of the Colson Center for Christian Worldview. He’s a sought-after author and speaker on areas of faith and culture, theology, worldview, education and apologetics. John is the daily voice of BreakPoint, the nationally syndicated commentary on  the culture founded by the late Chuck Colson.

Before coming to the Colson Center in 2010, John served in various leadership capacities with Summit Ministries and was on the biblical studies faculty at Bryan College (TN). John has co-authored four books: A Practical Guide to Culture, Restoring All Things, Same-Sex Marriage, and Making Sense of Your World: A Biblical Worldview. John holds degrees from Trinity Evangelical Divinity School (IL) and Bryan College (TN). He and his wife, Sarah, have four children and live in Colorado Springs, CO.