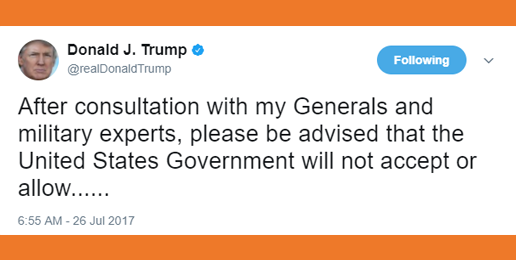 At 5:55 (CDT) this morning, President Donald Trump tweeted the following:

After consultation with my Generals and military experts, please be advised that the United States Government will not accept or allow Transgender individuals to serve in any capacity in the U.S. Military. Our military must be focused on decisive and overwhelming victory and cannot be burdened with the tremendous medical costs and disruption that transgender in the military would entail. Thank you.

Finally, a president who listens to the voices of reason, wisdom, and military expertise rather than to the cacophonous, incoherent voices of fools, Leftists, and military-antagonists.

This momentous decision comes at a critical juncture. The military was poised to allow men and women with serious psychological disorders to serve openly in the military.

Understand that you many encounter individuals in barracks, bathrooms, or shower facilities with physical characteristics of the opposite sex despite having the same gender marker in DEERS [the army’s personnel system].

All Soldiers should be respectful of the privacy and modesty concerns of others. However, transgender Soldiers are not required or expected to modify or adjust their behavior based on the fact that they do not “match” other Soldiers.

They also seek to serve openly in the military, which means impersonating and being housed with persons whose sex they do not share. That is an offense against nature and nature’s God, and a violation of the rights of the men and women who serve every American and every non-citizen who lives in this once-great nation.

What a grotesque outrage that so few Americans have said anything as the military stood poised to force men and women who are willing to sacrifice their lives for us to suffer the indignity of showering and toileting with persons of the opposite sex. If Leftists can get women in silly costumes to march for the mythical right to have the government subsidize feticide, conservatives should be able to get men and women to march against compulsory co-ed showers in the military.

We underpay these men and women and their families. We take for granted their service, forgetting how spouses and children are affected. We forget the suffering they endure when grievously injured in war. And then we say virtually nothing while a small group of biological-sex-rejecting persons with perverse desires impose their twisted, truth-denying vision of human nature on the rest of our young soldiers.

This anarchical sexual revolution is the most significant revolution in the history of the world and we treat it like another offensive Hollywood movie. Never in the course of human history has a society denied the reality, immutability, and meaning of the sexual binary. Subjective feelings do not trump reality. If Americans can’t be roused to defend the meaning of sexual differentiation—and yes, that will require enduring Leftist ire in the service of perversion—America doesn’t deserve to survive as a nation.

No matter how Americans feel about President Trump, his tweets, or his positions on other issues, the position he expressed this morning is something for which all Americans who care about the military should be thankful. And they should express their thanks to him.

Take ACTION: Click HERE to send President Trump a message thanking him for protecting the integrity of the military and preserving a strong national defense. Thank him for listening to our generals and military experts.