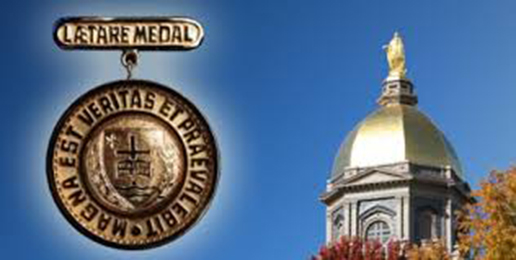 Letter to University of Notre Dame About Medal Award to Biden
03.09.16
PRINT

The Laetare Medal is awarded each year to American Catholics “whose genius has ennobled the arts and sciences, illustrated the ideals of the Church and enriched the heritage of humanity.” This year, one of the two recipients was Vice President Joe Biden. With your award of the Laetare Medal to Mr. Biden, I am once again stunned that you choose to celebrate a politically influential person known for his ability to make moral compromises which abet the ongoing destruction of millions of children. I had hoped once was sufficient.

By your entirely unnecessary action, you again disappoint and darken the hopes of many Catholics that you would finally raise the official voice of the University of Notre Dame and take a public stand for the simple message of loving and protecting all God’s children, including the unborn.

I am—once again—stunned at your willingness to downplay Catholic teaching about the sanctity and dignity of human life so that you may give an award to a politically prominent abortion supporter who readily admits that human life begins at conception and who yet does nothing in his considerable power to protect the innocent or speak against abortion.

As Catholic priests and leaders in the Catholic educational community, how could you possibly implement such a morally contradictory decision?

Perhaps your awarding the medal to Mr. Biden seems a smart political move, as it did when you so graced Mr. Obama. But, with many other Catholics and graduates of Notre Dame, I am, once again, astounded that you—priests ordained to model Christ and to give example of moral courage and fidelity—deliberately and gratuitously choose to celebrate Mr. Biden who, along with the party he leads, has for decades supported the destruction of children despite his admission that the unborn are in fact human beings.

I am, once again, appalled that the messages of abortion’s profound moral evil which Mr. Biden and his cohort have for years furthered are of no primary significance or overriding consequence to you. Your decision sends the message of moral indifference to this sick culture in which we live: a culture into which you should, as Catholic priests and leaders, project constant Catholic moral witness concerning above all else the Church’s profound respect for life.

Surely by now you must realize the harm you do to the unity and stability of the Church’s teaching, to the moral fabric of our country and to the reputation of the University as a once-Catholic institution.

Moreover, one might ask what moral example and insight do you offer students by celebrating the ability to make grave moral compromises? By celebrating this powerful politician who admits that abortion kills living children and then admittedly does nothing, do you deepen your students’ belief in the value and applicability of Catholic moral principles? Are Notre Dame students more intelligent Catholics as a result of your celebrating Mr. Biden’s grave moral avoidance? Is this the sort of “compromise” you find so worthy of Notre Dame’s acclaim? Is Mr. Biden the finest Catholic moral exemplar you can find in our society?

One cannot help but wonder why you did not take this opportunity to act in favor of the unborn, in favor of the children. By your celebration of such a moral compromiser, you ignore the profound harm to the unborn which an award from the University of Notre Dame fosters, both in the minds of those who favor abortion (such as Mr. Obama) and in the minds of so many countless citizens whose hapless moral judgments very often depend heavily on the example of those they see as “leaders.”

Incredibly, you have chosen to willingly ignore an opportunity to celebrate someone such as Joe Scheidler, an outstanding Notre Dame graduate who has—at extraordinary cost to himself for decades—revered human life, as the Church teaches and as Notre Dame used to stand for.

By this latest action, you sadly reduce your own moral credibility and significantly tarnish the original meaning of the Laetare Medal. You also cast a dark shadow over the practical wisdom and moral common sense of those who now award it.

God help the Church to overcome the message of moral indifference that your actions convey.