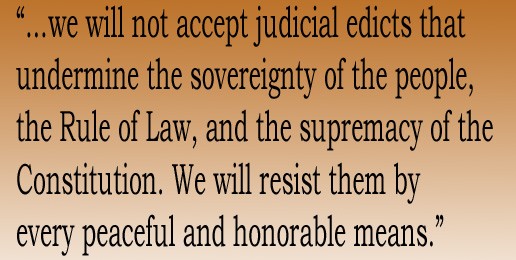 I’ve been saying that 2015 is the year of pushback, and this might be the most significant act of pushing back so far: A group of legal scholars, most of them university professors, have declared that the U.S. Supreme Court’s redefinition of marriage this past June 26th is not “the law of the land,” and they are calling on all office holders, together with all presidential candidates, to join them in rejecting the Court’s decision.

Make no mistake about it: This is really big news.

These scholars, who teach at schools like Princeton and Oxford and Notre Dame and Boston and Boston College and Michigan State and Kansas State and Vanderbilt and Hillsdale and the University of Toronto and the University of Nebraska, state that the Court’s decision “has no more claim” to being the law of the land “than Dred Scott v. Sandford had when President Abraham Lincoln condemned that pro-slavery decision as an offense against the very Constitution that the Supreme Court justices responsible for that atrocious ruling purported to be upholding.”

They note that “Lincoln warned that for the people and their elected leaders to treat unconstitutional decisions of the Supreme Court as creating a binding rule on anyone other than the parties to the particular case would be for ‘the people [to] have ceased to be their own rulers, having to that extent practically resigned their government into the hands of that eminent tribunal.'”

They also cite James Madison, who in 1788 had this to say about the balance of powers: “The several departments being perfectly co-ordinate by the terms of their common commission, neither of them, it is evident, can pretend to an exclusive or superior right of settling the boundaries between their respective powers.”

But these professors and lawyers are not simply making a philosophical statement about the Court’s Obergefell v. Hodges ruling.

They have issued a call for action, reminding “all officeholders in the United States that they are pledged to uphold the Constitution of the United States, not the will of five members of the Supreme Court.” They also call on “all federal and state officeholders” to “refuse to accept Obergefell as binding precedent for all but the specific plaintiffs in that case.”

They urge these officeholders to recognize the right of each state to define marriage, to “pledge full and mutual legal and political assistance to anyone who refuses to follow Obergefell for constitutionally protected reasons,” and to “open forthwith a broad and honest conversation on the means by which Americans may constitutionally resist and overturn the judicial usurpations evident in Obergefell.”

To repeat: This is big, and it gives further legal, moral, and Constitutional teeth to the first and fourth principles laid out in Outlasting the Gay Revolution: Never Compromise Your Convictions and Refuse to Redefine Marriage.

These scholars have also issued a fourfold call to all presidential candidates, urging them to:

To help send this critically important message to all the presidential candidates, join me in signing this statement here, and let’s pray for a continued spirit of revival in the Church and awakening in the society.

Preserving the meaning of marriage and restoring the sacredness of marriage must be among our top priorities if we want to see America become healthy, and as disciples of Jesus, we can do nothing less.

This landmark action by these scholars could be another spark that will help fan the flames of a gospel-based moral and cultural revolution.

This article was originally posted at the ChristianPost.com