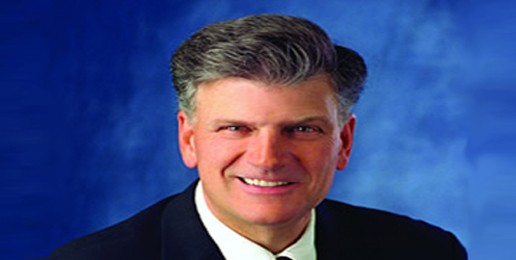 The Rev. Franklin Graham, who is also CEO of humanitarian relief group Samaritan’s Purse, has backed the position of many Kenyan churches on homosexuality being a sin, and accused American President Barack Obama of promoting the “gay and lesbian agenda” to other nations.

“I didn’t know that we were sending our president halfway around the world to promote the gay and lesbian agenda! Samaritan’s Purse has an office in Kenya and has worked there many years, and I can tell you that the churches in Kenya know what the Bible says about homosexuality — it is a sin. Sin should not be embraced, but recognized truthfully for what it is and for its serious consequences,” Graham wrote in a Facebook post on Sunday.

“As a world leader, the United States of America is now exporting the acceptance of immorality via our president. What will the cost of that be?” he asked.

Graham’s comments refer to a speech Obama and Kenyatta made on Saturday during Obama’s visit to Kenya, when the American president called on Africa to embrace gay rights.

Kenyatta countered that gay issues are not of prime importance in Kenya, where homosexual acts are illegal and carry punishments of up to 14 years in prison.

“Kenya and the United States share so many values; our common love for democracy, entrepreneurship and value for families,” the Kenyan president said.

“There are other things that we do not share; our cultures, our societies do not accept. It is very difficult to impose on people that which they themselves do not accept. This is why I repeatedly say that for Kenyans today, the issue of gay rights is really a non-issue.”

Obama had been warned both by Kenyan politicians and mainstream church pastors that he should not “preach” on gay marriage acceptance during his visit.

Earlier in July, lawmaker Irungu Kangata told traditional marriage demonstrators in Nairobi that Obama needs to “shut up and go home” if he is to talk about the “gay agenda.”

Additionally, close to 700 pastors in Kenya signed a joint-letter in May asking Obama not to bring the “homosexuality debate” to their country.

“We would like to send a strong message to the U.S. president that the homosexuality debate should not become part of his agenda, as it has been his tendency whenever he comes to Africa,” Bishop Mark Kariuki of the Evangelical Alliance said at the time.

“[Obama] should respect the faith, culture and people of Kenya when he comes in July,” he added. “He should not put [homosexuality] as one of his main agenda[s] in the country.”

Obama landed in Ethiopia on Sunday as he continues his African trip, becoming the first ever American president to visit the continent’s second most populous nation.