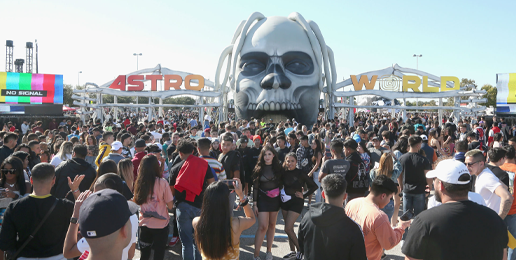 Tragedy struck a large concert in Houston on November 5th when many fans at the Astroworld Fest 2021 were trampled and crushed as they rushed forward toward the stage. On the surface, this catastrophe appears to be due to a poorly planned event with a severe lack of security. However, as numerous reports have surfaced, it seems the concert was filled with demonic idolatry and perhaps was intended to be a Satanic ritual.

The headliner for the concert was rap artist Travis Scott. Rumors regarding Scott’s interest in the occult, even Satanism, have long circled social media. Although these rumors cannot be confirmed, the imagery at the concert was undoubtedly demonic. As concert attendees entered the venue, they walked through a giant sculpted head with an open mouth which represented Scott. This image is reminiscent of paintings by Hieronymus Bosch, a painter from the Middle Ages well known for frightening and bizarre scenes of Hell. The stage was an upside-down cross which entered a portal some have compared to the CERN Particle Collider located in Geneva, Switzerland. Inside the portal, a banner hung that said, “See You on the Other Side.”

The imagery did not end with the stage design. During the concert, eight pyrotechnic flames shot off along the stage. There was also a screen with the image of a fiery dragon (others have compared the image to a bird). Even Scott himself wore a t-shirt with graphics of blue human-like figures passing through a door and turning into red demon-like figures. Scott has a long history of using such imagery and hosting violent concerts.

Before the concert even started, fans rushed through the gates, knocking over barriers. The venue was supposed to hold 50,000; however, Houston Fire Chief Samuel Peña stated that as many as 200,000 people may have been present. Scott has encouraged his fans to overwhelm entrance gates in the past. At a Chicago concert in 2015, he had fans rush the gates. In another show, he encouraged a fan to jump from the second-floor balcony, and at that same show, someone pushed a fan from a third-floor balcony, leading to his paralysis. The rapper was charged in 2015 with reckless conduct due to his behavior at Lollapalooza. In 2017 he was arrested in Arkansas for encouraging fans to bypass security. Clearly, Scott has a long history of disregard for safety and security.

When Scott took the stage at Astroworld at 9 pm, the crowd surged forward. Immediately, problems arose as people were compressed together, some falling over, crushed in a sea of bodies. Those in attendance said people were screaming for help. Fans began chanting, “stop the show.” Videos on Tik Tok and YouTube show fans trying to get the attention of security guards, even asking the camera operators to stop the show. One woman fell unconscious directly in front of Scott. He mentioned that the woman needed assistance, but rather than stopping the show, Scott began to chant over the woman as her body was removed. Fans noted they had never heard Scott sing or rap in that manner before.

Not only did Scott ignore the plight of this one fan, but he also ignored his security team when they came to the stage to inform him of the problems. As the crowd cried out for help, Scott said, “y’all know what you came to do.” He also encouraged the group to “put a middle finger up to the sky” and make the “ground shake.” The rapper, using explicit language, called the scene “beautiful” as the emergency personnel removed a victim. Scott has claimed that he did not know what was happening. Yet, the ignored pleas for help and statements from those present indicate that Scott was fully aware of what was occurring. The show continued for an additional thirty minutes as security and emergency personnel attempted to help victims.

Ten people, ranging in age from 9 to 27, have died from injuries they suffered at the concert. Twenty-five people were admitted to hospitals that night, several in cardiac arrest due to compression asphyxia. A field hospital that was set up for the event treated hundreds of others for various injuries. Almost two weeks after the tragedy, some concert victims remain hospitalized.

Attendees have taken to social media, with many saying their Astroworld experience was like being in Hell. One fan said she passed out briefly and felt as if she were on fire. Some of the attendees said they believed that Scott was “the devil” and a human sacrifice. Others have posted videos and claim they can see spirits or demons in the film footage. Although this video footage has not been authenticated, the concert certainly was a place of darkness.

Musicians in the rap and rock genre have often used satanic imagery for shock value. Certainly, Christians do not condone the use of demonic symbolism, even for show. Nonetheless, the events of this concert went well beyond shock value and imagery. While it is unknown if Scott intended this event to be a ritual, the musician’s history and complicit behaviors are suspect. The imagery alone was enough to open the door to demonic activity. Sadly, these events entice young people because of the symbolism and darkness they present.

As many people struggle to understand the events in Houston, we should be sharing the light of the gospel with them. Pray for the people who were injured and for the families of those killed. Especially pray that these people will give their lives to Christ and denounce the evil which they participated in previously. Christians are in the midst of spiritual warfare and must remember Ephesians 6:11-12:

As a result of this terrible event, many young people caught a glimpse of evil and Hell. As Christians, we must now shine the light of Jesus Christ into that darkness as Matthew 5:14-16 tells us:

You are the light of the world. A city on a hill cannot be hidden. Neither do people light a lamp and put it under a bowl. Instead they put it on its stand, and it gives light to everyone in the house. In the same way, let your light shine before men, that they may see your good deeds and praise your Father in heaven.

Our light and our praise of Jesus must be strong enough to keep our kids from being enticed into Hell by evil musicians like Travis Scott.