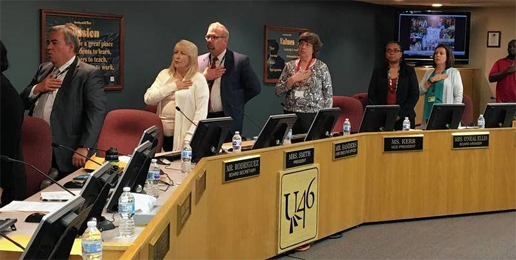 Traci O’Neal Ellis during the Pledge of Allegiance
Where Were Conservatives on Monday Night?
Written By Laurie Higgins   |   10.05.17
PRINT

Following a contemptible Facebook post by the now nationally infamous School District U-46 school board member Traci O’Neal Ellis in which she asserted that the American flag means no more to her than toilet paper, Monday’s board meeting saw a slew of impassioned comments most of them in support of Ellis. Most, however, failed to address the crux of public outrage: The public is outraged by the incivility of Ellis and by her myopic, imbalanced view of America.

Fifteen people spoke, twelve in favor of Ellis and three in opposition to Ellis’ comment. One of those fifteen people, Megan Larson, spent her entire time criticizing board member Jeanette Ward for condemning Ellis’ offensive comment–a comment condemned by many news outlets including the Daily Herald.

My question is, what the heck is wrong with conservatives? How can Ellis’ comment, which elicited national condemnation, including from former governor Mike Huckabee, motivate only three people to speak at a board meeting?

The meeting began as always with a recitation of the Pledge of Allegiance during which Ellis was the only member not to cover her heart.

There are seven rules in the Board Members’ Code of Conduct which also form the basis of the board members’ oath.

The code states that “members of the board of education shall represent all school district constituents honestly and equally and refuse to surrender responsibilities to special interest groups or partisan political groups.”

I ask if implying that parents, staff, and students are Marxists, and radical Leftist extremists is apolitical.

The code states that “members shall take no private action that might compromise the board or the administration and shall respect the confidentiality of privileged information.”

I ask if twice issuing a call to outside agitators is apolitical.

“Members shall encourage and respect the free expression and opinion of other board members.”

I ask if taking private information and posting it publicly and then continuing to post 7 times in 4 days on the same topic is apolitical.

The failure to uphold this oath makes one unfit to represent the students and families of U-46. In my opinion, if one refuses to follow the tenets of the oath they [sic] took, they should be reprimanded.

Larson must have turned off her irony/hypocrisy detector when she wrote this.

So, here are my thoughts about Larson’s thoughts:

You’ll recall, [Ellis] was the Elgin Area School District 46 board member who said on Facebook that the American flag represented “nothing more than toilet paper” to her. An apology was warranted for that appalling statement….

Unfortunately, her apology had a lot of qualifiers, including one that needs further review.

Ellis seems to think that because she made her statement on her personal Facebook page, it shouldn’t be a factor in her public role as a school board member.

“I make no apologies for my comment about the flag. I made them as a private citizen, as a taxpayer in this country on my personal Facebook page on a matter of import in the current national discourse based upon my personal experiences,” she said.

Indeed, she has that right. But when it comes to commenting on a public forum, there can be no distinction between public and private for elected officials, especially on social media, where every post, utterance and picture can be saved in a virtual locker forever.

When you run for office, your actions — both official and personal — are open for support or criticism. Voters in Ellis’ district should and will take what she said into account when and if she seeks re-election in 2019. That will be the consequence of her free speech rights.

At the end of the public comments, Ms. Ward offered an eloquent and moving defense of American ideals and a brief critique of the offensiveness of Ellis’ toilet paper comment. Then Ellis followed, providing further evidence of her unprofessionalism, incivility, childishness and vindictiveness.

Ellis began her statement with a formal salutation that included “teachers, staff, students and families in U-46,” nine district administrators by name, and all school board members by name—except Jeanette Ward. I have never witnessed anything as mean-spirited, immature, and unprofessional at a school board meeting as Ellis’ salutation.

In the body of her pseudo-apology, Ellis said to the aforementioned persons that she was “sorry” for her inelegant language and for unintentionally causing a “distraction.” Then she patted herself on the back for attending the meeting despite having been warned that it would be a “modern day lynching.” (Where’s an eyeroll emoji when you need one?) Painting criticism of her comments as a modern day rhetorical lynching is a cunning way for Ellis to silence her critics. So, what would Ellis call the vitriol spewed at Ward by her and her fans? Hmmm…

Despite how tenaciously Ellis tries to color the controversy as a denial of her liberties, the issue at the heart of this dust-up has never been the First Amendment. Rather, it’s about Ellis’ unprofessionalism, divisive and inflammatory vulgarity, and her ignorant lack of appreciation for the principles for which the American flag stands even when citizens—including Ellis—fail to perfectly embody them. It’s about Ellis’ refusal to recognize or acknowledge the remarkable strides America has made in deracinating racism. And it’s about the terrible example Ellis sets for students. The fault lies not with Jeanette Ward for exposing yet more ugly words from Ellis but with Ellis for uttering them.

And to Ms. Larson: If we at the Illinois Family Institute are the “outside agitators” to whom you referred, rest assured that no one issued a call to us to cover this unfortunate incident. Like press outlets all over the country (we were not first), our actions were impelled by the words of Traci O’Neal Ellis, who has demonstrated repeatedly that she is unfit for her position on the U-46 School Board.

Kneeling Down for Our Anthem is Standing Down on Our Responsibility