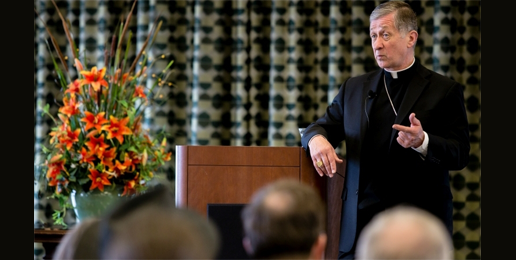 The Illinois Family Institute has warned repeatedly about the failure of faith leaders to lead properly on matters related to homosexuality and the “trans” ideology. These failures are found in most Protestant denominations and the Catholic Church. A recent interview with Chicago Cardinal Blase Cupich reveals part of the reason many Catholics lack biblically informed views on these matters.

[Amoris Laetitia] asks people to have an adult spirituality….to realize that in some way you have the grace, by God, to discern truth in your life in terms of where the Lord is calling you to the next step. It does put the responsibility on each individual, rather than an outside authority telling people what to do as if they were children. What the Holy Father is calling us to, what the Church is calling us to now is to be able to take responsibility for our lives and that means making sure people understand the freedom of conscience but also the responsibility that goes with it. So, this really, I think, is a movement to moving out of adolescent spirituality into an adult spirituality. That’s a big significance and it’s been going on since the Second Vatican Council.

Cardinal Cupich’s statement, however well-intentioned, is a worrisome summary of present day Catholic relativism. Indeed, he adds significantly to the magisterial relativism which is unraveling the Church at all levels, from Baltimore’s Fr. Joseph Muth and his celebration of lesbian marriages to Cardinal Cupich’s notions of an “adult” Catholic to Pope Francis and his oft-confusing commentaries.

As a psychologist for fifty years (with a theology background), I believe the comments of Cardinal Cupich are astonishingly naive and reveal incomprehensible ignorance of 1) human nature (even so-called “adult” human nature), 2) the deep and enduring impact of our morally-tattered culture’s agencies and their profound effect on moral and intellectual growth, and 3) fundamental psychological facts relating to human development (e.g., in the realm of psycho-sexual identity, many persons continue to evolve well into their adult years, not to speak of the plethora of moral aberrations which are now commonplace).

These and a dozen more reasons clearly reveal and starkly underline the fact that we humans need the guidance of the organized Church all the years of our lives. We have only to look at the morally derelict conditions in our United States for stunning evidence of the corrupting results of relativism in public and private realms, corruption and violence wrought by educated “adults,” many of whom claim to be Catholic, many of whom claim both maturity of years and purity of “discernment.” But any experienced and candid spiritual director will attest that discernment is an elusive and often precarious quality which is so often missing even among those who are spiritually motivated and deeply prayerful.

In the world of human realities, Cardinal Cupich opens the door to moral nihilism and calls it “adult” Catholicism. This is astonishing. It is a recipe for institutional disaster for the Catholic Church and for the society which the Church supposedly is called to evangelize. It is also a recipe for moral isolation of individuals, as is (or should be) already evident to those who have eyes and will see.

The notion of “discernment,” in the generic, come-get-yours manner in which ecclesial relativists are using it, is a near-frivolous example of a lack of discernment, a psychological and moral anomaly. It is a misguided, if well-meant, idea (“offensive to pious ears” as older moralists used to say) to suggest that at some point in life, we can safely detach from the theological traditions and moral restraints of Catholicism because we have, at last, decided that we have attained Our Responsible Adult (transgendered? thrice-married? GLBTQ? goat-loving?) Self.

Given the topsy-turvy morality of our culture, one cannot fathom why Cardinal Cupich would promote the probability of even greater moral anarchy. The cumulative evidence over many decades now strongly indicates that major elements within the Magisterium (i.e., the Church’s official teaching authority of the bishops in unison with the Holy Father) are, at the very least, profoundly confused about their prophetic role in our culture. They seem to be in substantial doctrinal flux or in a state of political correctness about their fundamental moral responsibilities to the Church, reluctant to attest forthrightly to their Christocentric pastoral responsibilities to Catholics and to the larger secular culture in which the Church supposedly evangelizes (or used to).

A contrary condition of moral, doctrinal, and canonical relativism is what is involved in and represented by this Cupich statement. He and a number of Francis’ appointees to the Magisterium are changing the Church in radical ways. One cannot but be concerned about the degree to which relativism has been embraced by the first ranks of the teaching authority of the hierarchical Church Christ founded. Laity are unable to make any impact or even be listened to, and yet it is clear that the laity can offer profound enlightenment to Church leadership.

Perhaps the Church is meant to devolve into a state of dispirited chaos about 1) its moral and doctrinal identity and 2) about the reliability—if not the stability and validity—of its leaders, following the model of the Episcopalians and other morally fragmented assemblies. If so, we are clearly on that path, and it is the relativism, silence, and passivity of ecclesiastical and clerical leadership that are taking us there.