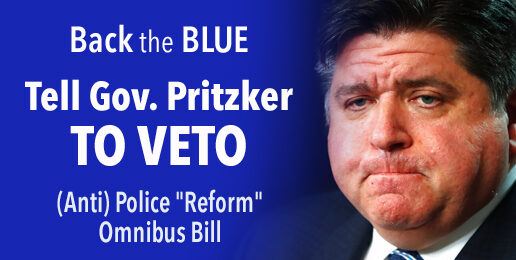 We are displeased to report that this week our state lawmakers passed a 700+ page police “reform” bill. This piece of legislation was passed in the final hours of the lame duck session of the 101st General Assembly. The proposal was approved by the Illinois Senate just before 5:00 a.m. Tuesday with a vote of 32-23, and approved by the Illinois House with a 60-50  vote the next day, just an hour before the inauguration of the new 102nd General Assembly.

According to an article in The Daily Journal, state lawmakers failed to work with law enforcement officials to create this “reform” legislation. Kankakee County Sheriff Mike Downey said,

I’m not disappointed that the bill passed. … I am disappointed that no one brought law enforcement to the table when creating this bill. Working together is important. It helps you succeed in improving things.

James R. Black, President of the Illinois Association of Chiefs of Police issued a statement saying,

[W]e are extremely disappointed by the process, the lack of discussion and collaboration with members of law enforcement by our law makers, and the ultimate voting outcome in the Illinois General Assembly. … Earlier language in this bill would have destroyed our profession. While some of that language was stricken, there are still some provisions in this bill that will make our communities less safe.

Some of those provisions in this bill, which now goes to Gov. J.B. Pritzker, include the following:

The Chicago Sun-Times also points out that the “bill requires police officers to be licensed by the state, an idea that was championed by state Attorney General Kwame Raoul.” This is part of the provision that requires ongoing education and training requirements, with no money to pay for the costs–that is, another unfunded mandate–and no assurances the courses will be offered.

Take ACTION: Click HERE to send a message to Governor J.B. Pritzker to ask him to veto the Criminal Justice Omnibus bill, HB 3653.

You can also call the governor’s office at (217) 782-6831 to voice your opinion. This legislation would negatively affect our families, our communities, and especially the heroes who work tirelessly in law enforcement.