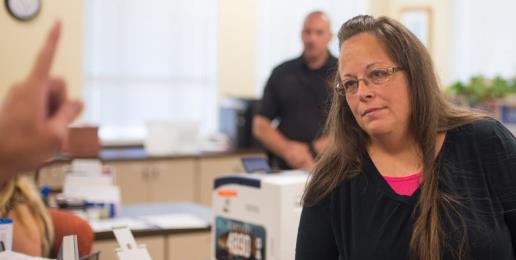 Bunning’s ruling against the students, a direct ban on free speech, was overturned on appeal.

The Times admitted this fact only later in the story, noting that Bunning’s ruling forcing students into the “anti-harassment sessions” was “overruled by an appellate court.”

The fact that he “was overruled by an appellate case” demonstrates how wrong his ruling was.

It is this out-of-control judge who is at the center of the Kim Davis case. Ironically, the media are reporting that Bunning is a Christian. If so, he has no fundamental understanding of how Christians helped create this nation, and are entitled to the rights and liberties guaranteed to them under the Constitution.

The Times’ handling of this case reflects how the actions of Davis have also been distorted by most of the media. The Times said Bunning sent Davis to jail for “refusing to issue same-sex marriage licenses.” In fact, she had simply exercised her religious rights and liberties in refusing to sign the gay marriage licenses.

Her attorneys at Liberty Counsel noted, “Davis only asked that the Kentucky marriage license forms be changed so her name would not appear on them.” This simple request was deemed to be “contempt” and she was thrown in jail.

What we see in the case of Judge Bunning, under pressure from the gay lobby, is a pattern of discrimination against Christians, a pattern we also see in the coverage of the cases in which he has ruled. The media have refused to respect the rights of free speech and freedom of religion that Americans are supposed to have under the Constitution.

A rally in support of county clerk Kim Davis has been announced for Tuesday, September 8, at the Carter County Detention Center in Grayson, Kentucky at 3:00 p.m. The address is 13 Crossbar Road, Grayson, Kentucky.

Heather Clark of the Christian News Network first noted that Bunning, appointed to the federal bench by President George W. Bush, had, in the Boyd County case, “ordered Kentucky students to be re-educated about homosexuality despite their objections.”

In the case, she noted, a number of students objected to being forced to watch a video that asserted that it is wrong to oppose homosexuality and that a person’s sexuality cannot be changed. Clark reported, “They discovered that they could not opt-out of the training without being penalized, and contacted the legal organization Alliance Defending Freedom (ADF) for assistance.”

That began the process of filing suit, and eventually the Sixth Circuit Court of Appeals overturned Bunning’s ruling in October 2007.

Republican presidential candidate Mike Huckabee has sided with Davis, saying she not only has the right to object on religious grounds to signing gay marriage licenses, but that the Supreme Court did not in any sense make gay marriage the “law of the land.”

Numerous experts have pointed out that, under the U.S. Constitution, the U.S. Supreme Court cannot make law. The U.S. Supreme Court’s “power to offer opinion does not equal the power to make law,” notes the Tenth Amendment Center. Generally speaking, experts say, the Supreme Court can overturn laws and executive actions but it cannot enforce its rulings. The power to make law is given to the representatives of the people in the national and state legislatures.

Huckabee says Davis, a county official elected as a Democrat, should be immediately released from federal custody. “Exercising religious liberty should never be a crime in America,” he says. “This is a direct attack on our God-given, constitutional rights.”

Huckabee said, “Kim is asking the perfect question: ‘Under what law am I authorized to issue homosexual couples a marriage license?’ The Supreme Court cannot and did not make a law. They only made a ruling on a law. Congress makes the laws. Because Congress has made no law allowing for same sex marriage, Kim does not have the Constitutional authority to issue a marriage license to homosexual couples.”

Kentucky passed Amendment 1 in 2004, prohibiting recognition of same-sex marriages. It passed by a 75-25 percent margin.

Another Republican presidential candidate, Texas Senator Ted Cruz, called the order issued by Bunning to use federal marshals to arrest and jail Davis “judicial lawlessness [which] crossed into judicial tyranny.” He explained that “the government arrested a Christian woman for living according to her faith. This is wrong. This is not America.”

He added, “I stand with Kim Davis. Unequivocally. I stand with every American that the Obama administration is trying to force to choose between honoring his or her faith or complying with a lawless court opinion.”

Indeed, as AIM reported, Scalia had called the Supreme Court decision in the same-sex marriage case a judicial “Putsch,” an attempt to overthrow our form of government. Scalia said the court was a “threat to American democracy.”

In the face of this emerging judicial dictatorship, Kentucky clerk Kim Davis exercised her religious rights and liberties, only to be sent to prison.

Her attorney, Mat Staver of Liberty Counsel, reports, “Despite being held as a prisoner for her religious beliefs, her conscience remains unshackled. Liberty Counsel will challenge Judge Bunning’s contempt order and her unlawful confinement. Kim is resolute in her decision to challenge the issuance of any marriage certificate bearing her name without her authority.”

As the coverage by The New York Times indicates, however, Judge Bunning is being greeted with fawning attention in the Davis case because he had muzzled Christians previously for standing up for their faith. The coverage demonstrates that there is a pattern of anti-Christian activity on the federal bench and in the media.

This article was originally posted at the Accuracy in Media blog.

The Gift of Religious Freedom

Reflections on the Kim Davis Situation
b
a
x
r