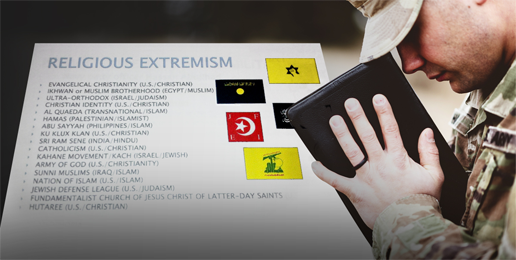 Once upon a time, the LAST place you would expect to find attacks on our constitutional freedoms would be inside the U.S. Military.

However, over the last several months, there’s been an alarming surge of anti-religious bias and censorship against military chaplains and service members who express or live out their religious beliefs.

Hiding behind the guise of combating so-called “extremism,” high-ranking officials in the armed forces are going “woke”—embracing the new culture of political correctness over our nation’s tried-and-true founding principles.

What’s most appalling is that religious service members—whose faith and beliefs inspire them to serve and risk their lives in the first place—are paying the consequences of this disturbing shift towards discrimination and silencing. Wokeism has infiltrated the military to the point of labeling people of faith as “extremists” and even threatening the destruction of their distinguished careers just for peacefully acting in accordance with their religious convictions.

Our armed forces should not be a place for political games. If the radical Left does succeed at turning the military into an experiment of its policy preferences and orthodoxy, the results could be chaotic. It’s possible that we could soon see a day when people of faith in the U.S. Military are forced to choose between their faith or serving their country.

A military that’s focused more on promoting popular political ideologies than protecting the fundamental religious liberties of America’s service members could end up doing a disservice to our country’s national security.

Consider how wokeism is a deterrent in recruitment on the front end. Department of Defense (DOD) data show that that nearly seventy percent (70%) of military service members identify as people of faith. But if the woke brigade’s anti-religious agenda gets implemented, it would essentially send a message discouraging a significant portion of religious Americans from volunteering and enlisting to serve.

What’s more, this toxic cancel culture is already taking a toll on men and women currently serving in uniform.

Recall the recent example of First Liberty’s client, Andrew Calvert, a decorated Army Chaplain of sixteen (16) years who recently used his personal social media account to express support for then-existing DOD policy banning those diagnosed with gender dysphoria from serving in the military (in keeping with his religious beliefs).

Because he expressed his own religious point of view on a private page, the Army relieved him of duty and accused him of “illegal discrimination.” These adverse actions would effectively bring Chaplain Calvert’s military career to an end.

Chaplain Calvert is by no means the only one to face career-threatening punishment.

So, instead of helping the DOD focus on its national defense mission, the woke commissars on the far Left are doing more to distract our military by using the armed forces as a testing ground for social policy experimentation.

And if any service members of faith dare to object or express opposition based on their faith, the Left will promptly bring down the hammer and ruin their reputation, career and their livelihoods.

This is truly a recipe for disaster. America’s external enemies want nothing more than to see us distracted by playing politically correct games rather than focusing on defending our nation against the very real threats to our freedom around the globe.

It is our mission here at First Liberty to protect the freedom of those who protect ours. Our military heroes deserve nothing less.

In fact, of the chaplains we’ve defended in recent years—such as Chaplain Wes Modder, Chaplain Scott Squires and Chaplain Joseph Lawhorn—First Liberty has won every one of their cases to restore their constitutional rights.

Together, with your faithful support, we will save America’s armed forces from the “woke” brigade and preserve the timeless bedrock of religious liberty for future generations.

This article was originally published by FirstLiberty.org.