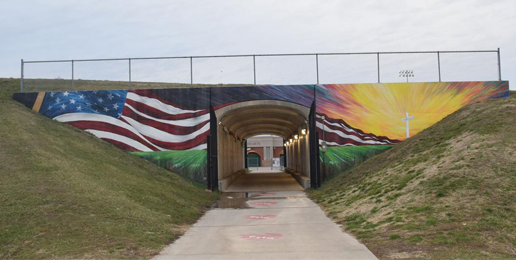 The Freedom From Religion Foundation (FFRF) has sent a letter to a south central Illinois City seeking removal of a cross from a mural painted near a local high school. A petition, which now has over 23,000 signatures, has been started to protest the effort and people in the area are rallying in support of the cross.

The mural, painted on an overpass next to Effingham High School, depicts an American flag stretching across a green landscape towards an illuminated cross that resembles “The Cross at the Crossroads,” a landmark which stands along Interstates 57 and 70. The 198-foot tall cross was installed in 2001 by a faith-based group.

According to the letter from FFRF, a local resident had contacted them with a complaint. FFRF claims that U.S. Supreme Court rulings have declared such works of art on public property unconstitutional. It further contends that “the cross has an exclusionary effect, making non-Christian and non-believing residents of Effingham political outsiders in their own community.” The letter did not outline a timeframe for the cross’s removal.

Mayor Mike Schutzbach told the Effingham Daily News in an e-mail that while the City gave approval for the mural after consulting with the school district, “it was not known to the city or school that a cross would be part of the artwork.” The mural was commissioned by the Effingham High School Football Moms and painted by local artist Jamie Stang-Ellis.

The Illinois Family Institute works to uphold religious liberty, and in this case, believes that the mural should be left as is. Earlier this week, IFI sent a letter to Mayor Schutzbach and City Commissioners offering support for the City of Effingham. The letter cites the “2005 case of Van Orden v. Perry, 545 U.S. 677, in which Chief Justice William H. Rehnquist for the Court wrote that the proper analysis to apply to the use of religious symbols on monuments/buildings is the nature of the monument/building and our Nation’s history.” These include representations of the Ten Commandments within the walls of the U.S. Supreme Court, the Library of Congress, Department of Justice, and National Archives.

IFI encouraged its recipients to “not yield to threats to rob you and your community of your rights and heritage,” and in closing, IFI pointed out that attorneys, such as those at the National Legal Foundation, stand at the ready to protect the community’s religious liberty at no cost.

At the close of the period, City Attorney Tracy Willenborg issued a statement:

“The city is of the opinion that the mural at issue does not constitute a violation of the establishment clause, as it constitutes purely private speech, having been placed by a private organization with a message that was not and has not been approved or adopted by the city. The city, however, is currently evaluating options relative to the use of the headwall, including the current mural, as well as evaluating the risks associated with each potential option.”

Take ACTION: You can send a message of encouragement to “stand strong” in the face of outside pressure to Mayor Schutzbach via email at mschutzbach@effinghamil.com. You can also leave a message for the mayor and city council by calling Effingham City Hall at (217) 342-5300.

Please pray that the fear of man doesn’t overshadow the mayor and council’s resolve to keep the beautiful mural as is.