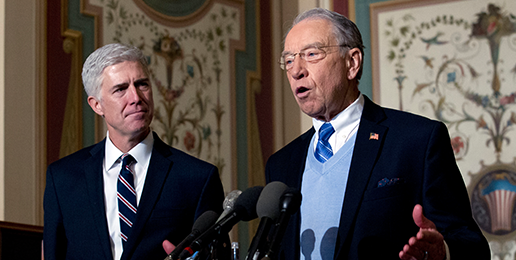 I and others have been shouting from our virtual rooftops for over a decade that there is no greater threat to First Amendment protections than that posed by the subversive “LGBTQ” movement. Can conservatives not yet see the end of the short pier toward which GOP leaders have long been pushing them? Really?

(Im)moderate Republicans, Libertarian-leaning Republicans, Republicans with dollar signs rather than Scripture reflected in their myopic eyes have been pushing conservatives toward the end of the short pier, hoping that either spines will crumble or conservatives will tumble into the dark waters. Supremacist Court Justice/lawmaker Neil-the-Usurper-Gorsuch just gave conservatives a huge shove toward the watery abyss.

“It’s the law of the land. And it probably makes uniform what a lot of states have already done. And probably negates Congress’s necessity for acting.”

Conservatives get all giddy with chills running up their legs when homosexuals like Guy Benson, Dave Rubin, Milo Yiannopoulos, and Brandon Straka express Republican-ish views. “Oh gosh, the cool kids like us, they really like us!”

Meanwhile, those smart, articulate, good-looking homosexuals seek to change the Republican Party from within—like a cancer or a Guinea worm (am I allowed to call it the Guinea worm any longer?). We welcome camels into the tent at our peril.

We shouldn’t forget U.S. Senator Rob Portman (R-OH) who supported the radical redefinition of marriage to include intrinsically non-marital homoerotic unions. Did Portman defend his betrayal of the Republican Party and biblical truth with rational arguments? Nope. He said because his son is homosexual, he now supports anti-marriage. If there’s a conflict between faith and sexual license, sexual license has got to win—says Portman. Let’s hope Portman doesn’t have any polyamorous kids.

And then there’s U.S. Representative Matt Gaetz (R-FL) who, along with his father, pushed for and passed a Florida law that legalized adoption by homosexuals without even a piddly carve-out for faith-based adoption agencies. In other words, Gaetz does not recognize that children have an inherent right to be raised by a mother and a father. Either mothers or fathers are expendable in the foolish view of Gaetz.

When Gaetz was on The View, he defended cross-sex passers serving in the military: “We shouldn’t be banning anybody based on who they are or who they love. That’s not the kind of Republican I am.” That’s leftist rhetoric that serves leftist social, moral, and political ends.

The ways socially and morally ignorant Republicans seek to transform the party are ways that pertain to our most cherished and fundamental freedoms. The result will be government schools unfit for children, loss of parental rights, loss of religious freedom, loss of speech rights, loss of association rights, loss of private spaces, loss of Christian colleges’ accreditation status, and the destruction of women’s sports.

Here’s an idea: How about those with conservative fiscal, environmental, and foreign policy views but liberal views on social policy join the Democratic Party and try to change it from within on fiscal, environmental, and foreign policy rather than  remain in the Republican Party and seek to change its position on sexual matters.

Some “socially liberal” Republicans who don’t really respect Scripture abuse Scripture to shame conservatives, saying “Well, Jesus spent time with sinners.” True enough, he did, and we should emulate what he said when spending time with sinners (which, btw, means all humans).

When with sinners, Jesus called them to repent and follow him. He didn’t affirm their sin. I can’t recall a single Bible story in which Jesus said kudos to a sinner for his sin. I suppose it’s possible that God affirmed someone’s homoeroticism before he burned them up at Sodom and Gomorrah—nah.

To love others with Christ’s love is to model his interactions with the lost. He called them to repent and follow him. There is no evidence that he went around praising those who spread lies about sexuality and marriage as Benson and Portman do.

I hope people can hear the frustration in my virtual voice as I say, what the heck is wrong with Christians who have been rationalizing their cowardly silence and capitulation for decades? Those with eyes to see have been writing for decades that First Amendment protections for Christians are slowly eroding, and just now with Gorsuch’s intellectually and constitutionally indefensible act of lawmaking, Christians are fretting about their potential loss of rights.

When “sexual orientation” and then “gender identity” were added to anti-discrimination policies and laws; when public schools started attacking conservative beliefs as “homophobia” through “anti-bullying” programs; when public school teachers started presenting pro-homosexuality novels, articles, essays, and movies to other people’s children; when SCOTUS jettisoned sexual differentiation as a constituent feature of legal “marriage”; when schools sexually integrated bathrooms, locker rooms, and sports; when foster care and adoption agencies lost the right to place children with only heterosexual couples; when schools started firing Christians for refusing to refer to boys as girls or vice versa, Christians largely said nothing. Now courts are starting to remove children from homes if their parents don’t affirm “trans”-cultic practices. And today, when the word “sex” is essentially redefined in the Civil Rights Act by six hubristic SCOTUS justices, what will Christians do?

Long before the Gorsuch decision, the erasure of public recognition of sex differences was made inevitable by the ignorant decisions made all over the country to add the terms “sexual orientation” and “gender identity” to “anti-discrimination” policies and laws. These inclusions in laws and policies—including in school policies—were aided and abetted by the silence of conservatives, and with those inclusions there now remains no way to maintain any sex-segregated spaces for anyone.

The intellectual and legal groundwork has been laid and fertilized for the eradication of all public recognition of sexual differentiation everywhere for everyone, which means no private spaces anywhere for anyone. And in those private spaces, children are likely to see biological men with gravity-defying breasts and the usual male apparatus (yes, they do that). Spend a moment ruminating on that disturbing image, for that is where conservative fear of being labeled “hater” has led us.