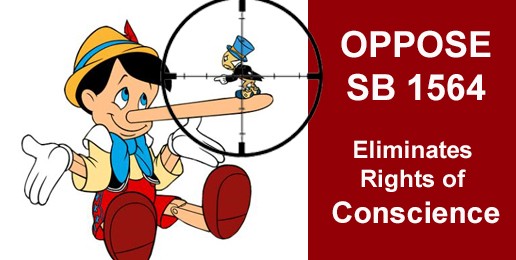 SB 1564 undermines the freedom
of conscience and invites intimidation and
legal action against pro-life healthcare providers.

Earlier this year, State Senator Daniel Biss (D-Skokie) introduced SB 1564 to radically alter the Illinois Healthcare Right of Conscience Act — an Act that allows medical personnel and health care facilities to avoid participating in morally dubious medical procedures such as abortion, sterilization, and certain end-of-life care.  Doctors, pharmacists, and other medical personnel have been protected from having to violate their beliefs and values for almost twenty years under this Act.

This week, State Senator Biss introduced Amendment No. 3 in hopes of  assuaging opponents of this bill. However, Amendment 3 does nothing to secure conscience rights.  According to the Christian Medical and Dental Associations, 95 percent of physicians in a national poll agreed, “I would rather stop practicing medicine altogether then be forced to violate my conscience.”

Take ACTION:  Click HERE to send a message to your Illinois state senator to ask him/her to please uphold religious freedom and conscience rights for medical personnel in Illinois.  Ask them to reject SB 1564.

IFI, Americans United for Life, the Christian Medical and Dental Association, Illinois Citizens for Life, and Lake County Right to Life all agree: The changes to SB 1564 are woefully inadequate.  The bill would still require pro-life doctors to participate materially in actions that violate their deeply held beliefs, such as helping patients find abortion-providers or securing other similarly objectionable procedures.

Under current law, healthcare providers are protected against participating in any phase of a healthcare service that would violate their sincerely held moral convictions, including “counselling, referrals, or any other advice …” The law respects a healthcare provider’s conscientious determination of what constitutes his or her complicity.

That same existing law already ensures patient safety is not compromised by clarifying that physicians are not relieved from a duty to “inform his or her patient of the patient’s condition, prognosis, and risks…” The law also clearly provides that healthcare personnel are not relieved from “obligations under the law of providing emergency medical care.”

SB 1564 as amended by Senate Amendment 3 uses the force of government to impose new and unnecessary obligations that are contrary to this longstanding law that appropriately protects both the freedom of conscience and patient care.

The bill additionally requires that this information on “legal treatment options” be given in a “timely manner” without defining what constitutes “timely.” All abortions, whether accomplished by invasive surgery or potent chemicals, pose significant risks to women’s health. It is also undisputed that these risks increase with gestational age. Therefore, “timely” may be construed by abortion advocacy groups to mean “immediate” with regards to abortion information, as any delay would potentially increase abortion’s risks.

Although not expressly applied to the new duties regarding referral, transfer, and information, the bill does contain a definition of “undue delay” that is defined as “unreasonable delay that causes impairment of the patient’s health.” Problematically, it fails to define “health.” In the context of abortion, federal courts have defined “health” expansively. In Doe v. Bolton, decided the same day as Roe v. Wade, the U.S. Supreme Court created an unlimited definition of maternal “health.” The Court wrote, “[T]he medical judgment may be exercised in the light of all factors—physical, emotional, psychological, familial, and the woman’s age—relevant to the well being of the patient. All these factors may relate to health.” The Court held that the abortionist alone was allowed to make this judgment.

Abortion proponents such as the American Civil Liberties Union (ACLU), the Center for Reproductive Rights (CRR), and Planned Parenthood already frequently file lawsuits aimed at intimidating and discriminating against pro-life healthcare providers and facilities. SB 1564 as amended by Senate Amendment 3 provides fodder for their coercive litigation and intimidation tactics, as well as their anti-conscience agenda.

SB 1564’s attack on the freedom of conscience advances a radical ideology and fails to meet any demonstrated need.

There is no demonstrated need for SB 1564’s erosion of the freedom of conscience that has been protected by Illinois law for decades. Rather, the bill fits a nation-wide pattern of ideological discrimination advanced by abortion proponents.

For example, the factual findings in Stormans v. Selecky, a challenge to anti-conscience Washington State Board of Pharmacy rules, document that purported “refusal stories” used to advance the coercive rules were not the result of natural encounters with access problems, but were “manufactured” by Planned Parenthood and other abortion advocates. In fact, the court in Stormans found, “no Board witness, or any other witness, was able to identify any particular community in Washington—rural or otherwise—that lacked timely access to emergency contraceptives or any other time-sensitive medication.”

SB 1564’s attack on the freedom of conscience would be counterproductive for patient access to care in Illinois.

Protecting the freedom of conscience of healthcare providers and institutions is necessary to avoid added stress on an already overtaxed healthcare system.

In a survey conducted in 2008, 91 percent of faith-based physicians agreed with the statement, “I would rather stop practicing medicine altogether than be forced to violate my conscience.”

Protecting the freedom is critical to slowing, not exacerbating, shortages of healthcare professionals and ensuring access to quality health care in Illinois.

Abortion Pills Being Sold Online
b
a
x
r