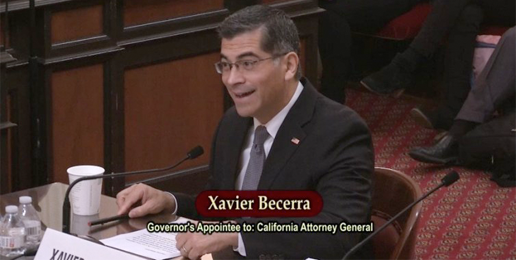 Joe Biden has announced his intent to nominate California Attorney General Xavier Becerra to lead the Department of Health and Human Services (HHS). But Becerra raises deep concerns among religious conservatives fighting to protect their First Amendment free speech and religious liberty rights. They are leary of Becerra because he defended the anti-free speech California law (AB 775), struck down by the U.S. Supreme Court, that forced pro-life care centers to promote state-sponsored abortions. They are also alarmed over comments he made before the state Assembly three years ago when he said religious liberty is only for “individuals,” not “institutions.”

California Family Council President Jonathan Keller had this to say about the nomination. “On November 7, Joe Biden claimed victory in the presidential race, saying ‘we must stop treating our opponents as our enemy.’ But his nomination of California Attorney General Xavier Becerra to lead the Department of Health and Human Services raises grave concerns,” Keller said. “The Secretary of HHS is one of the most important positions in the federal government. But Mr. Becerra is a radical ideologue who rejects First Amendment protections for religious organizations, even earning a rebuke from the U.S. Supreme Court. It’s hard to see how nominating such an activist is consistent with Mr. Biden’s pledge to be a president for all Americans.”

Becerra made his views on religious liberty known in response to questions from California Assemblyman James Gallagher during his confirmation hearing for California Attorney General on January 10, 2017. Gallagher asked Becerra what he thought about AB 775 and another proposed bill, SB 1146, which would have forced religious universities to change their housing policies and moral behavior codes to avoid punishment.

“On religious protections, the protection for religion is for the individual,” Becerra explained.  “I think it is important to distinguish between protections that you are affording to the individual to exercise his or her religion freely, versus protections you are giving to some institution or entity who is essentially bootstrapping the first amendment protections on behalf of somebody else.”

Gallagher took great exception to Becerra’s statement saying it reflected a “fundamental misunderstanding of the freedom of religion and freedom of association.” Gallagher expressed his objections on the floor of the State Assembly when he explained why he opposed Becerra’s nomination as California’s next Attorney General.

This article was originally published at CaliforniaFamily.org.