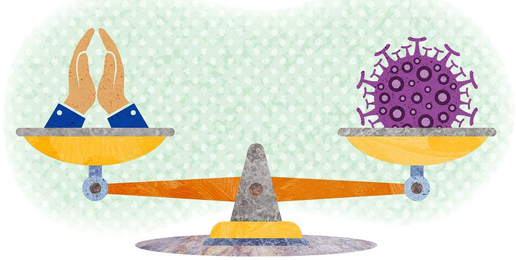 No Politician Has the Right to Dictate, Contradict or Contravene Religious Beliefs
06.03.20
PRINT

The stories have become so commonplace that they’ve almost lost their shock value.

New York City Mayor Bill de Blasio singles out churches and synagogues, threatening to seize their property and shut them down “permanently” if they dare defy his orders.

Chicago Mayor Lori Lightfoot, (working through her city’s director of public health), declares a Romanian church a “public nuisance.” “We will shut you down, we will cite you, and if we need to, we will arrest you, and we will take you to jail,” she tells this small group of former Soviet bloc Christians who refuse to bow to her power.

Kansas City Mayor Quinton Lucas issues a stay-at-home “order” that includes a “request” that all churches which choose to exercise their First Amendment rights must provide a “record of attendees” to the city and to the state.

Andy Beshear, Kentucky’s governor, warns that any state residents attending any church services will be “forced” to self-quarantine for 14 days.

Louisville Mayor Greg Fischer declares that even “drive-through” church services are prohibited. He then instructs his police to record the license plate numbers of anyone caught sitting in their car in their local church parking lot.

Vanita, Oklahoma, Mayor Chuck Hoskin issues a municipal order saying that anyone engaging in any church activity inside or outside, will be subject to a $500 fine and 30 days in jail.

New Jersey Gov. Phil Murphy responds by saying that any knowledge of the religious freedom guaranteed to these Jews by the Bill of Rights is “above his pay grade.”

Mayor after mayor and governor after governor across America have declared churches to be “non-essential” and ordered them closed under penalty of law. And yet, those who’ve haranged us for decades about the “separation of church and state” now sit in sleepy silence.

George Santayana once said, “Those who do not remember the past are condemned to repeat it.” With this as context, perhaps a bit of a history lesson is in order.

“Congress shall make no law respecting an establishment of religion, or prohibiting the free exercise thereof.”

Madison, thus, argued that it is an “essential” right of every church and not that of a “king.”

Madison’s premise was very easy to understand. No government official should ever presume to define the matters of the church. No politician or unelected bureaucrat ever has the power to “establish”, dictate, contradict or contravene religious belief or practice. This is not the government’s business. It is the church’s and the church’s alone. It is not the prerogative of our Congress or the courts to tell the church what to do or not to do.

Eleven years later, Thomas Jefferson found it necessary to reassure a small group of nervous Baptists in Danbury, Connecticut, that they did not have to fear any government intrusion into the affairs of their denomination’s polity or practice.

“I contemplate with sovereign reverence that … [the] legislature should ‘make no law respecting an establishment of religion, or prohibiting the free exercise thereof,’ thus building a wall of separation between Church and State.”

It is from Jefferson’s assurance of non-intrusion that we get our present language of separation of church and state.

Read in context, the words of Jefferson and Madison are crystal clear. In America, unlike any other nation, the church is protected from the government. There is a “wall” that provides that protection, and it serves as a fortress, not a prison. It is built to guard the church, not to confine it. This wall is no more intended to restrain religion than the walls around your personal home are intended to restrain you. As a house has a door whereby you come and go, likewise, our Constitution has a door whereby the church is always free to enter society as it chooses, but also to lock that door and keep the government out when it sees fit.

The key here is that the church holds the key, not your power-hungry governor, or your strutting little local mayor. The door is locked from the inside, not the outside. The wall is built for your benefit, not theirs.

John F. Kennedy once said that “in times of turbulence … it is more true than ever that knowledge is power.”

The COVID-19 turbulence has exposed the radical ignorance of the left. They know nothing of our history and care little for your freedom.

Remember this in November.

You have knowledge. You have power. You hold the key. It’s time to use it.