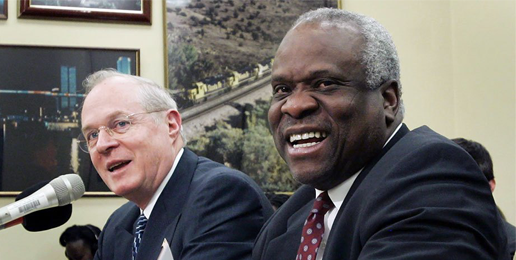 So much good news from the U.S. Supreme Court this week, including the announcement of Justice Anthony Kennedy’s impending retirement and the 5-4 decision in the NIFLA v. Becerra case, which asserts that the speech of pro-life crisis pregnancy centers is, indeed, protected speech.

Justice Kennedy surprised the nation by announcing his retirement at the end of July, giving President Donald Trump another opportunity to continue to restore respect for constitutional principles and historical American values. Perhaps we will see that proverbial long arc of justice bending more often toward justice.

Clinics that are licensed must notify women that California provides free or low-cost services, including abortions, and give them a phone number to call. Its stated purpose is to make sure that state residents know their rights and what health care services are available to them. Unlicensed clinics must notify women that California has not licensed the clinics to provide medical services.

Several crisis pregnancy centers sued, claiming that the law abridged their First Amendment speech protections. A district court voted against them, they appealed the decision, and then the nightmarish 9th Circuit Court of Appeals voted against them as well. That decision was appealed to the Supreme Court, and in a 5-4 decision with Kennedy joining the majority, the Court decided in favor of the crisis pregnancy centers.

In his concurrence in NIFLA v. Becerra, Kennedy ridiculed and scolded the California legislature:

The California Legislature included in its official history the congratulatory statement that the Act was part of California’s legacy of ‘forward thinking.’ But it is not forward thinking to force individuals to ‘be an instrument for fostering public adherence to an ideological point of view [they] fin[d] unacceptable.’ It is forward thinking to begin by reading the First Amendment as ratified in 1791; to understand the history of authoritarian government as the Founders then knew it; to confirm that history since then shows how relentless authoritarian regimes are in their attempts to stifle free speech; and to carry those lessons onward as we seek to preserve and teach the necessity of freedom of speech for the generations to come. Governments must not be allowed to force persons to express a message contrary to their deepest convictions. Freedom of speech secures freedom of thought and belief. This law imperils those liberties.

This decision means, among other things, that pro-life crisis pregnancy centers cannot be forced to communicate information that violates their beliefs.

Kennedy used this teachable moment to educate lawmakers on the constitutional limits on their pernicious efforts to abuse the law to advance their ideological views. It’s a lesson children should be taught repeatedly in government schools but aren’t.

Buried within the NIFLA decision is something even more remarkable. According to Curtis Schube, Legal Counsel for the Pennsylvania Family Policy Institute, “NIFLA also overturned speech restrictions on therapists who assist people with unwanted same sex attraction.” Schube continues:

Laws which ban sexual orientation change efforts (“SOCE” for short) have increasingly entered the national conversation, most recently in California. Before California’s recent attempts to ban all forms of SOCE at any age, California already had such a law in place for minors. The law considered it “unprofessional conduct” to “seek to change sexual orientation” for a minor. Any counselor who violated the law faced professional discipline.

California’s more recent SOCE laws take an even more extreme position. These laws ban all therapy that aims to change, or even reduce, sexual attraction to the same sex. Therefore, a patient who wants SOCE therapy cannot receive that service without risk to the professional counselor.

In Pickup v. Brown, same sex attracted minors and their parents, as well as counselors who wished to provide their services, claimed that this law violates their First Amendment rights to free speech and free expression. The Ninth Circuit, in 2013, determined that counseling is not speech, but rather professional “conduct.” The “First Amendment does not prevent a state from regulating treatment,” the Ninth Circuit concluded.

The Third Circuit upheld a similar law in New Jersey using the same logic in the 2014 case, King v. Governors of New Jersey. In relying partly upon Pickup, the Third Circuit concluded that counseling is speech (rather than conduct) but classifies that speech as professional speech. The Third Circuit states that a “professional’s services stems largely from her ability to apply… specialized knowledge to a client’s individual circumstances… Thus, we conclude that a licensed professional does not enjoy the full protection of the First Amendment.”

In the NIFLA case, the Ninth Circuit had justified the requirement for pregnancy centers to advertise for abortion as “professional speech,” just like the Ninth and Third Circuits had done for SOCE laws. The Supreme Court opinion overturning the Ninth Circuit’s NIFLA opinion, specifically identified Pickup and King as examples of “professional speech” protected by the First Amendment. Writing for the majority, Justice Thomas… stated: “Some Courts of Appeals have recognized ‘professional speech’ as a separate category of speech that is subject to different rules.” However, “speech is not unprotected merely because it is uttered by ‘professionals.’”

This is a paradigm shift in the existing precedents for SOCE bans.

Thomas seized the opportunity to provide protections to many other professions as well. “Professionals might have a host of good-faith disagreements, both with each other and with the government, on many topics in their respective fields.” He identifies doctors and nurses who disagree on the prevailing opinions on assisted suicide or medical marijuana as examples of good faith disagreements. So too are lawyers and marriage counselors who disagree on prenuptial agreements and divorces, and bankers and accountants who disagree on how to commit money to savings or tax reform. One would have to conclude that Justice Thomas’ intent is to protect all professionals from being regulated on matters of good faith disagreement.

There is no settled judgment within the mental health community regarding the efficacy and value of counseling for minors or adults who experience unwanted same-sex attraction. There is no settled judgment about the cause or causes of such attraction. Even the liberal American Psychological Association acknowledges that causation is unknown and is likely—in its view—a result of both nature and nurture. There is, however, fairly broad consensus within academia—including among homosexual scholars that “sexual orientation” is fluid. Kudos to Justice Thomas for providing a constitutional pathway to overturning bans that restrict the First Amendment speech rights of mental health professionals.

And kudos to Justice Anthony Kennedy for his week of surprises.

Incest and Pedophilia Comin’ to Town