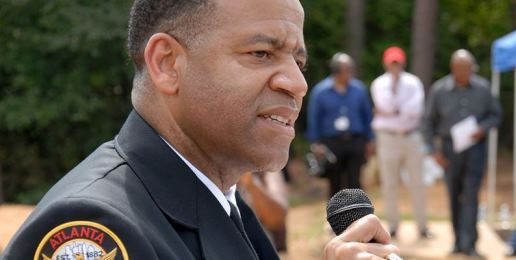 Atlanta Fire Chief Kelvin Cochran was fired from his job this week by the mayor because of his Christian views on marriage.

After serving a one-month suspension for writing a book expressing sex outside marriage (including homosexuality) as sinful, Chief Cochran faced the wrath of homosexual activists and Atlanta mayor Kasim Reed and was  publicly chastised and summarily fired from his position.

Chief Cochran, a devoted Christian, wrote a short book, a portion of which conveys the biblical view of homosexuality. He gave copies of the book, Who Told You That You Were Naked? (published in November 2013), to a few co-workers he knew to be strong Christians – but three city employees also received a copy without asking for one.

Chief Cochran said he referenced homosexuality on less than half a page in the 160-page book.

According to OneNewsNow and other news sources, the mayor was praised by openly homosexual councilman Alex Wan for terminating Chief Cochran.

“When you’re a city employee, and [your] thoughts, beliefs and opinions are different from the city’s, you have to check them at the door.” – Councilman Alex Wan

“I want to be clear that the material in Chief Cochran’s book is not representative of my personal beliefs…” – Atlanta Mayor Kasim Reed.

For his Christian faith, he was fired from his job.

A Christian brother is facing anti-Christian bigotry at its worst. The mayor and a councilman have shown their intolerance and hatred toward a person of faith, and have proved they are willing to take revenge against anyone who doesn’t embrace the pro-homosexual lifestyle.

Will you stand with Chief Kelvin Cochran by taking the following actions?

1. Sign the Statement of Support to be delivered to Chief Cochran