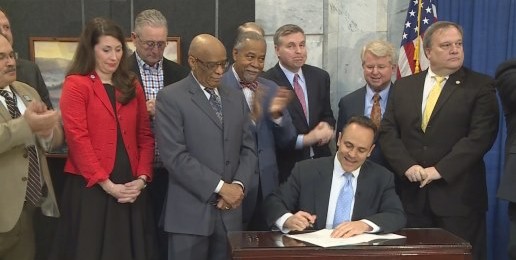 Kentucky Gov. Matt Bevin signed a bill Wednesday that removes the names and titles of county clerks from marriage licenses, giving legal “finality” to the religious accommodation that Rowan County clerk Kim Davis was looking for.

Davis, who made headlines when she spent over five days in jail last September for refusing to issue same-sex marriage licenses with her name and title on them because of her Christian beliefs, had called on the state’s then-Democratic Gov. Steve Beshear to create a religious accommodation allowing her to drop her name and title from marriage certificates that her office issued.

The accommodation, however, was not provided until Bevin, the new Republican governor, issued an order in late December allowing Davis and other religious clerks to omit their names on marriage license forms.

The American Civil Liberties Union and other critics of the governor’s order argued that any marriage license issued without a clerk’s name and title would not be valid under state law.

But on Wednesday, Bevin announced that he has provided some “statutory finality to the marriage license dilemma” by signing off on a bill that removes names and titles from the state’s marriage license forms all together.

“We now have a single form that accommodates all concerns. Everyone benefits from this common sense legislation,” Bevin said in an statement. “There is no additional cost or work required by our county clerks. They are now able to fully follow the law without being forced to compromise their religious liberty.”

Mat Staver, founder of the Liberty Counsel and the head of the legal team representing Davis, praised the move.

“To provide a license is to provide approval and places a legal authority behind the signature. We celebrate this legislative victory,” Staver said in a statement. “County clerks are now able to fully follow the law without being forced to compromise their religious liberty.”

“The First Amendment guarantees Kim and every American the free exercise of religion, even when they are working for the government,” Staver added. “County clerks should not be forced to license something that is prohibited by their religious convictions.”

Her objection, however, was not issuing the licenses but rather issuing licenses that had her name on them as the authorizing figure. After Bevin passed the executive order last December allowing her and other clerks to remove their names from marriage license forms, Davis told The Christian Post that was the accommodation she was looking for all along.

“It was the exact accommodation that I had been asking for from the very beginning,” Davis said. “The prior governor, Gov. Beshear, could have done the exact same thing.”

Davis asserted that other Kentucky laws, other than marriage laws, will need to be rewritten following the Supreme Court’s ruling Obergefell v. Hodges.