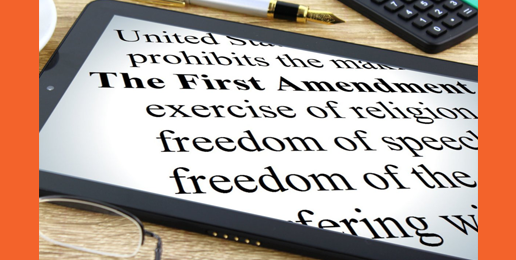 The First Amendment Is In Far Greater Danger Than The Second
03.06.18
PRINT

Our nation’s elites are waging war on the American people, wielding the institutions they’ve spent several decades capturing to punish those who disagree with their preferred positions and to deny them the ability to speak publicly, all in an effort to stifle free and open debate. And no, this isn’t a George Orwell novel — this is the United States of America.

While many still mistakenly view our political arena as a skirmish between “liberals” and “conservatives”, it would be more accurate to describe it as an all-out war between “elitists” and “populists”. As my late friend Jeff Bell argued in his 1992 book, “Populism and Elitism: Politics in the Age of Equality”, elitists believe in a top-down approach where a cadre of experts rule the country and determine what is acceptable discourse and what is not, while populists believe the people should ultimately determine the course of our politics and culture.

Traditionally, the “elitists” have always had the upper hand in this battle by controlling many of our cultural institutions, but the respect for the will of the people — exercised by the ability to elect our political leaders — remained in place. Over time, however, that respect eroded, and today, it is completely gone. Now the “elitists” find the “populists” to be repugnant, backward, and bigoted, and they believe the only way to defeat the people is to use elite institutional power in academia, corporate America, the administrative state, and the mainstream media to stifle debate, force-feed elite opinions masquerading as facts, and stamp out dissent.

For example, consider these three widely held views by the American people:

Despite their relative popularity, these views are repulsive to our elites, and in recent years, they have sought to shut down debate on all three topics by calling anti-gender ideology activists “transphobic”, anti-abortion activists “anti-women”, and defenders of the Constitution “gun nuts” who have “blood on their hands”. On the gender ideology issue, elites have been wildly successful in completely removing debate over transgenderism from the public square and even politics. On abortion, they have largely failed as pro-life sentiment among the people has proven too strong for elites to overcome. And on guns, the jury is still out, but elites are engaging in perhaps their most brazenly outrageous effort to silence opposing views to date.

It’s About Tactics, Not Issues

The battle between elite opinion and popular opinion is as old as time, but the recent tactical change among elites seeking to stifle dissenting speech is a new, and frightening, development. In a departure from the normal give-and-take of American democracy, the elites have begun using their clout within every major institution of civil society to demonize and punish their opposition — through public shaming in the media, economic extortion and retaliation by big businesses, and even criminalization of certain protest activities. And given their entrenchment within these institutions, the elites face little or no consequences for their blatant illiberality.

A case in point of this change has been the aftermath of the Parkland school shooting. Despite the complexity of the issues involved and the diversity of views held by Americans as to the proper response, the elites have pursued a scorched earth campaign against those who do not hold their black-and-white views on guns. In the news media, a narrative emphasizing the immediate necessity of national gun control legislation has become a 24-hour rallying cry, with victims of the tragedy exploited to advance this narrative and brand those who disagree as somehow complicit in the violence. Meanwhile, corporations have begun to sever ties with the NRA, sending a message that only one side of the debate is socially acceptable while the other is deserving of punishment.

A similar strategy has been playing out with the movement to normalize the Left’s gender ideology. Despite a lack of scientific evidence — and widespread parental skepticism — regarding the soundness of treating young, gender dysphoric children with highly experimental puberty blockers and hormonal treatments, elites have slowly co-opted influential medical associations in order to ensure that these treatments are not only widely adopted but also that alternative approaches to gender dysphoria are marginalized and even criminalized. Moreover, opponents of this takeover, no matter how well-grounded their opposition, are branded by the media and its self-appointed experts as “transphobes” and “bigots” while being denied any opportunity to make their arguments in a respected forum.

Make no mistake: an America with total elite control over the population and where dissent from their views is vilified is not an America at all. The gun debate is simply another battle in the all-out war elites are waging on the American people’s right to even have an opinion, let alone speak out about it and not be punished for it.

Fortunately, the American people are fully cognizant of what is taking place, which is why they voted for Donald Trump in 2016. Instead of looking at Trump and Clinton through the two lenses voters typically use, moral character and issue positions, voters applied a third lens: would their views be allowed to be articulated at all without dire consequences under a Clinton administration?

We cannot keep pretending, like so many Never Trumpers do, that we are operating in an environment of normal political give-and-take on issues. That time has passed. We are instead operating in a country now where elites demonize the populist position with such ferocity that many are afraid to voice their opinion at all, which is, of course, the entire point of their strategy. Our fight is no longer just over political issues — it is a battle against the very tactics being used by elites to stifle debate and destroy the essence of what makes America great.

Frank Cannon is the president at American Principles Project.