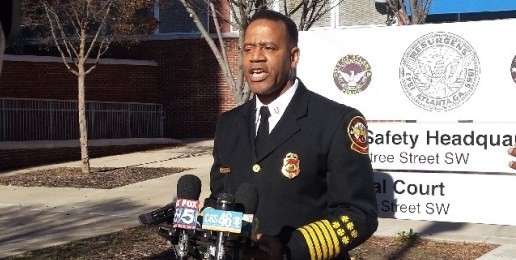 Ex-Fire Chief Who Claims He Was Terminated Over His Biblical Views on Homosexuality Sues — and Delivers a Message About ‘Freedom’
02.20.15
PRINT

Atlanta’s former fire chief who was terminated after he self-published a book that included his faith-based opposition to homosexuality has filed a lawsuit against the city in federal court. This act follows a complaint that his attorneys filed last month with the Equal Employment Opportunity Commission, citing unlawful discrimination.

Kelvin Cochran, who is being represented by the Alliance Defending Freedom, a conservative legal firm, believes that he was fired because of his Christian faith, arguing in the complaint that his freedom of religion was violated in the dismissal process.

“To actually lose my childhood-dream-come-true profession – where all of my expectations have been greatly exceeded – because of my faith is staggering,” Cochran said in a statement following the filing on Wednesday. “The very faith that led me to pursue my career has been used to take it from me. All Americans are guaranteed the freedom to hold to their beliefs without the consequences that I have experienced.”

The Alliance Defending Freedom is working with Jonathan Crumly and Garland Hunt, two allied local attorneys in the case, which was filed U.S. District Court for the Northern District of Georgia, Atlanta Division, according to a press release.

“This civil rights lawsuit is not only about restoring Kelvin Cochran’s constitutional freedoms, but the freedom of all Americans to live without fear of being fired because of their beliefs and thoughts,” David Cortman, senior counsel for Alliance Defending Freedom, told TheBlaze. “It’s ironic that some claim Chief Cochran was fired in the name of ‘diversity’ for having different beliefs than the city. That sounds more like compelled conformity and thought policing.”

As reported last month, the legal firm filed an official complaint with the U.S. Equal Employment Opportunity Commission on behalf of Cochran in January, alleging that he was discriminated against when Atlanta Mayor Kasim Reed fired him. The newly filed lawsuit ups the ante on the situation, though, solidifying a formal legal complaint about the firing.

Cochran’s dismissal in early January followed controversy over “Who Told You That You Are Naked?” a book that he self-published in which he called homosexuality “sexual perversion” and compared it to “bestiality,” among other critiques. Activists reacted swiftly to the text, sparking involvement from the mayor’s office.

While Cochran has repeatedly said that he was terminated for his religious views, Reed has offered up a very different story, claiming at a press conference last month that Cochran’s judgement was at the center of his firing, according to the Atlanta Journal-Constitution.

“I, too, am a person of very deep religious faith … 1 Corinthians 14:40 says, ‘Let all things be done decently and in order’ and I want to make very clear in my judgement that was not done here,” Reed proclaimed. “Chief Cochran’s book … was published in violation of the city’s standards of conduct, which require prior approval of the ethics officer and the board of ethics.”

While Reed claims that he wasn’t consulted before the book was written and that Cochran, who spoke out about his battle with the city to religious groups when he was reportedly told not to, isn’t being persecuted because of his faith, the former fire chief disagrees.

Cochran claims Atlanta ethics officer Nina Hickson gave him verbal permission to write the book and that he had given a copy to Reed’s office last January, the Journal-Constitution reported.

Reed launched an investigation in November after it was revealed that the book discussed homosexuality in a negative light, though Cochran was found to not have discriminated against any employees during his tenure, but his termination followed.