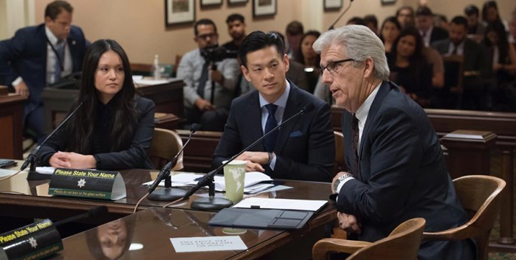 “Last year’s AB 2943 was a dangerous attack on Christian leaders, organizations, and counselors, directly targeting biblical views on sexual behavior and gender identity. That’s why it was so shocking to see a supposed leader like Kevin Mannoia supporting ACR 99, the follow-up resolution which condemns people of faith,” said California Family Council President Jonathan Keller. “California Christians love our neighbors who identify as LGBTQ. Sadly, it appears Assemblyman Low and other intolerant legislators will not stop until people of faith publicly celebrate the legislature’s preferred concept of sexual orientation and gender identity. Kevin Mannoia knows his fellow believers cannot endorse Mr. Low’s viewpoint and remain faithful to Christ. Tragically, Mannoia chose to allow himself to be used as a prop in support of ACR 99. He should know better.”

In a letter submitted to legislators, Mannoia wrote, “On behalf of some Christian pastors and church leaders, I write to express various levels of support for the Resolution ACR99 dealing with Conversion Therapy and LGBTQ persons.”

His letter also expressed his commitment to “ministry in the name of Jesus Christ rooted in the Bible as God’s word,” but he didn’t explain how Christians differ with Low on issues of sexuality. During Mannoia’s testimony in favor of ACR 99, before the judiciary committee, he reiterated his relationship with Jesus Christ as “my friend and guide” and his commitment to live “under the authority of God’s word.” But again Mannoia didn’t explain how he could believe this while supporting a resolution condemning Christian efforts to help those with unwanted same-sex attraction or gender confusion.

Mannoia testimony also commended Low for his willingness to dialog with pastors, and highlighted their shared “commitment to compassionate treatment of all peoples.” But Mannoia failed to explain how he could support a resolution that blames the “disproportionately high rates of suicide, attempted suicide, depression,” among the LGBT community on “religious groups” with biblical views on LGBT issues.

After the hearing, Low wasted no time touting Mannoia’s testimony as a gesture of full support for ACR 99 on social media. Using a staged shot of Low and Mannoia on a state Capitol balcony, the Assemblyman tweeted, “@Kmannoia, Former President of the National Association of Evangelicals & Chaplain at @azusapacific, speaks in support of #ACR99, to reaffirm our values of love and dignity while also acknowledging the harmful practice of #ConversionTherapy.” 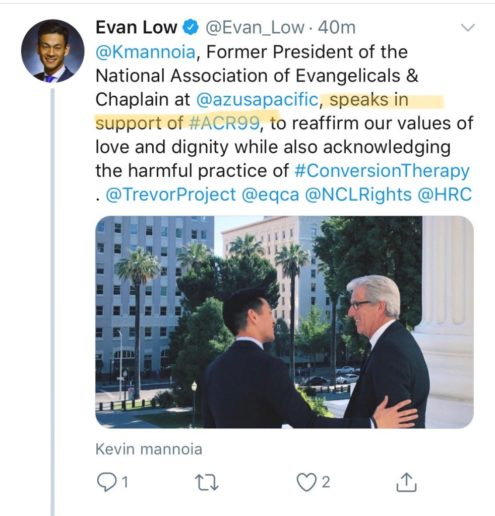 Some Christian leaders have publically reacted to Mannoia’s actions.  Author, speaker and ordained pastoral counselor Joe Dallas expressed frustration with Mannoia’s endorsement on his Facebook page. “It’s very discouraging to hear that Dr. Kevin Manoina, Chaplain of Azusa Pacific University, has testified in support of ACR 99, a California assembly resolution which essentially tells California pastors what they should or should not say about homosexuality,” Dallas wrote. “We expect Christian leaders to be about the business of saving, not caving.”

Dean Broyles, an attorney with faith-based National Center for Law and Policy, called Mannoia’s actions heresy. “This unorthodox and aberrant behavior by one of our purported evangelical “leaders” highlights the dangers of the strategy of appeasing the enemies of the gospel and freedom in Christ,” Broyles wrote. “ To shamefully join forces with the enemies of Christ, to defame all change-allowing therapy, and to surrender to the idea that people can’t change is to surrender to the satanic lie that the Gospel has no actual transformative power.  For biblically orthodox evangelicals, that is heresy.”

Last year, Assemblyman Low pulled a bill he authored outlawing “conversion therapy,”  AB 2943, after widespread complaints from Christian leaders. The bill declared “advertising, offering to engage in, or engaging in sexual orientation change efforts with an individual” as illegal under state’s consumer fraud law. Sexual orientation change efforts were defined as “any practices that seek to change an individual’s sexual orientation. This includes efforts to change behaviors or gender expressions, or to eliminate or reduce sexual or romantic attractions or feelings toward individuals of the same sex.”

Just because Low withdrew his bill from consideration, doesn’t mean he has softened his views against “conversion therapy,” which includes Christian efforts to help people leave their LGBT identities and behavior to find their worth, identity, and happiness through a relationship with Jesus. Low has just changed his strategy as he explained in a recent interview with the Desert Sun.

“My intent is still to stamp out conversion therapy, but rather to do it in a more deliberate fashion, enlisting the support of evangelical and faith leaders,” he said. “There are those in the LGBTQ community that say we shouldn’t compromise, but I think this is the best approach to changing hearts and minds.”

Two pastors who testified against ACR 99 last week haven’t changed their minds. Elizabeth Woning, pastor and former lesbian took issue with the resolutions accusation that helping people change does harm. “Because of my past, I seek to guide Christians into understanding, honor, and compassion for LGBT people.  Nevertheless, I take exception to the belief that religion is central to the high rates of suicide among LGBT youth. For me, and many others, faith rescued us from suicide. The experience of discovering you are different than most other people is traumatic and troubling whether you have faith or not. Hopelessness causes suicide, ” Woning said. (read hearing transcript)

Joining Woning at the hearing was Ken Williams, pastor, father of four, and former homosexual. He co-leads a ministry called Equipped to Love with Woning to help those wanting to leave LGBT identities. “And there are many people that find respite in LGBT community,” Williams told the committee.  “There are also many that have tried that and it did not bring what they were looking for. We encounter those people all the time.”

Concluding his testimony, Williams spoke directly to the ACR 99 author. “Assemblyman Low I am asking you, you may have the votes to pass this, but I don’t believe that you have the right to… tell [people] what they need to believe.”

“I totally support your right and everyone you represent to experience whatever in life you would like to. I have no intention to take that away. I’m just asking that my rights and my people group would also be respected.”

ACR 99 passed the Assembly Judiciary Committee with a vote of 6-2, with one legislator not voting. The resolution will now go before the entire State Assembly sometime this week before making its way to the Senate for consideration.

Other articles in opposition:

A coalition of professional counselors, doctors, attorneys, and faith-based non-profits, have also signed onto a letter pointing out the resolutions inaccuracies, and its threats to basic liberty.

This article was originally published at CaliforniaFamily.org.