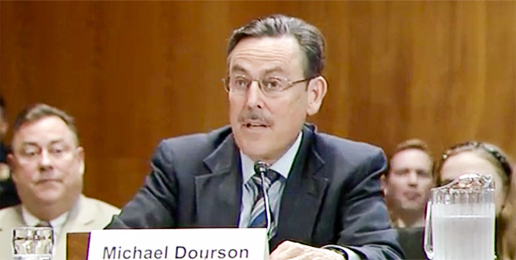 It looks like it’s open season for anti-Christian bigots to hunt down and destroy any Christian nominated to public office—especially if that Christian doesn’t toe the line of environmental political correctness. Forget Article 6 of the Constitution insisting “no religious Test shall ever be required as a Qualification to any Office or public Trust under the United States.”

Michael Dourson, whom Trump has nominated to head the federal Environmental Protection Agency’s (EPA) chemical safety office, is taking the same kind of fire. Dourson is an environmental health professor in the University of Cincinnati’s College of Medicine. He’s a “board-certified toxicologist with an international reputation for excellence in environmental risk assessment.” He’s co-published more than 150 papers on risk assessment methods and chemical-specific analyses.

But he’s also a Christian who, like any serious Christian, tries to integrate his faith with all his life. That just doesn’t sit well with some folks.

Raymond Barfield, a professor of pediatrics and Christian philosophy at Duke University, is upset. It seems Dourson wrote that chemical analysis provides some evidence that the Shroud of Turin—which allegedly wrapped Jesus in his burial—might be authentic. Dourson’s not sure. Sounds like the attitude of a good scientist to me.

But there’s more. Dourson isn’t convinced that the chemical risks from flame-retardant fabrics outweigh the fire-prevention benefits. He points out that “exposures from consumer products were much lower” than those involved in a study claiming significant risk. That’s a fairly typical weakness of many environmental risk studies. They expose laboratory animals to extremely high levels of a suspect chemical, discover ill effects, then try to extrapolate to human risk at much lower exposure levels.

Barfield disagrees, and seeks to discredit Dourson because he made $10,000 consulting for a flame retardant industry group. Dourson had questioned a study warning of potential harm from flame retardant chemicals because it hadn’t been replicated yet. That’s confusing, because replication is the hallmark of good science.

As a professor of philosophy, which usually requires some knowledge of logic, Barfield should know that attacking Dourson’s motives because of money commits the fallacy of argumentum ad hominem circumstantial. He further labeled Dourson’s argument that the risks from fires are higher than the risks from fire-retardant chemicals as “pure utilitarianism.” That label’s red meat for Christians.

At the root of the philosophy of utilitarianism is a denial of moral absolutes, which makes it incompatible with Christian faith. But Christian ethics doesn’t forbid all consideration of consequences.

Yes, Christianity teaches that some acts are wrong in principle because they transgress the moral law (1 John 3:4) and therefore cannot be justified by any appeal to consequences. But it also teaches that attention to consequences is part of wisdom: “For which of you,” Jesus said, “intending to build a tower, does not first sit down and estimate the cost, to see whether he has enough to complete it?” (Luke 14:28, New Revised Standard Version). “The prudent see danger and hide; but the simple go on, and suffer for it” (Proverbs 22:3).

Confusion Over Faith and Science, Again

Corbin Hiar, an E&E News reporter, says Dourson, who worked at EPA from 1980 to 1995, afterward “led Toxicology Excellence for Risk Assessment, a nonprofit consulting firm that often downplayed chemical hazards for tobacco companies and chemical manufacturers.” This hints at dishonesty. But if Study A ranks a risk at 88 on a scale of 1 to 100 and Study B ranks it at 44, does it follow that Study B has “downplayed” it and so is dishonest? Why not say Study A has exaggerated it and so is dishonest?

Good scientific method considers data more important than real or imagined motive. Does Hiar have any evidence that Dourson fabricated, suppressed, or otherwise misused data? It appears not. Hiar goes on to write:

In the epilogue to his 2016 book on the shroud, he said Wikipedia ‘has a vast amount of information on the Shroud, much of which seems well researched.’ Yet in the same paragraph, he adds that ‘a web search will also uncover any number of websites that offer credible, and sometimes conflicting, information. Such is the life of a walk in either science or faith or both.’

Oh, that’s troubling! Embracing “scientific uncertainty”! No scientist has ever embraced uncertainty! I guess that’s why the Intergovernmental Panel on Climate Change has a four-page document, “Guidance Notes for Lead Authors of the IPCC Fourth Assessment Report on Addressing Uncertainties,” and the words uncertainty or uncertainties appear over 100 times just in the first 58 pages of its 1,535-page “Fifth Assessment Report.”

But Hiar isn’t finished. He quotes a Christian minister who finds Dourson’s comment troubling. Rev. Mitch Hescox, president and CEO of the Evangelical Environmental Network, says, “There is a difference between science and faith. Faith is a matter of belief. Science, on the other hand, is hopefully viewed with a rational mind ….”

So does Hescox consider Christian faith irrational? That would put him in a very tiny camp even among Christian mystics—who are a tiny camp among all Christians. After all, the Apostle Paul instructs Christians to “test everything; hold fast to what is good” (1 Thessalonians 5:21). Most Christian thinkers take seriously the Apostle Peter’s admonition, “Always be ready to make your defense to anyone who demands from you an accounting for the hope that is in you” (1 Peter 3:15).

Not only are science and faith not antithetical, they’re inextricable. Science rests on faith. Indeed, it rests specifically on, and historically grew out of, the Christian worldview that a rational God created an orderly universe to be understood and manipulated by rational people made in his image.

Your Belief in God Makes You Irrational

Hiar has one other beef with Dourson, and it’s probably his biggest: “Dourson’s writing also seems to suggest a belief in the theory of intelligent design, which uses God to explain phenomena for which scientists haven’t found definitive answers.”

Hiar’s definition of intelligent design is wrong. It doesn’t “use God to explain phenomena for which scientists haven’t found definitive answers.” Instead, it argues, as microbiologist Douglas Axe puts it, that “tasks we would need knowledge to accomplish can only be accomplished by someone who has that knowledge.” That’s true whether we can explain them or not.

As Axe demonstrates in his book, refusing to recognize things that can only be the product of knowledge as the product of knowledge is a “bad frame for interpreting the data.” It’s what metaphysical materialists, naturalists, and anti-theists are forced to do by their presupposition, as mathematician, geneticist, and evolutionary biologist Richard Lewontin wrote:

It is not that the methods and institutions of science somehow compel us to accept a material explanation of the phenomenal world, but, on the contrary, that we are forced by our a priori adherence to material causes to create an apparatus of investigation and a set of concepts that produce material explanations, no matter how counter-intuitive, no matter how mystifying to the uninitiated. Moreover, that materialism is absolute, for we cannot allow a Divine Foot in the door.

Also, Never Help People Out of a Religious Impulse

But Barfield has one other objection. In defending his industry-funded research that led to his conclusion that secondhand smoke doesn’t constitute a high risk, Dourson said, “Jesus hung out with prostitutes and tax collectors. … Why should we exclude anyone that needs help?”

Barfield, apparently privy to Dourson’s inner conscience, says, “But it bothers me that someone would draw on their religious tradition to justify something that is clearly not motivated by their religious tradition.” Notice Dourson didn’t justify the study’s conclusions by that. He justified his willingness to “hang out with” a despised client. Does Barfield think everyone accused of wrongdoing has no right to be defended? And does he think every time an unsavory character is found innocent the verdict is wrong?

E. Calvin Beisner, Ph.D., is founder and national spokesman of The Cornwall Alliance for the Stewardship of Creation and former associate professor of historical theology and social ethics at Knox Theological Seminary.
This article was originally posted at TheFederalist.com